Accessibility links
Congratulations, Graduates? It's graduation season again. College students usually spend this time of year celebrating. But this year, a shrinking job market has put a damper on the spirits of many post-grads. Michael Roth, commentator and president of Wesleyan University, offers some words to put graduates back in the mood to celebrate 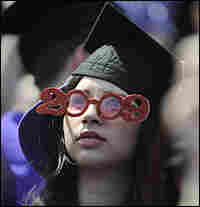 A New York University graduate student attends her graduation in New York this May. Many 2009 graduates are having trouble getting a job in the current recession. Emmanuel Dunand/AFP/Getty Images hide caption 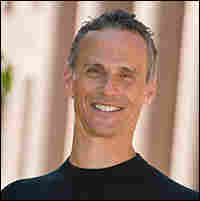 This year, as I prepared my annual commencement speech, my mind wandered back to 1978. That was the year I graduated from the school where I am now president, Wesleyan University. Back then, I was thinking about continuing my studies in history, and there were almost no jobs in the field.

I decided to talk to my father about my future. He, like my grandfather, was a furrier, and I worried that he would think it was really dumb to pursue a career with no job prospects. He surprised me, though, by saying that I ought to take a shot. "If you don't try, you'll always wonder if you made the right decision."

"If the problem can be fixed with a little money," my dad said, "then you'll find a way to do the work to fix it — no big deal. But if the problem is looking back and wondering whether you made the right life decision, well," he said, "I don't know how you'll fix that." Better to take the chance now than to have the doubts and regrets later.

I've frequently thought of my father's words when advising students. But as president of a liberal arts university, I'm often asked, "What's my son going to do with this literature major?" or "What's my daughter going to do with her degree in film studies, or in government?"

Working with college-age students makes me more hopeful than the average guy. When I hear these kinds of questions, I think of a recent graduate with a degree in Arabic who now travels around the world doing translations. And I smile as I think about Star Trek, Angels and Demons and Transformers — three big summer movies this year written by Wesleyan grads steeped in the liberal arts. Or about the young entrepreneurs developing Web sites like Unigo, or the determined policy wonks headed for alternative energy internships in Washington. All these folks have alternative energy, and they are using it!

Of course, I am not so naive as to think that college graduates this year should be grateful for the recession they face. Or am I? Many businesspeople tell me that a crisis is exactly the right time for planning new initiatives. This is what our graduates can now do: Imagine opportunities not only for making money in the next six months, but for meaningful professional work and public service that will be rewarding for years to come.

My dad was right: You don't want to look back and wonder whether you should have followed your heart's desire. Right now is the moment to imagine opportunities for work that will be meaningful for you and the community you live in.

What a great time for a new beginning! Good luck. Oh yeah — we're counting on you.