Accessibility links
Tiananmen Mothers Press For Answers, 20 Years On Grass-roots activism has grown in China in recent years. But the demands of one group continue to fall on deaf ears: the Tiananmen Mothers. The parents of children who were killed 20 years ago in the crackdown on democracy protests want a full public accounting of the incident. 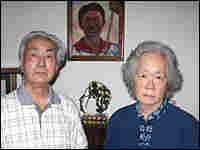 Professors Jiang Peikun (left) and Ding Zilin stand in front of a painting of their son, Jiang Jielian. He is pictured wearing a protester's headband and carrying a banner. His death at the hands of Chinese soldiers in 1989 prompted Ding to seek out other victims' parents and form the Tiananmen Mothers group. Anthony Kuhn/NPR hide caption 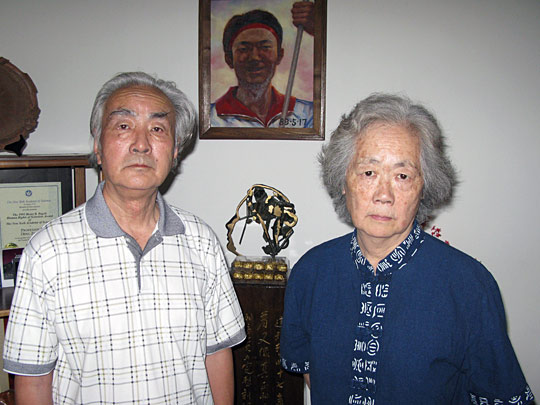 Professors Jiang Peikun (left) and Ding Zilin stand in front of a painting of their son, Jiang Jielian. He is pictured wearing a protester's headband and carrying a banner. His death at the hands of Chinese soldiers in 1989 prompted Ding to seek out other victims' parents and form the Tiananmen Mothers group. 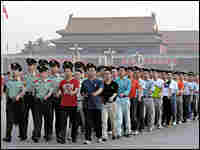 Armed police — both uniformed and plainclothes — keep strict watch in Beijing's Tiananmen Square on Thursday, the 20th anniversary of the bloody crackdown in 1989 on democracy protesters in the square. Kyodo via AP hide caption 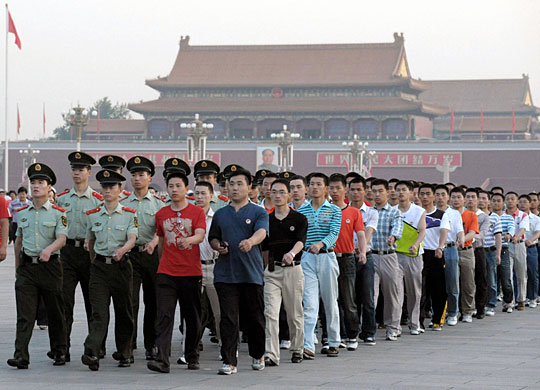 Armed police — both uniformed and plainclothes — keep strict watch in Beijing's Tiananmen Square on Thursday, the 20th anniversary of the bloody crackdown in 1989 on democracy protesters in the square. 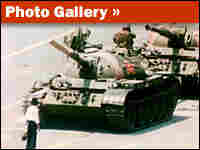 Grass-roots activism has grown in China in recent years, but one group continues to face difficulties as it deals with one of the most taboo topics in China. The Tiananmen Mothers is a group of parents whose children were killed in the crackdown on the pro-democracy movement 20 years ago.

Every June 4 since 1995, they have written to China's leaders calling for a full investigation into the incident, the right to publicly mourn their family members and the release of those still in prison for participating in the protests.

But the involvement has come at a price for one couple. Ding Zilin, a leader of the mothers' group, and her husband, Jiang Peikun, were forced to retire from their jobs at Beijing's prestigious People's University and have lived under house arrest for the past five years.

Ding says her son, a 17-year-old high school junior named Jiang Jielian, defied her. He slipped out of a bathroom window and headed toward Tiananmen Square on the night of June 3, 1989.

She recalls that he was concerned about the pro-democracy protesters after hearing news of an impending crackdown. Witnesses said soldiers shot Jiang from behind; he died on the sidewalk, west of Tiananmen Square.

Jiang's parents keep his ashes at home. Ding has tried six times to commit suicide, and she avoids talking about the details of his death to keep from breaking down.

Speaking before the anniversary, Ding said she would observe it quietly.

"On 10:30 on the evening of June 3," she said, "I'll go to the Muxidi subway exit on the north side of the street and mourn at the spot where my son fell. But two weeks ago, the national security agents told me they hope I will not go."

Reports say police barred Ding from going outside Wednesday, and attempts to reach her by telephone were unsuccessful; her phone rang unanswered on Thursday, June 4.

'I Can Face My Dead Son's Spirit'

In the years after her son's death, Ding met other parents who had suffered similar losses. She founded Tiananmen Mothers, which now represents 100 families.

Groups of aggrieved citizens banding together have been a common feature of current events in China. Parents of earthquake victims and consumers of tainted milk have received some compensation for their troubles. But the Tiananmen Mothers have had a much tougher time.

Ding says they have never received a response to their letters to the government or managed to hold anyone to account. But she says they have done what they can and ought to do.

"I can face my dead son's spirit and say that in 20 years, this group of women has defended our integrity as human beings and our rights as human beings," Ding says.

Much has changed in 20 years. Ding is now 73, stronger inside but frailer outside. She says that two decades ago, the national security agents who monitored her were a brutish bunch of ex-soldiers who cursed her as a traitor to her country. Now she says the state's iron fist is swathed in a more velvety glove, and the agents have become more polite.

"Their message is basically the same," Ding notes. "But now it's more beautifully packaged. Those ex-soldiers were uneducated and had to be replaced. The national security officer I deal with now has two college degrees."

Beijing maintains that the protests were aimed at overthrowing the government and had to be put down. Ding says that an official resolution of the Tiananmen issue is getting farther away, not closer. She says the Chinese government's position will not budge, as long as those leaders who ordered the crackdown are still alive.

Ding bemoans the government's encouragement of materialism, which she says make citizens complacent about injustice. She castigates her critics who say she should suffer in silence, or that her activism threatens China's strength and harmony.

And yet, Ding forgives young people today who choose to ignore what little information is publicly available in China about the incident that left several hundred people dead and injured.

"The June 4 massacre was too cruel," she says. "So parents have tried to protect their children by keeping them away from this forbidden topic. If I had not suffered this tragedy, perhaps I too might be so selfish. So we should not be too quick to blame these families."

No Solace From U.S.

Adding to her sense of isolation is the Obama administration's tactful approach on human rights. Secretary of State Hillary Clinton on her last visit largely avoided the issue, at least in public. Ding notes that before Nancy Pelosi became House speaker, she was a staunch critic of China's human rights situation; Pelosi was even once expelled from China for protesting in Tiananmen Square.

But on an official visit to China last week, Pelosi was careful to emphasize the need to engage China's government on issues like global warming and the financial crisis.

But Pelosi said she was proud of what she had achieved.

"Fact is, we did bring up human rights," she told reporters. "I guess it was 18 years ago now, I stood on Tiananmen Square with a banner. That was my opportunity to express the concern that I, as a member of Congress, had for human rights in China and Tibet."

"I'm now speaker of the House," she added, "and have the opportunity to speak directly to the president of China, to bring up the subject on behalf of the entire Congress."

Ding says she wonders how Pelosi must feel, having gone from almost being a prisoner of the Chinese government to being its honored guest.

"Does she feel honored, or just awkward?" she ponders.

'U.S. Needs China Too Much'

Pelosi and Clinton spoke out this week in Washington on Tiananmen. Pelosi expressed support for the Tiananmen protesters, while Clinton called on China to provide an official accounting of the dead, injured and missing, and to release any prisoners still held.

Ding says she will always remain thankful for the help of Pelosi and other supporters. But she feels that in the past two decades, the U.S.-China relationship has undergone a fundamental change.

"On one side of the balance are universal values: freedom, democracy and human rights," she says. "On the other are money, utility and pragmatism. Right now, the latter side is up high, the former down low. The U.S. now needs China too much. I feel this is shortsighted."