Accessibility links
Do Apes Laugh When Tickled? Apes often make weird sounds when they're tickled, and a new study says these noises are related to human laughter. The researchers think laughter may have evolved from a primordial, laughlike sound made by a common ancestor of apes and humans. 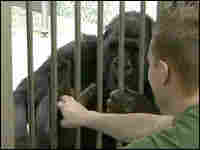 A caretaker tickles a gorilla, which elicits breathy, rumbling sounds. These noises are related to human laughter, according to a new study. Courtesy of Marina Davila Ross hide caption

Apes often make weird sounds when they're tickled, and some researchers now say these pants and hoots truly are related to human laughter.

That's the conclusion of a new study in the journal Current Biology that analyzed the "tickle-induced vocalizations" of infant and juvenile apes as well as human infants.

One of the scientists, Michael Owren of Georgia State University in Atlanta, says he was initially skeptical that the panting sounds made by tickled chimps had anything to do with the distinctive "ha ha ha" of human laughter.

"I was reluctant to think of the chimpanzee pantlike vocalizations as being laughter," Owren says. "And I did not necessarily believe that there was a common origin between those sounds and human laughter."

But then a researcher named Marina Davila Ross, of the University of Portsmouth in the United Kingdom, came to his lab with recordings she had collected of 21 infant and juvenile orangutans, gorillas, chimpanzees and bonobos, as well as three human babies.

Davila Ross says going to zoos and watching the apes being tickled was an amazing experience, because they really seemed to love being tickled and, even though their sounds were odd, they looked like they were cracking up.

"That was absolutely fascinating, how they responded to the caretakers when they were tickled," Davila Ross says.

But the question is, she says, when you listen to these ape sounds, "how can one really know that this is laughter?"

To try and find out, she and Owren analyzed 11 different acoustic features in the recordings of tickled apes.

Then, along with Elke Zimmermann, of the University of Veterinary Medicine in Hannover, Germany, they compared what they'd found to the known evolutionary relationship between these apes and humans. They discovered a revealing pattern of similarities and differences among these five related species.

"The results suggest that the evolutionary origins of human laughter can be traced back at least 10 to 16 million years to the last common ancestor of humans and modern great apes," they write in their research report.

The primordial laughlike sound of that common ancestor probably had long, slow, noisy calls. Specific features of these sounds then got exaggerated or changed over evolutionary time, as the different apes emerged.

"All these sounds do seem to have a common origin, evolutionarily speaking," says Owren, "and I am now comfortable calling them all laughter."

This raises a question: If these sounds are all laughter, what made humans develop our distinctive "ha ha ha" instead of something more like the panting of a chimp? "If human laughter has evolved in a somewhat different direction, then why did it do that? And why these features in particular?" asks Owren.

He says learning more about that could help reveal the function of laughter in human relationships. After all, people don't just laugh when they're tickled.

Robert Provine, a neuroscientist at the University of Maryland, Baltimore County who studies laughter, notes that dogs pant in a certain way when they're playing, and rats are known to chirp.

So he thinks the roots of laughter might go even further back and would like to see more studies like this one that compare different animals' playful sounds.

"I think that it's about time we get out there, start tickling the dogs and the cats, and the pigs, the rats, as well as the chimpanzees," Provine says. "I think we'll learn a lot about what we have in common, as well as our differences."

Play-associated sounds have hardly been studied in animals, says Provine. "What about whales?" he asks. "You know, do whales have some form of laughter? People really haven't looked into this."

In general, Provine says, laughter hasn't gotten a lot of attention from scientists, because it's such an everyday thing that it often goes unnoticed.

Do Apes Laugh When Tickled? Watch A Gorilla And An Orangutan Being Tickled And Decide For Yourself!