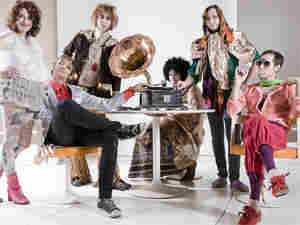 The latest album from Of Montreal emphasizes the band's funkier side. Patrick Heagney hide caption

The much-admired rockers Of Montreal are known for their energetic, over-the-top sound. Since the band's late 1990s emergence, frontman Kevin Barnes has led its musical evolution from low-fi indie, to progressive rock, and now to glam-funk on their new album Skeletal Lamping. This latest genre shift comes with the expression of Barnes' transsexual alter-ego, Georgie Fruit. The group's latest release chronicles Barnes' transformation into Fruit.

Throughout the band's career, Barnes and company have explored many themes, ranging from innocent wonder to isolation and depression. Skeletal Lamping highlights the group's funkier side, and features uninhibited experimentation with '60s pop and party beats. "I wanted to make something that was really unpredictable", says Barnes. The group will bring its tricks to the festival circuit this summer, playing both Bonnaroo and Chicago's Lollapalooza.