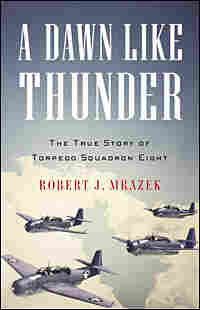 In A Dawn Like Thunder, Mrazek tells the story of Gay's squadron's victories in World War II at the Battle of Midway, and later, at Guadalcanal. "In spite of... fearful odds," Mrazek writes, "the Americans chose to confront the Imperial Navy at Midway."

Mrazek consulted surviving members of the squadron, as well as historical sources, for his book. 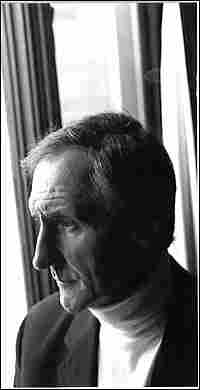 Author Robert Mrazek is a former a Democratic member of the U.S. House of Representatives for New York. Carolyn Mrazek hide caption

His first glimpse of the Hawaiian Islands was just a distant smudge on the sun-splashed sea, but it was enough for him to feel a shiver of excitement. Like many of the Navy pilots crossing the Pacific on the military transport Chaumont, twenty-four-year-old Ensign Corwin F. Morgan of Tampa, Florida, savored the prospect of high adventure awaiting him aboard the aircraft carrier USS Hornet.

They called him Smiley.

With his rugged, square-jawed face, he didn't look like a Smiley, and he didn't smile more than any other pilot in Torpedo Squadron Eight. Morgan had earned his enduring nickname at a poker game back in Norfolk, Virginia, after joining the torpedo squadron shortly before the Japanese attacked Pearl Harbor.

Rain had washed out the afternoon's training flights, and a group of pilots had started playing poker. The game went on most of the night. Morgan was an inspired gambler, and had won more than two hundred dollars when someone started dealing blackjack and he encountered a run of terrible cards, losing hand after hand. The sudden twist of luck struck him as absurd, and he couldn't stop grinning as he gave back half of what he had won.

"I can't believe you, Morgan," said James Hill Cook, the boyish-looking Southerner with the deep drawl from Grand Cane, Louisiana. "You smile when you win and you smile when you lose. From now on, I'm calling you Smiley."

Smiley Morgan had grown up in Richmond, Missouri, the self-proclaimed mushroom capital of the world. His father was the local veterinarian. One summer afternoon the boy had been dozing near a swimming hole at his grandfather's farm when he happened to gaze up and notice a flight of barnstormers doing loops and barrel rolls over the county fairgrounds a couple miles away. Like a youth answering a religious calling, he had tramped through cornfields and pastures until he finally reached the fairgrounds, where he stood mesmerized next to his first airplane.

At the University of Florida in Gainesville, he proved to be an exceptional athlete, and a not-so-motivated student. Before he dropped out of college, he joined the Civilian Pilot Training Program and earned his flying license. Deciding to join the Navy, he was accepted for flight training. After he won his wings in Pensacola, Florida, Morgan was assigned to Torpedo Squadron Eight in Norfolk, Virginia.

When he arrived at East Field in Norfolk, he was told to report to the squadron's commanding officer. Lieutenant Commander John Waldron had just returned from a training flight, and was still wearing his flight suit. He kept Morgan standing at attention in his office while he quickly signed a batch of papers. Looking down at Waldron as he worked, Smiley thought he looked old enough to be his father, and then some.

"Ensign," said Waldron without looking up, "I am going to give you your first duty in this squadron. Go over to the blackboard and print your name."

Standing up, Waldron repeated it aloud and came over to shake his hand. His fierce-looking face looked gaunt. The imprint of flying goggles was etched on his cheeks.

There was a lot for him to learn about flying a torpedo plane, he said, and he would have to work hard to master it all. They started every morning before dawn, and worked until well after dark.

"Welcome to the outfit," he concluded.

That was one of the few times Smiley ever talked to the Skipper alone. Nine days later, the Japanese attacked Pearl Harbor. From then on, Waldron ran the squadron like there was no tomorrow, seven days a week without letup. Smiley had never worked harder in his life. As the months passed, he began to feel a deep sense of pride at having mastered flying in every kind of weather and at all hours of the day and night.

Now he was on his way to war.

There had been little for the pilots to do aboard the Chaumont as it crossed the Pacific. During the day, they sunbathed on deck, ate their meals in the wardroom, exercised, studied torpedo attack problems, and read the dog-eared books and old magazines in the small wardroom library.

After dark, the ship was always blacked out in case a Japanese submarine lurked in their path. Morgan spent most of the night hours on the fantail with his friend Ensign John Taurman, a big, easygoing pilot from Cincinnati, Ohio. The two of them would sit against a stanchion, gazing backward as the ship's wake cut a crystal path behind them in the roiling sea, wondering what would await them when they finally arrived at Pearl Harbor.

Torpedo Squadron Eight had been temporarily split in half back in Norfolk. In early March 1942, Lieutenant Commander Waldron and most of the senior pilots had gone to sea aboard the carrier Hornet, sailing for the West Coast via the Panama Canal, after which the carrier headed out to the Pacific to engage the Japanese. Waldron's squadron was equipped with the Navy's outmoded torpedo plane, the Douglas TBD Devastator.

The second half of the squadron had stayed behind in Norfolk to receive delivery of the Navy's brand-new torpedo attack plane, the Grumman TBF Avenger. After the new planes had been flight-tested, Smiley and the rest of the pilots had flown them across the United States. In San Francisco, the crews and their aircraft had been put aboard fast transport ships. Their goal was to catch up to the Hornet before the next big battle against the Japanese.

The sea was almost flat calm as the Chaumont finally turned for the final leg of the passage between Molokai and Oahu, the islands lush and inviting beneath green mountains under the midday sun.

All of the pilots crowded the deck railing to get their first look at Pearl Harbor. Like the others, the twenty-four-year-old Morgan had seen the newspaper and magazine photographs of the devastation caused by the Japanese attack less than six months earlier. He thought he was prepared for what they would see. He was wrong.

After passing through the submarine nets protecting the entrance to the harbor, the Chaumont steamed slowly past Battleship Row. Lying upside down at one mooring, the capsized Oklahoma was dull brown in the sunlight. More than two football fields long, its rust-covered hull rose above the oily surface like a humpback whale. Next in line lay the battleship West Virginia, which had sunk at its mooring after taking six torpedoes and two armor-piercing bombs.

Farther down the anchorage, a small utility vessel was tethered next to the shattered wreck of the Arizona, its work party of salvage divers trying to start a gas engine suction pump.

What remained of the Arizona's superstructure above the water-line was nothing more than a rusting mass of battered metal. The officers' boisterous shouting suddenly ceased, and they sailed slowly past it in awestruck silence. If there was any lingering doubt about what they were fighting for, it ended there.

This excerpt from Robert Mrazek's book, A Dawn Like Thunder, is used with the permission of Hachette Book Group. All rights reserved.

Remembering the Battle of Midway June 4, 2007