Accessibility links
Economy Got You Down? Many Blame Rating Firms Credit ratings agencies are supposed to let investors know which bonds are relatively safe and which are particularly risky. They ended up giving their highest grades to the same bonds we now consider toxic assets. 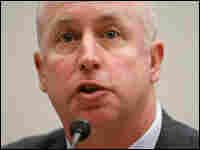 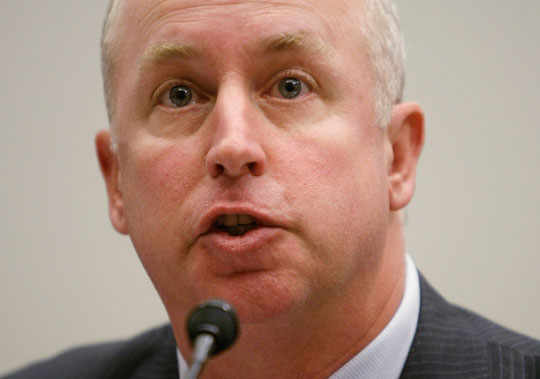 On Oct. 22, 2008, Raymond McDaniel, the chairman and CEO of Moody's, faced questions from the U.S. House Oversight and Government Reform Committee. 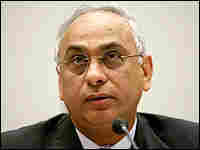 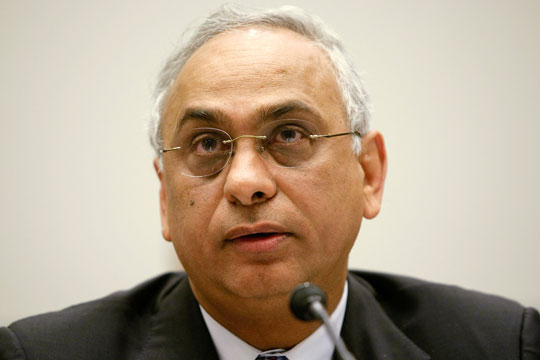 Doodles On A Catastrophe

When collateralized debt obligations explode, they look like this.

If you're looking for someone to blame in the collapse of the global economy, one popular punching bag is the credit ratings agencies. Firms like Moody's, Fitch and Standard and Poor's are supposed to let investors know whether bonds are particularly risky or relatively safe.

Ratings agencies gave their triple-A rating, the highest ranking, to many bonds backed by home mortgages — the same bonds we now call toxic assets. Grouping those bonds among the safest investments allowed trillions of dollars to flow into the housing market, which in turn created the housing bubble.

It's hard to overstate the ratings agencies' role in the worldwide financial system. They've been around for a century, assigning a letter grade to everything from railroads to school districts, even entire countries. Standard and Poor's gives Argentina a B-, for instance. That grade is supposed to answer investors' most basic question: If I loan someone money, will I get it back?

Answering that question got a lot more challenging in the 1990s, with the rise of new and more complicated bonds like mortgage-backed securities. To handle these, the rating agencies had to learn a new trick — math.

"We hired a specialist firm that used a methodology called maximum entropy to generate this equation," says Frank Raiter, who until 2005 was in charge of rating mortgages at Standard and Poors. "It looked like a lot of Greek letters."

The new bonds were based on pools of thousands of mortgages. If you bought one of these bonds, you were basically loaning money to people for their houses. What the equation tried to predict was how likely the homeowners were to keep making payments.

The system made sense, Raiter says, until loan issuers started offering mortgages to people who didn't have great credit and in some cases didn't have a job.

Raiter says there wasn't a lot of data on these new homebuyers. He says he told his bosses they needed better data and a better model for assessing the riskiness of the loans.

He remembers them telling him, "You've got 94 percent market share. You're not going to get any more if you build a new model." He adds, "To them it was just a tool. And we were making a lot of money with it. So why change it?"

Standard and Poor's says it did update its computer models during the housing boom.

Jim Finkel also wondered about those computer models and the ratings they helped produce. He works for a company called Dynamic Credit and helped put together complex bonds called collateralized debt obligations, which were made up of mortgages. Finkel profited from the AAA ratings, but he says the ratings agencies' blessings seemed too good to be true.

"They should have just said, 'You know what? We just don't have enough information about this stuff to ascribe a rating to it,' " he says. "There were ratings that we saw that made no sense to us.. We marveled at the ratings that all of these CDO products got."

For a bond to get a AAA rating, it is supposed to have passed a particularly strong test. The rating agencies would simulate a worst-case scenario and see how the bond held up.

But those scenarios were sometimes perplexing to outsiders. Mabel Yu analyzed bonds for Vanguard, which manages $400 billion in bond investments. The new deals would land on her desk, with their AAA ratings. She says she could never get a straight answer about what the worst-case scenario really was.

"I got names of the rating agency analysts, and I asked them lots of questions," she says. "In the beginning, the questions would be 15 minutes to half an hour. But then it turned into hours, and many hours." She asked them about the possibility of house prices falling, of interest rates rising, of people not being able to refinance their mortgages. "If all of those things happen at same time, what would happen to our investment? I could not get a straight answer."

Yu says she was told repeatedly that she worried too much. "I felt so dumb," she says, adding that she was told, "Don't worry about it. Have a life."

Of the two biggest ratings agencies, Moody's and Standard and Poor's, only the latter agreed to an interview for this story.

Managing director Tom Warrack was in the room when Standard and Poor's gave those mortgage-backed securities AAA ratings. He stands by that decision.

"I wouldn't say anything was missed," he says. "Never before in the history of the country, dating back to the Great Depression, have we had the type of nationwide market value declines, declines in home prices, and the associated default levels."

Warrack says that his agency required riskier loans to have more protections built in to receive the highest grade. He says the agency knew plenty about the mortgages inside those bonds. "We had lots of data," he says. "We had years' worth of data as to how borrowers perform over time."

Even in cases in which the homeowners didn't have to prove they had jobs, he says, the system gave the ratings agencies enough information to work with.

"Through our analytical process we're able to develop assumptions around what we believe the future will be like for these particular borrowers," he says.

Standard and Poor's says investors also have to make their own decisions. After Mabel Yu at Vanguard raised her concerns, Vanguard stopped buying those mortgage-related bonds.

This story was produced in collaboration with Chicago Public Radio's This American Life, which is distributed by Public Radio International. The show presents a special edition on the economy this weekend, with a look at the people and institutions charged with overseeing the financial system.