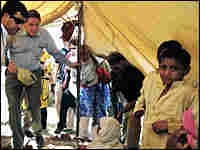 Richard Holbrooke, U.S. special envoy for Afghanistan and Pakistan, enters a tent to meet a displaced Pakistani family in Sheikh Shahzad refugee camp near Mardan, Pakistan, on Thursday. About 2.5 million people have flooded into the camps since the Pakistani army began an offensive in the Swat Valley to crush the Taliban militants there. Farooq Naeem/AFP/Getty Images hide caption 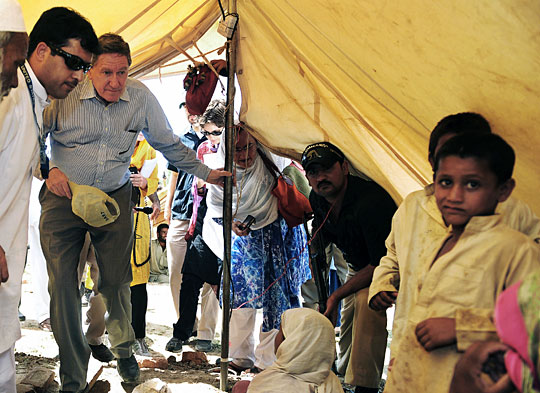 Richard Holbrooke, U.S. special envoy for Afghanistan and Pakistan, enters a tent to meet a displaced Pakistani family in Sheikh Shahzad refugee camp near Mardan, Pakistan, on Thursday. About 2.5 million people have flooded into the camps since the Pakistani army began an offensive in the Swat Valley to crush the Taliban militants there. 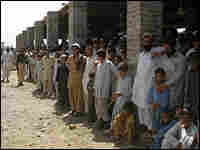 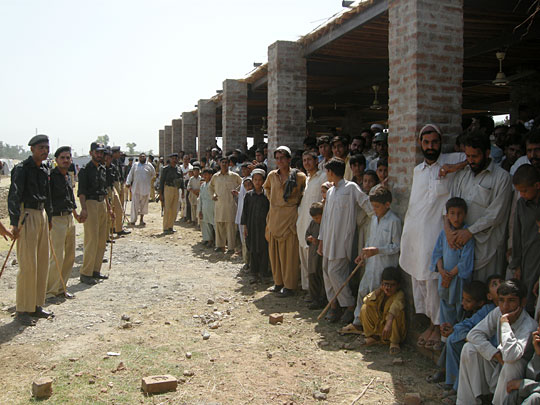 Residents of the camp gather during Holbrooke's visit.

As President Obama worked to repair relations with the Muslim world Thursday in Egypt, his special envoy, Richard Holbrooke, was delivering a goodwill message to Pakistan.

Holbrooke toured refugee camps brimming with people displaced by the Pakistani army offensive under way in the Swat Valley to crush the Taliban militants there.

But the mission wasn't the usual choreographed diplomatic affair.

Holbrooke literally blew into the Sheikh Shahzad refugee camp, some 75 miles south of Swat Valley near the town of Mardan, on a storm of dust and debris whipped up by the choppers of his entourage descending onto four helipads. The local commissioner for the area greeted the ambassador, recommending that he freely wander the camp if he wanted to know "the pulse" of the place.

Holbrooke joked, "Well, that's the best briefing I've ever had."

The U.S. envoy asked the camp dwellers — farmers, jewelers, day laborers — about their individual stories. And he seemed most interested to know what they knew of the Taliban.

"Are the Taliban people you know from your hometown, or are they from somewhere else?" he asked Mohammad Khan, who is from Mingora, the main city of Swat Valley.

Khan said only, "They were from the area" — apparently reluctant to speak publicly about the militants who had terrorized the local population. The displaced in the camp still are not convinced the extremists won't stage a comeback.

"We're not angry with the army over the operation against the militants. We're fed up with the fighting," she said.

As Holbrooke listened, his eyes settled on the latest addition to Begum's family, a 6-month-old baby girl.

The veteran diplomat was in turns the charming listener and no-nonsense messenger looking to set a few things straight, as when Begum implored the U.S. envoy to "bring us peace."

"We want peace, too, but the security must come from your own army, not from the Americans and other countries," Holbrooke replied.

The pall of misery is plain to see in the camps, but residents were keen to give Holbrooke unvarnished details. Abdul Sadiq, a farmer from the district of Buner, just south of Swat, told Holbrooke how dissatisfied he was.

"We're getting cooked food, but it's not good food. We have no bedding. My crops have withered in the field. Now we need help. Give us something," he pleaded.

In fact, the U.S. has pledged more than $300 million to help the refugees, half of all the international aid Pakistan has received.

But a high-level U.S. official is looked upon as deliverance in camps where many feel abandoned by their own government and believe that the war on terrorism is an American war. That perception is part of the disconnect that exists between the Americans and Pakistanis about how Pakistan reached this point.

But Holbrooke said there should be no mistake about why 2.5 million people were driven from their homes in the area.

Holbrooke moved from tent to tent, stooping inside the crowded, saunalike living quarters, mopping his brow with a baseball cap.

The patience he extended to the refugees differed from that given to the Pakistani journalists, who heckled Holbrooke in the middle of an interview he was conducting on the rutted grounds of the camp.

A shouting match broke out between the envoy and local journalists who felt they had been given short shrift.

But there was no shortage of camp residents curious to meet Washington's point man for the region. While a jittery security detail worked to keep them at bay, plenty got their chance in the controlled chaos.