Accessibility links
The Impossibility of the Perfect Photograph Independent producer Jake Warga has always dreamed of taking the perfect photo. He tells this story from his recent trip to Ethiopia, where he tried — in vain — to duplicate a shot he saw in National Geographic Magazine.

Listen
The Impossibility of the Perfect Photograph

Independent producer Jake Warga has always dreamed of taking the perfect photo. He tells this story from his recent trip to Ethiopia, where he tried — in vain — to duplicate a shot he saw in National Geographic Magazine.

Photographers are passionate about getting that perfect shot. They are aided or hindered, some would say, by new cameras and sharper lenses. But in the end, as independent producer Jake Warga has learned, the perfect photo requires something else.

JAKE WARGA: Years ago, I stole a National Geographic from my dentist's office. It had an article about the Kingdom of Axum in modern day Ethiopia. I took it for the photos, of course. Beautiful stone churches carved out of ancient rock like the photographer traveled not just in space but time.

There's a two-page spread of the stone church in Lalibela that, according to the caption, was sculpted over 800 years ago. I've been taking pictures for a while, but I decided that if I was ever to become a professional photographer, I had to take the same photograph. I brought the article with me to Lalibela, Ethiopia.

WARGA: It's Lent and everyone's squeezed inside stone churches to pray. Priests read by candlelight and oil lanterns flicker on the walls. There's no way of telling what century I'm in. It's like walking through an ancient illustrated Bible. At first, the incense is overpowering, then, calming. I breathe deeply. Everyone is wearing white robes like ghosts floating through deep passageways of stone, kissing walls and murmuring prayers.

Mr. WARGA: This is my guide, Mucha. He's also a deacon.

MUCHA: Every Sunday morning, at 10, there is a special ceremony in Orthodox Church then this is the rising of the Christ.

Mr. WARGA: As a photographer, I'm thinking that the white clothing will be a nice contrast with the dark volcanic stone they've come to pray towards.

Mr. WARGA: Every morning in Lalibela, I wake up before sunrise, walk to the same church that's in the article. And with my camera, I wait. I've learned that to get a good shot, you can't chase it. It has to come to you. So many times, I wandered around frustrated and lost in a foreign country. And it's when I sit down, out of exhaustion, I see it - the perfect angle, the perfect shot. The struggles of an entire day are worth it for that 1/60th of a second, as the shutter opens and closes, all in a blink of an eye. It's a beautiful feeling. But I'm here to get the same photo that's in the National Geographic. Mucha shows up with the sunrise.

MUCHA: And it's wonderful church in the town, which is called Bet Giorgis. Bet means house. Giorgis means one saint.

Mr. WARGA: I hand the article to Mucha. I noticed the photographer's name is also George.

Okay. So, as I explain, this is from the National Geographic.

Mr. WARGA: Now, if I took this photo, where would I have to be?

MUCHA: Before, before there was one bigger olive tree around here.

Mr. WARGA: So you think he was in a tree?

MUCHA: Maybe. You can get more than this picture - that photo.

Mr. WARGA: I want to try and get this one exactly.

Mr. WARGA: So to figure out where he was.

MUCHA: Well, I think he was here.

Mr. WARGA: You can't even see the church from this tree.

Mr. WARGA: So why are you climbing it?

MUCHA: I want to see it again.

Mr. WARGA: Okay. Go ahead. You're climbing the wrong tree.

Mr. WARGA: If the tree is in the shot, it's not that tree.

MUCHA: Okay, we just hiked through a cemetery.

We climbed up a hill all the way into someone's yard. And the woman is demanding money. I'm too busy trying to move a donkey. I'm starting to lose it.

I think it was a helicopter.

MUCHA: Maybe it's a helicopter.

Mr. WARGA: Yeah. I think it was a - can you get me a helicopter?

Mr. WARGA: Okay. So maybe if we got a bunch of these donkeys - it smells great. Right. We're surrounded by donkeys. Maybe we can tie them together and they can -

Mr. WARGA: I was hoping this would be the pinnacle, the height, literally, of my photography career. I'm going to take this photo in 55 millimeter and here we go.

Mr. WARGA: Let me just get another one.

Mr. WARGA: I look at the picture. It's not it. This is the one shot I needed in order to be like a professional.

Before sunset, I shoot for about an hour, near the base of the church, working with a priest in colored robes and amulets, walking him in and out of the entrance to get the best light. I don't check the images until I come out.

I just realized I took all these photographs at the wrong image. I put them all as JPEGs. I can't shoot JPEGs.

After all that, I had done the professional equivalent of shooting with my lens cap on - shooting compressed images that my photo agent won't accept.

The sun is setting. My guide has left me. I am now all alone, atop St. Georgis. The sun's gone behind a cloud, so I don't have the dramatic angles that I wanted. While I was squatting, stewing in my own stupidity...

Do you want a photograph?

Mr. WARGA: A group of Ethiopians came by, wanting to have their picture taken, implied by one guy, pointing to his camera.

So you want the church and the...?

I'm sure I can manage to work his little instamatic film camera, but there's some confusion as I get up and try to take it from him. It becomes clear in the universal tourist language of grinning and pointing that he doesn't want me to take his picture.

Unidentified Man: No. No. With you.

Mr. WARGA: He wants a picture taken with me.

Unidentified Man: Ah, together with you.

Mr. WARGA: Oh, okay. Why do you want a photograph with me?

Unidentified Man: Yeah. I have no reason.

My watchful guide appears, and I invite him to join the photo. Mucha is having a ball.

MUCHA: Ethiopians sometimes take one picture with you because we white people.

Mr. WARGA: I gave someone my huge digital SLR to take a group photo. He handles it awkwardly but in no time, he looks like a pro when his entire face is eclipsed behind it. God, I think, do I look like that when I take people's pictures? No wonder I don't get many smiles.

MUCHA: Really, this picture, it will be good.

Mr. WARGA: Eventually, the group leaves, but so has the sun. It's too dark to shoot now, so I pack my camera away.

Mr. WARGA: Mucha, seeing me starts to put away my recorder, asks if he can sing a song. I gave him the microphone.

Mr. WARGA: Though I don't understand a word, I finally see the most beautiful picture yet, a deacon, sitting on a rock face, where pilgrims carved the church over 800 years ago, singing with the same pious love that shaped the stone. The sun, recently gone down behind a red African haze.

Mr. WARGA: The photograph just can't capture this moment. So instead, I close my eyes and take a mental picture - the most beautiful image I've ever taken.

SIEGEL: Independent producer Jake Warga is also a photographer. He's based in Seattle. His work comes to us by way of Hearingvoices.com. And you can see a slideshow of Jake's images frOm Ethiopia at our Web site, npr.org.

Looking for the Ark, and Finding Humanity

Looking for the Ark, and Finding Humanity 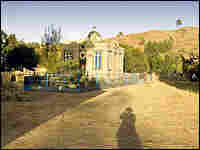 The Ark of the Covenant is said to rest in St. Mary Church of Zion in Axum, Ethiopia. Only a single monk is allowed to see the ark. hide caption 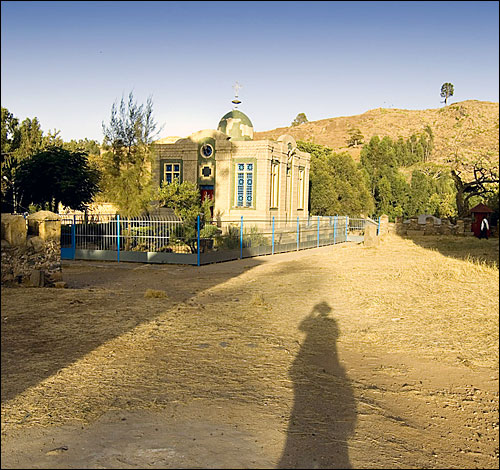 The Ark of the Covenant is said to rest in St. Mary Church of Zion in Axum, Ethiopia. Only a single monk is allowed to see the ark. 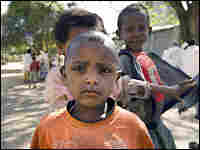 One of the orphans inside the St. Mary's compound. Jake Warga hide caption 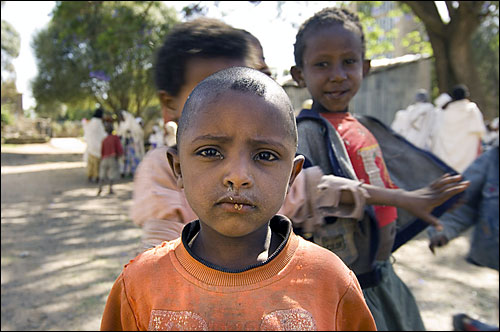 One of the orphans inside the St. Mary's compound.

Steven Spielberg plans to begin filming the fourth installment of the Indiana Jones series this spring with Harrison Ford and Sean Connery. The first film, Raiders of the Lost Ark, came out in 1981, and it left a deep impression on independent producer Jake Warga.

While on a trip to Ethiopia, Warga dons his fedora, just like Indiana Jones, and goes in search of the lost Ark of the Covenant.

He discovers a few things along the way: that the ark's final resting spot isn't deep in a government warehouse, but in a church in a dusty Ethiopian city on the border with Eritrea, and that life isn't always as it is in films.