Accessibility links
Is 1994 Act Enough To Protect Abortion Providers? The recent murder of abortion provider Dr. George Tiller is raising fears of a resurgence of clinic violence. It also has reignited debate over how best to prevent it. It's been 15 years since Congress passed the Freedom of Access to Clinic Entrances (FACE) Act, which was designed to quell anti-abortion violence. 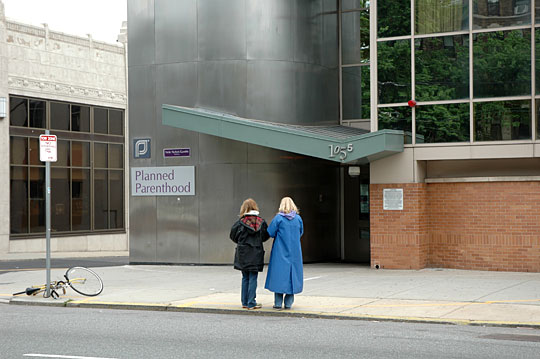 Anti-abortion activists Janet Noonan and Mari Liosa stay outside the yellow line that marks the 35-foot buffer zone around a Boston-area clinic that performs abortions.

The recent murder of abortion provider Dr. George Tiller is raising fears of a resurgence of clinic violence. It's also reigniting debate over how best to prevent it.

It has been 15 years since Congress passed the Freedom of Access to Clinic Entrances (FACE) Act that was designed to quell anti-abortion violence.

The law made relatively petty crimes like trespassing or vandalism into federal offenses if the crimes targeted abortion doctors or clinics. Using force to block abortion services became a felony punishable by up to 10 years in prison. But the deterrent effect was not immediately apparent.

Months after the law was signed, a doctor and his volunteer escort were killed outside a Florida clinic. Months after that, two clinic workers were killed just outside Boston. And there was a flurry of arsons, bombings and attempted homicides.

"There has been a reign of terror," says Vicki Saporta of the National Abortion Federation, an association of clinics that tracks anti-abortion violence. But after two killings in 1988, Saporta says, there was an encouraging lull for 10 years.

"We were hoping that we had turned a corner," Saporta says. "But with the murder of Dr. Tiller, it's clear that that hasn't occurred. In some ways, we've just been lucky."

Saporta says the FACE Act may have slowed extremism for a while, but it has failed to stop it because it doesn't crack down on the lower-level threats like stalking and harassment that often lead up to serious violence. For example, the man accused of killing Tiller had allegedly vandalized clinics several times without being charged.

"It's been a constant threat, constant picketing, contant disruption. Why are we permitting this?" says Eleanor Smeal of the Feminist Majority Fund. "[We should not allow] a person to be hounded this way. There has to be tough laws to discourage this uncivilized behavior that leads to assassination."

Smeal is also calling for strict federal standards on buffer zones. Right now, only about one-third of U.S. clinics have areas off-limits to protesters.

In Massachusetts, the buffer zone is 35 feet. Anti-abortion activists carefully skirt a bright-yellow circle painted on the sidewalk as they call out to women entering a clinic. The old tactics of blockading clinic doors are a thing of the past.

"We never cross that line," says Janet Noonan, a regular at a clinic just outside Boston.

"We could get arrested if we go past the line," says fellow demonstrator Mari Liosa.

"When the new lines were drawn, I was not going to come back to the clinic, because I said I can't stand here like a lunatic, screaming at the top of [my] lungs," Noonan says.

But she says she changed her mind when she saw that she could still be effective in persuading women not to have abortions, even from outside the buffer zone.

With her toe on the yellow line, she calls out to passing women.

"Please, sweetheart, you're shaking like a leaf," she says to one. "Just have the child, sweetheart. You're going to love this baby so much."

Eventually, the woman stops and engages in a conversation. "I really can't afford it," she says.

"But we can help you with anything," Noonan offers. "I told you, if it's money, we will help you. We will provide a place."

"You know how expensive it is?" the woman interjects. "I have two boys at home."

"What if this is a little girl?" counters Noonan. "She will be the joy of your life!"

Finally, in tears, the woman says she will discuss her options with the counselors inside, and she enters the clinic. Noonan and Liosa say goodbye and say a prayer.

Noonan dismisses suggestions that what she is doing is harrassing.

"I leave them alone if they ask me to," she says. And she says she would never even consider using force.

She calls Tiller's murder "deranged" and "evil." People who see the killing as justifiable homicide, she says, will never be stopped by the FACE Act, or any other law.

The Rev. Donald Spitz, with the extremist anti-abortion group "Army of God," says the shooting of Tiller is no different from shooting down a madman who opens fire on a group of preschoolers.

"I understand that perfectly, why someone would take some action doing that," he says.

Rather than quelling clinic violence, he says, the FACE Act is stoking frustration among some abortion opponents, pushing them to even greater extremes.

"I understand that anger," he says. "You know children are dying, and you want to do something. And just, you know, people just can't take it anymore. That might just drive them to it. So I think the pro-abortion people brought this on themselves by forcing the politicians to pass these laws."

Spitz has called those who kill abortion providers heroes, and he says he sheds no tears for Tiller.

"He was the murderer, and as far as I'm concerned, he reaped what he sowed," he says.

But abortion rights advocates say that kind of rhetoric sows the seeds for more violence. And they say the FACE Act needs to be expanded and used to crack down on such inflammatory rhetoric.

"The whole atmosphere is giving license to extreme behavior," Smeal says. "We cannot be fooled that these are lone gun people — that this [violence] is just happening in a vacuum. It is not."

It is, of course, much trickier territory to define when fiery, hateful or inflammatory rhetoric becomes aiding and abetting a crime. As some abortion opponents see it, even the most extreme rhetoric is no excuse for such an extreme crackdown on free speech.