Accessibility links
Eels: Finding Danger With 'Hombre Lobo' Mark Oliver Everett is the creative force behind the rock band Eels. Since the group's debut album in 1996, Everett has made moody rock music with rough edges and tuneful melodies. That tradition continues on Hombre Lobo: 12 Songs of Desire, the band's first album in four years.

That Look You Give That Guy 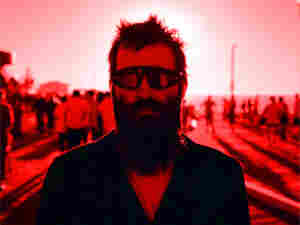 His fans call him "Mr. E," "A Man Called E" or sometimes just "E." Whatever you call him, Mark Oliver Everett is the creative force behind the rock band Eels. Since Eels' debut album in 1996, Everett has made moody rock music with rough edges and tuneful melodies. That tradition continues on Hombre Lobo: 12 Songs of Desire, the band's first album in four years.

The record cover depicts Everett with a long, ZZ Top-style beard. The title, Hombre Lobo, translates to "wolfman." Everett says his beard inspired the mood of the new songs.

"I was working on some other music," Everett says, "and I looked in the mirror one morning and I saw this werewolf staring back at me. And I thought, 'You know, this beard doesn't really suit the music I'm working on currently. I should cut it off.' And then, at the last minute, it occurred to me, 'Well, why don't I just make some music that suits the beard, and I'll keep it.' "

In many ways, he says, the album marks a tonal shift away from the intimate songs of 2004's Blinking Lights and Other Revelations, and instead reflects the mood of the song "Dog Faced Boy," from Eels' 2001 album Souljacker. The music on Hombre Lobo is full of emotional longing and delicate sentiments, but also a more primal element — something Everett says is missing from much of indie rock.

"It occurred to me that something that seems to be kind of lacking in so-called indie rock these days is an element of sex and danger," Everett says. "And I just thought, 'Isn't that where the term rock 'n' roll came from?' Let's howl after some girls now and then.

"I look at the songs as kind of sales pitches from this character who's trying to convince the object of his desire that he's the man," he adds. "And he takes different approaches, like he kind of loses his cool and lets his passions take over. And other times, he takes a more tender approach."

Even though four years passed between Eels records, Everett says he kept busy by writing a book and filming a documentary about his father — physics pioneer Hugh Everett — called Parallel Worlds, Parallel Lives.

To hear the entire interview with Mark Oliver Everett, including more about his documentary, click on the "Listen" link at the top of the page.