Accessibility links
Naturally 7: Where Voices Become Instruments Of Soul Members of the a cappella septet Naturally 7 use their voices to mimic the sounds of musical instruments. The group has entertained Prince Charles and Quincy Jones and has toured with Canadian singer Michael Buble. 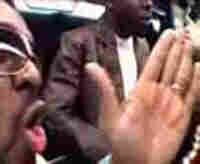 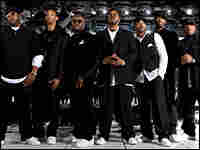 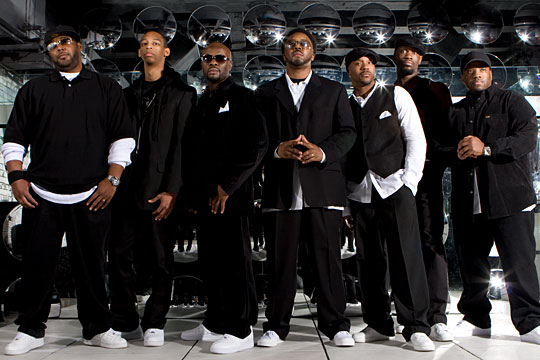 Many people know about Naturally 7, an acclaimed a cappella septet, from watching a YouTube video in which the musicians perform in the Paris Metro during rush hour. The group has toured with Michael Buble and performed for Prince Charles and Quincy Jones. Naturally 7 recently visited NPR's Studio 4A for a performance and interview with Scott Simon.

The group's members — who have trained their voices to mimic various instruments, including bass guitar, drums, harmonica, flute and baritone horn — met in New York City. Brothers Roger and Warren Thomas founded the group, while the remaining members found their way to each other gradually.

At first, the band performed standard a cappella fare. Later, its members discovered that each had a talent for mimicking instruments. Their approach to music is original, but not without method.

"I like to visualize that I have a drum set," Warren Thomas says. "We try to see it to be it."

One night, while asleep in its tour bus, the band was awakened by cries of "Fire!" With only the clothes on their backs, they evacuated the bus, which was engulfed in flames only moments later.

"Fortunately, none of our instruments were destroyed in the fire," says Armand "Hops" Hutton, the group's bass.

The musicians are quick to point out their career highlights. They performed at the 75th birthday of Quincy Jones, sharing the stage with musical legends that would "make your jaw drop," says Rod Eldridge, the group's tenor.

After Naturally 7 performed, the audience gave a standing ovation, and Jones went onstage to shake their hands. Eldridge describes the experience as "an amazing honor" and "a moment that we will never forget."

The members of Naturally 7 say they never anticipated experiencing the level of success they enjoy today.

"Sometimes it can make you need to sit down for a moment, when you think of how blessed we've been," Eldridge says.