Accessibility links
Sex Without Intimacy: No Dating, No Relationships Hooking up is becoming a trend, not only among college students, but increasingly among 20-somethings who have entered the work world. As many delay marriage, they are trading dating for hookups — casual sexual encounters with no strings attached. 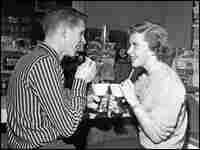 Dating is an evolution of the courtship ritual; it became common for young couples — like this pair at a soda fountain in the 1960s — to go out for a movie or a meal as part of a courtship. H. Armstrong Roberts/Retrofile/Getty Images hide caption 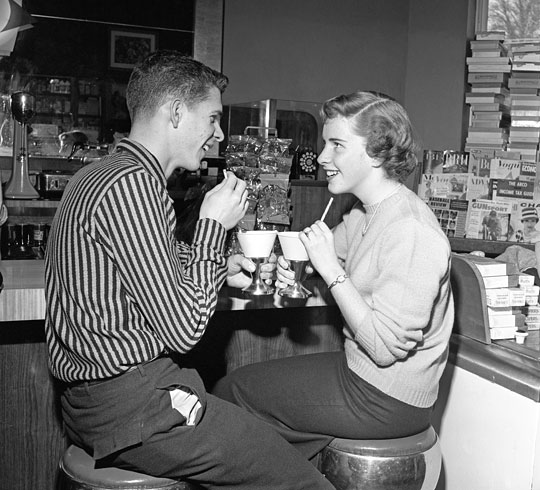 Dating is an evolution of the courtship ritual; it became common for young couples — like this pair at a soda fountain in the 1960s — to go out for a movie or a meal as part of a courtship.

Graph: Marrying Ages In The United States Are On The Rise
Alyson Hurt/NPR

In general, in the Northeast the median age for marriage for men and women was higher than the national average.

Note: Ages represent the average between 2000 and 2003 of the estimated median age at first marriage.

See the full table from the U.S. Census Bureau. 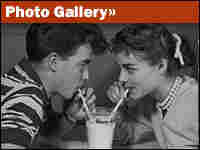 See How Dating Has Evolved Over The Years

Do you think hooking up is liberating, degrading or no big deal? Take our poll. 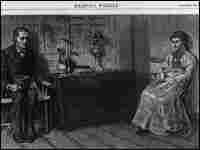 Before dating evolved, a man would call upon a woman in her home, as shown in this 1882 engraving published in Harper's Weekly. Library of Congress hide caption 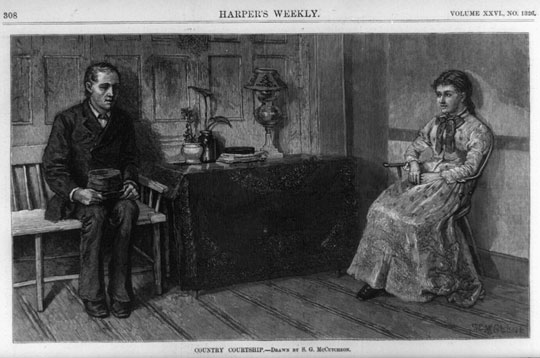 Before dating evolved, a man would call upon a woman in her home, as shown in this 1882 engraving published in Harper's Weekly.

The hookup — that meeting and mating ritual that started among high school and college students — is becoming a trend among young people who have entered the workaday world. For the many who are delaying the responsibilities of marriage and child-rearing, hooking up has virtually replaced dating.

It is a major shift in the culture over the past few decades, says Kathleen Bogle, a professor of sociology and criminal justice at La Salle University.

Young people during one of the most sexually active periods of their lives aren't necessarily looking for a mate. What used to be a mate-seeking ritual has shifted to hookups: sexual encounters with no strings attached.

Young people from high school on are so preoccupied with friends, getting an education and establishing themselves, they don't make time for relationships.

"Going out on a date is a sort of ironic, obsolete type of thing," says 25-year-old Elizabeth Welsh, who graduated from college in 2005 and now lives in Boston. She says that among her friends, dating is a joke. "Going out on a date to dinner and a movie? It's so cliche — isn't that funny?"

It seems it's far easier to have casual sexual encounters or hookups, though several national surveys of college students found a stalwart 28 percent who remain virgins. The term "hookup" is so vague, however, it might well encompass someone's idea of virginity — it involves anything from kissing to fooling around, oral sex and sexual intercourse.

"For me, it's been anytime that I was attracted to a guy and we spent the night together," Welsh says. "It has been sex; it has just been some sort of light making out. That's the beautiful thing about the phrase. Whatever happened is hooking up."

Bogle interviewed college students on a small and a large campus, as well as recent college graduates, to find out what was going on. The hooking-up phenomena has been traced back to the 1960s and the 1970s, when male and female students were thrown together in apartment-style dormitories, and there was a revolt against strict rules on having a member of the opposite sex in your dorm, lights out and curfews.

"What you see on college campuses now, even in some cases Catholic campuses, is that young men and women have unrestricted access to each other," Bogle says. Throw in the heavy drinking that occurs on most campuses, and there are no inhibitions to stand in the way of a hookup.

The alumni Bogle spoke with were less into hooking up after leaving college, but she says that's changing. It is catching on among young working adults, mainly because of the Internet and social networks.

The Evolution Of Dating

Dating itself represented a historical change. It evolved out of a courtship ritual where young women entertained gentleman callers, usually in the home, under the watchful eye of a chaperon. At the turn of the 20th century, dating caught on among the poor whose homes were not suitable for entertaining, according to Beth Bailey's history of dating, From Front Porch to Back Seat: Courtship in Twentieth-Century America.

Young couples would go out for a movie or dinner. The expectation was that dating, as with courtship, would ultimately lead to a relationship, the capstone of which was marriage. Precious few of these young women attended college.

Bogle says the hookup is what happens when high school seniors and college freshmen suddenly begin to realize they won't be marrying for five, 10 or 15 years.

Marriage is often the last thing on the minds of young people leaving college today.

"My first few years out of college was about trying to get on my feet and having a good time," Welsh says. Dating and a relationship interfered with that.

Avery Leake, 25, knows what this is like from the other side. He's in a relationship now, but he says that, in general, most of the young women he used to meet "just wanted sex. They're independent." Being in a relationship was not important to them, especially if it interfered with their careers or their pursuit of advanced degrees, he says.

Leake found that he was also up against women who had as much money as he had, if not more, and he says dating had just become too expensive. "You used to be able to get away with paying $30 for a dinner and a movie," Leake says. "Not anymore."

Empowerment Or Loss Of Intimacy?

A number of experts accept this relaxed attitude toward sex outside of relationships as a natural consequence of the sexual revolution, women's growing independence and the availability of modern contraceptives. But Deborah Roffman, who conducts human sexuality workshops for middle- and high-school-age students and their parents, sees that as a distorted view of liberation.

"It's not a new model. I think most people would probably look back and agree that this has been a more traditionally, or at least stereotypically, male model," says Roffman. "What I've seen over the last few years is girls adopting a more compartmentalized view, and feeling good and empowered by it."

She's not convinced that this is a good thing for women, and says that being able to say yes is only one way of looking at freedom. She would feel much better if young men also were developing a greater capacity for intimacy.

Being able to engage in intimate relationships where men and women bring all of themselves to the relationship is the cornerstone of family, Roffman says.

But young people like Elizabeth Welsh don't see the hookup as an obstacle to future relationships:

"It is a common and easy mistake," Welsh says, "to assume that the value of friendship and those relationship building blocks have no place in longer-term relationships."

If you're honest and open about what you're doing, and willing to commit to a relationship, she says, a hookup and friendship can be fused into a lifetime partnership.

At 25, May Wilkerson would like a relationship, but not a family — not quite yet. She's lived a lot of places: Argentina, Canada and Paris. Wilkerson says she hasn't found much intimacy with the men she's encountered.

In New York City, where she moved two years ago, people seem even more emotionally detached, and she thinks it is because so many of the people who come to the big city are focused on success.

"For many of us, the requisite vulnerability and exposure that comes from being really intimate with someone in a committed sense is kind of threatening."

And the thought of being in love with someone, Wilkerson says, "is the most terrifying thing."

Yes, she has been in love, but the guy wasn't quite into it. There was one older guy who was serious; he used to bring her cupcakes. She couldn't work up an interest in him.

Today, Wilkerson says people hook up via the Internet and text messaging.

"What that means is that you have contact with many, many more people, but each of those relationships takes up a little bit less of your life. That fragmentation of the social world creates a lot of loneliness."

Hooking up started before the Internet and social networks, but the technology is extending the lifestyle way beyond the campus. Deborah Roffman says no one is offering this generation guidance on how to manage what is essentially a new stage in life.

The dilemma for this generation is how to learn about intimacy, she says: "How am I going to have a series of relationships that are going to be healthy for me and others, and going to prepare me" for settling down with one person?

Wilkerson doesn't really focus on the concerns of people like Roffman, who fear that hooking up doesn't bode well for the future of young people. She thinks young people will be able to sort it out for themselves.

"We all attended health class in middle school and high school. We know about condoms and sexually transmitted disease. Sex is fun, and a lot of people would argue that it is a physical need. It's a healthy activity."