Accessibility links
AIDS Diarist Thembi Ngubane Dies Thembi Ngubane, who chronicled her experience of living with AIDS, died Thursday at the age of 24. Ngubane lived in a shack in the biggest township in South Africa, but over the past five years, her diary about living with HIV was heard around the world.

Thembi Ngubane died Thursday at the age of 24. She was 19 when she was given a tape recorder to make an audio diary of her struggle to live with AIDS. Melikhaya Mpumela hide caption 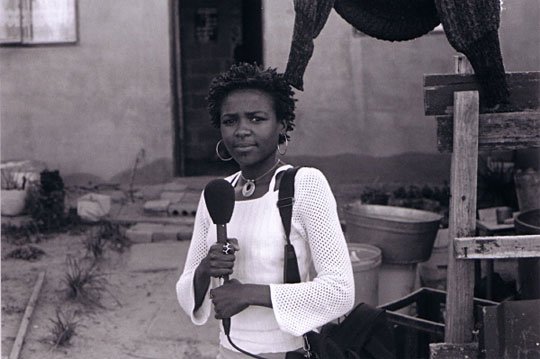 Thembi Ngubane died Thursday at the age of 24. She was 19 when she was given a tape recorder to make an audio diary of her struggle to live with AIDS.

Past NPR Interviews With Thembi Ngubane

When I first met Thembi Ngubane, she was 19. She was living in a shack and she was HIV-positive. I suppose the odds were stacked against her, but it didn't seem that way at the time.

Thembi thought the virus should be scared of her, rather than the other way around.

And one of the first things Thembi recorded for her radio diary — in which she chronicled for a year her experience of living with AIDS — was what she called her "HIV Prayer."

"Hello, HIV, you trespasser, you are in my body," she said. "You have to obey the rules.

"You have to respect me. And if you don't hurt me, I won't hurt you. You mind your business. I'll mind mine. And I will give you a ticket when the time comes."

Over the course of a year, Thembi recorded about 50 hours of tape: interviews with her family and friends; late-night dancing with her boyfriend, Melikhaya; the sounds of her baby, Onwabo; and the moment when she told her father that she had AIDS.

But the most amazing part of Thembi's story was what happened after her diary aired. Thembi traveled to the United States in 2006 to present her story at high schools and colleges. She met former President Bill Clinton and then-Sen. Barack Obama.

Yet what Thembi was most proud of was slowly finding the courage to speak out in her own country. At the time, very few people in South Africa were talking openly about their HIV status. In March 2007, she addressed the South African Parliament.

"Every time I went to the clinic, someone is dying because all these people have lack of knowledge; all these people don't believe AIDS exists," she said. "That's why people must stop discriminating because it's not going to go away. It's up to us to do something about us."

Thembi was under 5 feet tall, but she was a big presence: brave, open and funny, with a really charming smile. It was sometimes difficult to remember that she was sick.

This week, Thembi was diagnosed with drug-resistant TB. She died Thursday night. She was 24.