Accessibility links
Staying Cool With The Songs Of The Week NPR Music's Song of the Day features a new track every weekday, with analysis of the music, links to each artist's Web sites and, of course, a chance to hear the song itself. Here, Song of the Day editor Stephen Thompson talks about recent selections by Metric, Magnolia Electric Co., Booker T. Jones and Levon Helm.

Songs Of The Week

Wednesday: 'I Was Made To Love Her' by Theron And Darrell 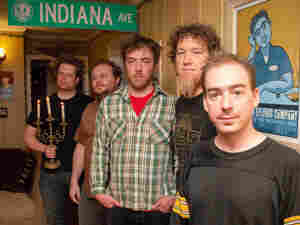 It's getting harder to stay cool, and not just in meteorological terms. Trends come and go, and finding the best music amid the din can be time-consuming.

One way to keep up is NPR Music's Song of the Day, which features a new track every weekday. Each piece offers analysis of the music, links to each artist's Web sites and, of course, a chance to hear the song itself. Host Jacki Lyden recently spoke to Song of the Day's editor, Stephen Thompson, about this past week's selections.

After Lyden requests a definition of "candy-coated insects" — a phrase Thompson applies to songs by Metric, whose members disguise bitter lyrics under catchy dance-pop — the two play and discuss Metric's "Sick Muse" and Magnolia Electric Co.'s "Whip-poor-will," as well as uplifting late-career highlights from two music legends in their 60s. After discussing an unlikely cover of OutKast's 2003 hit "Hey Ya" (by organ legend Booker T. Jones of Booker T & The MGs), Lyden and Thompson marvel over the resilient voice of The Band's Levon Helm, who covers Muddy Waters' "Stuff You Gotta Watch" on his forthcoming album Electric Dirt.