Accessibility links
Fordlandia: The Failure Of Ford's Jungle Utopia Henry Ford didn't just want to be a maker of cars — he wanted to be a maker of men. He thought he could perfect society by building model factories and pristine villages to go with them. And he was pretty successful at it in Michigan. But in the jungles of Brazil, he would ultimately be defeated. 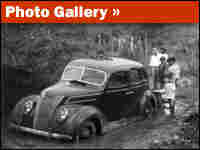 Henry Ford didn't just want to be a maker of cars — he wanted to be a maker of men. He thought he could perfect society by building model factories and pristine villages to go with them. And he was pretty successful at it in Michigan. But in the jungles of Brazil, he would ultimately be defeated.

It was 1927. Ford wanted his own supply of rubber — and he decided to get it by carving a plantation and a miniature Midwest factory town out of the Amazon jungle. It was called "Fordlandia."

Leonor Weeks DeCeco was 8 years old when she joined her father in Henry Ford's jungle utopia. "We had everything that we really wanted. We had a swimming pool, tennis court, golf course, and I had my animals — my Chico, which was a rare monkey."

"My dad was a construction engineer, and he was in charge of everything, and I enjoyed being down there with him," she says.

But for pretty much everyone else, it was a green hell of riot and blight. Author Greg Grandin tells the story in his new book, Fordlandia: The Rise and Fall of Henry Ford's Forgotten Jungle City.

The project didn't start out well, Grandin says. There was a huge clash of culture between mechanized America, Ford's utopian ideals and the way the indigenous people lived.

The first failure of Fordlandia was social. "The first years of the settlement were plagued by waste and violence and vice," Grandin says.

"There were knife fights, there were riots over food and attempts to impose Ford-style regimentation," Grandin says. "When people ask me what Fordlandia was like, I tell them to think more of Deadwood than Our Town."

Things went bad over simple stuff, like serving food. "Ford had very particular understandings about what a proper diet should be," Grandin says. "He tried to impose brown rice and whole-wheat bread and canned peaches and oatmeal — and that itself created discontent."

But when a Ford engineer changed the way food was served — from wait service to cafeteria-style service — the workers rebelled. Angry workers destroyed the mess hall, pushed trucks into the river and nearly ruined the whole operation. It cost tens of thousands of dollars of damage, Grandin says.

But Ford didn't just want to tame men; he wanted to tame the jungle itself — and therein was his next failure.

"Ford basically tried to impose mass industrial production on the diversity of the jungle," Grandin says. But the Amazon is one of the most complex ecological systems in the world — and didn't fit into Ford's plan. "Nowhere was this more obvious and more acute than when it came to rubber production," Grandin says.

Ford was so distrustful of experts that he never even consulted one about rubber trees. If he had, Grandin says, he would have learned that plantation rubber can't be grown in the Amazon. "The pests and the fungi and the blight that feed off of rubber are native to the Amazon. Basically, when you put trees close together in the Amazon, what you in effect do is create an incubator — but Ford insisted."

The resulting plantation actually accelerated the production of caterpillars, leaf blight and other organisms that prey on rubber, Grandin says.

Even when not worried about riots or leaf blight, the people running the plantation — brought down from Michigan — had a hard time in the rainforest.

"They succumbed to the heat, the oppressive humidity," Grandin says. "Wives who accompanied the men down to Fordlandia had less to do. Men, at least, were charged with trying to build the town, trying to build a plantation."

Fordlandia isn't just the story of a plantation; it's a story about Ford's ego. As disaster after disaster struck, Ford continued to pour money into the project. Not one drop of latex from Fordlandia ever made it into a Ford car.

But the more it failed, the more Ford justified the project in idealistic terms. "It increasingly was justified as a work of civilization, or as a sociological experiment," Grandin says. One newspaper article even reported that Ford's intent wasn't just to cultivate rubber, but to cultivate workers and human beings.

In the end, Ford's utopia failed. Fordlandia's residents, ever in hope their patriarch would someday visit their Midwestern industrial town in the middle of the jungle, gave up and left.

These days, Fordlandia is quite beautiful, Grandin says. The "American" town where the managers and administrators lived is abandoned and overgrown. Weeds grow over the American-style bungalows, and bats roost in the rafters, and little red fire hydrants sit covered in vines. 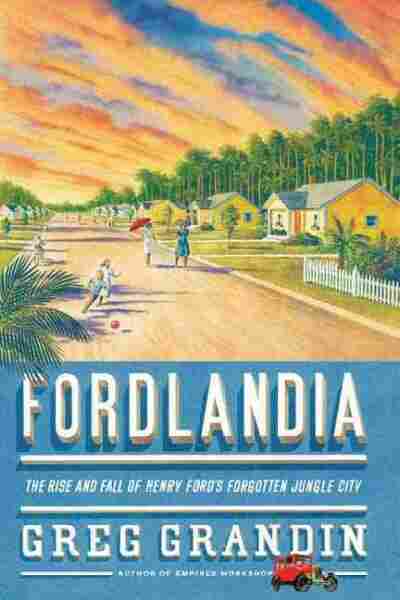 The Rise and Fall of Henry Ford's Forgotten Jungle City