Accessibility links
New Translations For Lovers Of Greek Poet Cavafy Constantine Cavafy may not be a household name, but the Greek poet was admired by English novelist E.M. Forster, and Jacqueline Kennedy loved his poetry so much that it was read at her funeral mass. Author and critic Daniel Mendelsohn speaks to host Jacki Lyden about his new translation of Cavafy's collected poems.

Constantine Cavafy may not be a household name, but the Greek poet was admired by English novelist E.M. Forster, and Jacqueline Kennedy loved his poetry so much that it was read at her funeral mass. Author and critic Daniel Mendelsohn speaks to host Jacki Lyden about his new translation of Cavafy's collected poems.

'As Much As You Can'

'Of The Sixth Or Seventh Century' (Unfinished Poem)

From NPR News, this is ALL THINGS CONSIDERED. I'm Jacki Lyden. During World War I, the English novelist, E.M. Forster, met a Greek poet named Constantine Petrou Cavafy. He later described CP Cavafy as a Greek gentleman in a straw hat standing absolutely motionless at a slight angle to the universe. Here's how the author and critic Daniel Mendelsohn describes Cavafy today.

LYDEN: Now, you spent 12 years researching and newly translating all of Cavafy's known poetic works, and they're published in a new volume of collected poems like "Waiting for the Barbarians" and "Ithaca," which was read at the funeral of Jackie Kennedy Onassis. Why did you want to do it? I know you've studied Greek since college, but still…

Mr. MENDELSOHN: Well, I had studied - you know, it was a (unintelligible) doing my graduate work in classics and also my undergraduate work, and so I knew ancient Greek. And actually, it's a funny story. I was in a summer-long program for classics students who wanted to see all the important sites in Greece, and I quickly realized that I did not have the archeological gene in me and was profoundly bored by waking up at 4 in the morning every day to go look at a Mycenaean tomb…

Mr. MENDELSOHN: …indistinguishable from the other Mycenaean tombs one had looked at the day before. And so, just to sort of keep from losing my mind, basically, on these long bus coach trips all across Greece, zigzagging all over the country, I stopped in a grocery store in the middle of nowhere. And to practice my Greek, I thought I'd just get a Greek book. And the only book they had was an old, battered copy of Cavafy. And I just started memorizing a poem a day, and that's how it started it.

LYDEN: Constantine Cavafy turns out to have been one of those poets who had a mundane day job, born as you said in Alexandria in 1863, one of seven sons of a merchant family. He spent 30 years at the public works office known as the Third Circle of Irrigation, a title I love.

Mr. MENDELSOHN: I always liked to say that Cavafy belongs to actually very interesting, you know, whole echelon of poets, great poets with boring day jobs. But his other life was not at all boring, particularly as a young man in the 1890s.

He was an obedient son who lived with his mother in a ramshackle apartment in Alexandria. And he would sort of have dinner with her and put her to bed, and then he would go out cruising, basically, the sort of loosh(ph) quarters of Alexandria. And there's one account that says that he actually kept a room in a male brothel, where he would go, and there was a servant in the house of his mother who would muss up his sheets to make it look like he had slept at home.

He's lost him utterly, as if he'd never been. In his imagination, in his hallucinations, in the lips of other youths, he seeks the lips of that one. He wishes that he might feel his love again.

LYDEN: Now, you write that he saw history with a lover's eye and desire with a historian's eye. What did you mean by that?

Mr. MENDELSOHN: The common approach to interpreting Cavafy for many, many years now is that he has two subjects: history, the Greek past from classical times to Byzantium, and then as if it were an entirely different subject, desire, as in the poem I've just read.

And I don't see it that way. And in my introduction, I make a case for thinking about Cavafy as a poet who was only interested really in one subject, which is time and the passage of time, and how it affects how you see the past, whether that past is a Byzantine emperor's failed attempts to restore the empire or one's own love affair with a beautiful boy in Alexandria in 1892. It doesn't matter to Cavafy. What he's interested in is a relation to what has already happened.

LYDEN: Can we look at a poem that I really like? This one is called "Nero's Deadline," and it shows a humor in Cavafy that I also was glad to see.

Mr. MENDELSOHN: And just to set up the poem a tiny bit, Nero was a problematic emperor, and he was finally the victim of a military coup. One of the leaders of the coup was a man named Galba. So, this is a poem called "Nero's Deadline."

(Reading) Nero wasn't worried when he heard the prophecy of the Delphic Oracle: Let him beware the age of 73. He still had time to enjoy himself. He is 30 years old. It's quite sufficient, this deadline that the god is giving him for him to think about dangers yet to come.

Now, to Rome he'll be returning, a little wearied but exquisitely wearied by this trip, which had been endless days of diversion in the theaters, in the gardens, the gymnasia, evenings of the cities of Achaia. Ah, the pleasure of naked bodies above all.

So Nero. And in Spain, Galba was secretly assembling his army and preparing it, the old man 73 years old.

It doesn't occur to him, of course, that the man who's going to kill him is 73 years old. And that kind of failure of vision is a very favorite Cavafian theme.

LYDEN: Critic and author Daniel Mendelsohn has retranslated and published the collected poems of CP Cavafy. He's also got another book translating the poet's unfinished work into English for the very first time. To hear some of that, go to our Web site, npr.org. 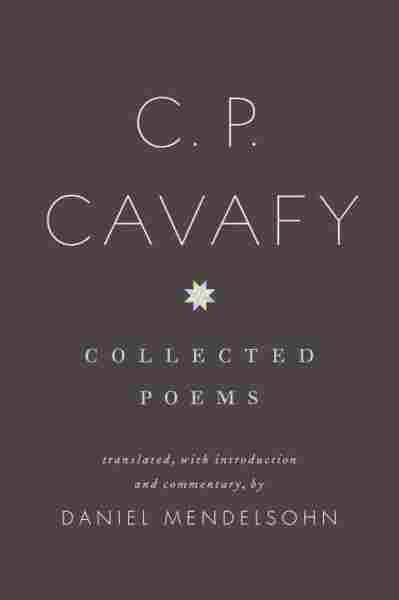