Accessibility links
'Frog And Toad' Leap Off The Page Again Adrianne Lobel was surprised to discover illustrated handmade pamphlets of poems that her father, Arnold, had given to friends as gifts. She decided to use her expertise as an artist to color her father's black and white illustrations and published them in a book. 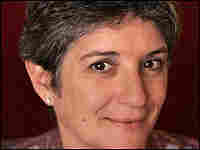 When Adrianne Lobel discovered some illustrated "Toad and Frog" poems her father had given to friends, she decided to publish them for others to enjoy. Ken Howard hide caption

When Adrianne Lobel discovered some illustrated "Toad and Frog" poems her father had given to friends, she decided to publish them for others to enjoy. 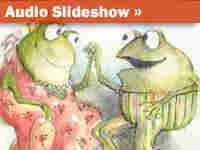 Hear A Snippet Of "A Year With Frog And Toad"

Adrianne Lobel uses brighter colors in her illustrations (see top picture). When her father, Arnold, was illustrating he could only use two colors because of color separation (see bottom picture). 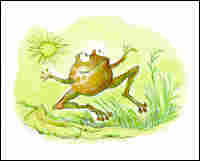 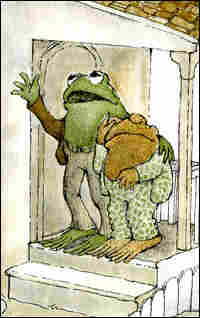 Enlarge this image
© 1970 by Arnold Lobel

If you're very young, your secret pleasure may come from two friends in children's books: Frog and Toad.

The two amphibian friends go sledding, look for spring, eat chocolate ice cream cones and are completely devoted to each other.

They're the creation of the late writer and illustrator Arnold Lobel, who led them through small adventures in four books during the 1970s.

Lobel died in 1987. But now, there's a new addition to the world of Frog and Toad, a collection of 10 rhyming stories called The Frogs and Toads All Sang.

These stories and pictures were drawn before the Frog and Toad books that were previously published. The stories were gifts written and drawn in black and white by Lobel and given to friends.

The newly published books have color added by his daughter, Adrianne Lobel. She tells NPR's Melissa Block that the manuscript turned up last year at an estate auction.

"In a box they found these three beautifully bound pamphlets that my father had handwritten and illustrated with little pencil, thumbnail sketches. These books were poems about frogs and toads," she says.

It was a big surprise to find them. Her father, she says, must have written them in the mid- or late 1960s in secret. Before she found them, she says, she had always credited herself as the person who instructed her father as to the difference between frogs and toads.

She says, in adding color to the black and white paintings in the manuscripts, she remembered something her father used to tell her: Don't be afraid to color out of the lines.

"So, of course, on these illustrations, I worked with a huge brush and with very brilliant Dr. Martin's dyes and a lot of water, and the sloppier I was, in a controlled way, the happier I was with the illustrations," she says. "I wanted each illustration to have even more form than the original drawings and a lot of light, and, I think, for the most part, I did succeed in doing that."