Excerpt: 'The School of Essential Ingredients'

Excerpt: 'The School of Essential Ingredients' 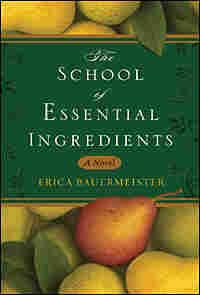 Lillian had been four years old when her father left them, and her mother, stunned, had slid into books like a seal into water. Lillian had watched her mother submerge and disappear, sensing instinctively even at her young age the impersonal nature of a choice made simply for survival, and adapting to the niche she would now inhabit, as a watcher from the shore of her mother's ocean.

In this new life, Lillian's mother's face became a series of book covers, held in place where eyes, nose, or mouth might normally appear. Lillian soon learned that book covers could forecast moods much like facial expressions, for Lillian's mother swam deeply into the books she read, until the personality of the protagonist surrounded her like a perfume applied by an indiscriminate hand. Lillian was never sure who would greet her at the breakfast table, no matter that the bathrobe, the hair, the feet were always the same. It was like having a magician for a mother, although Lillian always suspected that the magicians she saw at birthday parties went home and turned back into portly men with three children and grass that needed mowing. Lillian's mother simply finished one book and turned to the next.

Her mother's preoccupation with books was not an entirely silent occupation. Long before Lillian's father had left them, long before Lillian knew that words had a meaning beyond the music of their inflections, her mother had read aloud to her. Not from cardboard books with their primary-colored illustrations and monosyllabic rhymes. Lillian's mother dismissed the few that entered their house under the guise of guilt.

"There's no need to eat potatoes, Lily," she would say, "when four-course meals are ready and waiting." And she would read.

For Lillian's mother, every part of a book was magic, but what she delighted in most were the words themselves. Lillian's mother collected exquisite phrases and complicated rhythms, descriptions that undulated across a page like cake batter pouring into a pan, read aloud to put the words in the air, where she could hear as well as see them.

"Oh, Lily," her mother would say, "listen to this one. It sounds green, don't you think?"

And Lillian, who was too young to know that words were not colors and thoughts were not sounds, would listen while the syllables fell quietly through her, and she would think, This is what green sounds like.

After Lillian's father left, however, things changed, and she increasingly came to see herself simply as a mute and obliging assistant in the accumulation of exceptional phrases, or, if they happened to be somewhere public, as her mother's social cover. People would smile at the vision of a mother nurturing her daughter's literary imagination, but Lillian knew better. In Lillian's mind, her mother was a museum for words; Lillian was an annex, necessary when space became limited in the original building.

Not surprisingly, when it came time for Lillian to learn to read, she balked. It was not only an act of defiance, although by the time kindergarten started, Lillian was already feeling toward books private surges of aggression that left her both con-fused and slightly powerful. But it wasn't just that. In Lillian's world, books were covers and words were sound and movement, not form. She could not equate the rhythms that had insinuated themselves into her imagination with what she saw on the paper. The letters lay prone across the page, arranged in unyielding precision. There was no magic on the page itself, Lillian saw; and while this increased Lillian's estimation of her mother's abilities, it did nothing to further her interest in books.

It was during Lillian's first skirmishes with the printed word that she discovered cooking.

In the time since Lillian's father had left, housework had become for Lillian's mother a travel destination rarely reached; laundry, a friend one never remembered to call. Lillian picked up these skills by following her friends' mothers around their homes, while the mothers pre-tended not to notice, dropping hints about bleach or changing a vacuum bag as if it were just one more game children played. Lillian learned, and soon her home — at least the lower four and a half feet of it — developed a certain domestic routine.

But it was the cooking that occurred in her friends' homes that fascinated Lillian — the aromas that started calling to her just when she had to go home in the evening. Some smells were sharp, an olfactory clatter of heels across a hardwood floor. Others felt like the warmth in the air at the far end of summer. Lillian watched as the scent of melting cheese brought children languidly from their rooms, saw how garlic made them talkative, jokes expanding into stories of their days. Lillian thought it odd that not all mothers seemed to see it — Sarah's mother, for instance, always cooked curry when she was fighting with her teenage daughter, its smell rocketing through the house like a challenge. But Lillian soon realized that many people did not comprehend the language of smells that to Lillian was as obvi-ous as a billboard.

Perhaps, Lillian thought, smells were for her what printed words were for others, something alive that grew and changed. Not just the smell of rosemary in the garden, but the scent on her hands after she had picked some for Elizabeth's mother, the aroma mingling with the heavy smell of chicken fat and garlic in the oven, the after-scent on the couch cushions the next day. The way, ever after, Elizabeth was always part of rosemary for Lillian, how Elizabeth's round face had crinkled up into laughter when Lillian had pushed the small, spiky branch near her nose.

Lillian liked thinking about smells, the same way she liked the weight of Mary's mother's heavy saucepan in her hands, or the way vanilla slipped into the taste of warm milk. She remembered often the time Margaret's mother had let her help with a white sauce, playing out the memory in her head the way some children try to recover, bit by detail, the moments of a favorite birthday party. Margaret had pouted, because she was, she declared stoutly, never allowed to help in the kitchen, but Lillian had ignored all twinges of loyalty and climbed up on the chair and stood, watching the butter melt across the pan like the farthest reach of a wave sinking into the sand, then the flour, at first a hideous, clumping thing destroying the image until it was stirred and stirred, Margaret's mother's hand over Lillian's on the wooden spoon when she wanted to mash the clumps, moving instead slowly, in circles, gently, until the flour-butter became smooth, smooth, until again the image was changed by the milk, the sauce expanding to contain the liquid and Lillian thought each time that the sauce could hold no more, that the sauce would break into solid and liquid, but it never did. At the last minute, Margaret's mother raised the cup of milk away from the pot, and Lillian looked at the sauce, an untouched snowfield, its smell the feeling of quiet at the end of an illness, when the world is starting to feel gentle and welcoming once again. 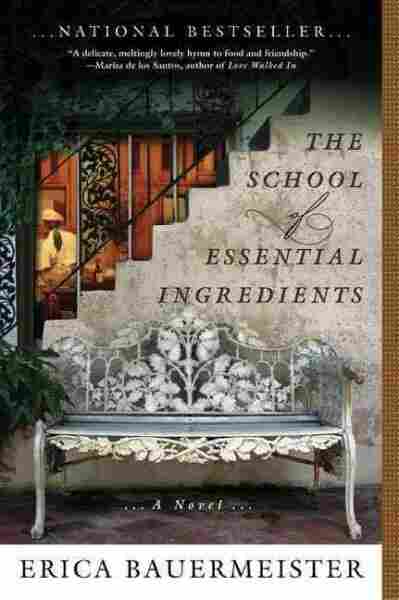 The School of Essential Ingredients