Accessibility links
Exclusive First Listen: Sunset Rubdown Compared to songwriter Spencer Krug's past efforts, Sunset Rubdown's Dragonslayer was made in a straightforward manner, recorded live in the studio. But there's nothing simple about the disc: Its stories sometimes resemble a cross between a whacked-out circus and a fairy tale. Hear the entire album. 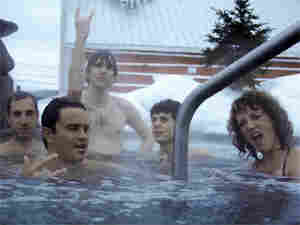 Audio for this feature is no longer available. The album was released on June 23, 2009.

While so much pop music is full of sweet sound, Sunset Rubdown makes bitter pop music. Nothing goes down easy, but the songs are still contagious.

Sunset Rubdown is one of Spencer Krug's three Canadian bands; Wolf Parade and Swan Lake (with Dan Bejar of New Pornographers and Destroyer fame) are the other two. This new Sunset Rubdown record, Dragonslayer, is more straightforward than usual for Krug. These are songs played more or less live in the studio — very much unlike Sunset Rubdown's 2007 album, Random Spirit Lover. That record was built using the tools and tricks of a studio.

This doesn't mean that Dragonslayer is any less creative, but Krug describes it as a more honest record. I'd call Dragonslayer a series of vignettes — small stories that sometimes feel like a cross between a whacked-out circus and a fairy tale. It may take a while to sort out the characters and stories in the songs, but they're all so much fun, you'll have plenty of chances to do it.

You Go On Ahead (Trumpet Trumpet II)