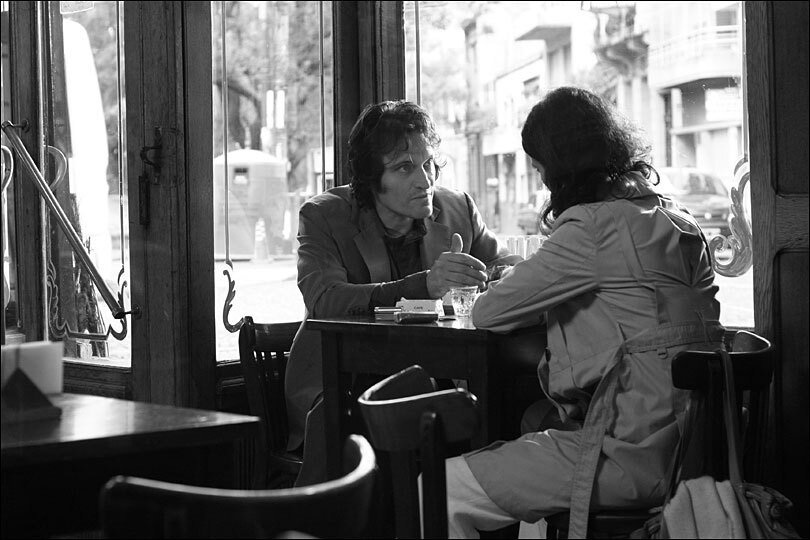 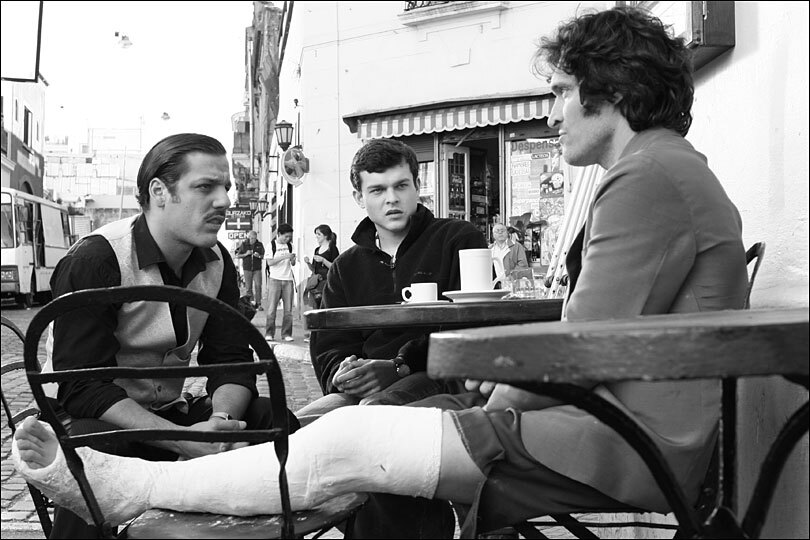 Jose (Rodrigo De la Serna, left) sits with brothers Bennie (Alden Ehrenreich) and Tetro, after Bennie tracks down the elder brother who abandoned him years before.

But the director also scripted this Oedipal melodrama, and his words are much less compelling than his images.

Tetro is the second product of Coppola's post-millennial comeback, following the trippy Youth Without Youth. Where that project originated with a novella by a Romanian-born author, Coppola's new effort draws on such 20th century American playwrights as Tennessee Williams and Eugene O'Neill.

The result is the saga of a profoundly unhappy New York clan — though the The Godfather director has set it in Buenos Aires, the Western hemisphere's most Italian city.

The movie opens with a glowing light bulb, of which take note: Headlights and other forms of concentrated, artificial illumination will be a motif. (Coppola has even made the title character, played by Vincent Gallo, "the best lighting guy" in the Argentine capital's hipper neighborhoods.)

Not that Tetro spends much time operating lights. His principal occupations are brooding, concealing his family background and barking at his indulgent girlfriend (Y Tu Mama Tambien's Maribel Verdu). There's a cache of mysterious manuscripts somewhere in the apartment, but Tetro denies being a writer.

Family mysteries gradually unravel after Tetro is located by his much younger half-brother. Almost 18, Bennie (Alden Ehrenreich) has taken a job on a cruise ship so he can get to Buenos Aires. He wants to know why Tetro abandoned him, leaving him behind with their domineering father (Klaus Maria Brandauer), an orchestra conductor who's as poisonous as he is famous.

While overstaying his welcome, Bennie establishes himself as a playwright by winning the support of a literary critic who calls herself "Alone" (Almodovar regular Carmen Maura). She invites the brothers to an arts festival in Patagonia, where their darkest secret can be divulged with glaciers as the dramatic backdrop.

The revelation fails to startle, because the movie's scenario is predictable, its dialogue stilted and some of its acting indifferent. Although Ehrenreich makes an impressive movie debut, Gallo offers a superficial performance, conveying Tetro's prickliness but not the torment beneath it.

Tetro is shot mostly in black and white, like Coppola's 1983 Rumble Fish, and that's not the only thing the two movies share. Both are about the relationship of brothers who are nearly a generation apart in age, and both emulate the style of 1920s German Expressionism.

With its hot whites, deep shadows and dramatic compositions, Tetro suggests the work of such directors as Fritz Lang and F.W. Murnau. In one scene, Tetro rebukes Bennie, and we see only the boy's stricken face and his brother's ominous shadow, an effect borrowed from silent movies like Nosferatu.

Later, when the brothers travel to Patagonia, the craggy peaks and glistening ice reflect the German mountain film — the pre-Nazi realm of Triumph of the Will director Leni Riefenstahl.

Amid these high-contrast monochromatic images, Coppola inserts flashbacks in an entirely different style: the color-saturated, ballet-inspired fantasies of British director Michael Powell. (There's even a clip from Powell's 1951 Tales of Hoffmann.)

Narratively, these faux-Technicolor asides are justified because Tetro's mother was an opera singer, while Bennie's is a ballet dancer. But the flashbacks have less to do with the story than with Coppola's cinematic tastes.

The good news is that you needn't be a film buff to appreciate the director's simulations of classic movie styles; the visuals justify themselves entirely.

In fact, Tetro might work better if Coppola had downplayed the secondhand drama and emphasized the film-history tutorial that's the movie's real passion.