Accessibility links
Regional Dictionary Tracks The Funny Things We Say The Dictionary of American Regional English is a multivolume collection of the nation's linguistic treasures — from pipjennies to mumble squibbles. Now, five decades after its inception, the final volume, containing words S to Z, is almost ready to be published. 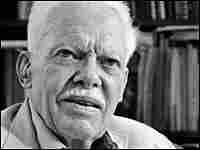 Linguist Frederic Cassidy was so committed to the DARE project that he continued to champion it after death. His tombstone reads, "On to Z!" Jeff Miller/Courtesy of University of Wisconsin-Madison hide caption 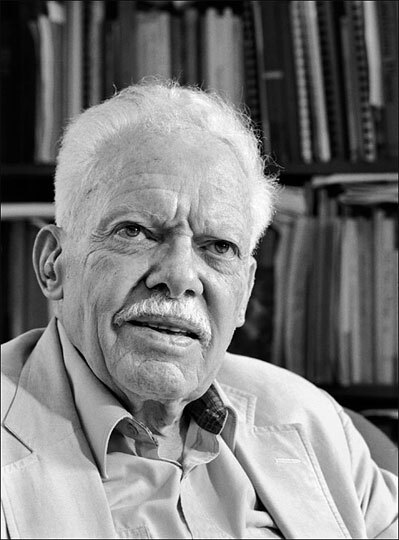 Linguist Frederic Cassidy was so committed to the DARE project that he continued to champion it after death. His tombstone reads, "On to Z!"

Jeff Miller/Courtesy of University of Wisconsin-Madison

If you're feeling nebby about the DARE but aren't ready to pungle yet, here's a flea in your ear: try a rantum scoot into the world of regional phrasings, below.

In 1993, President Clinton was giving a news conference when someone mentioned that a certain Air Force official had criticized him. "How could he say that about me?" Clinton responded. "He doesn't know me from Adam's off ox."

Most of the journalists at that news conference had no idea what Clinton was talking about. It turns out the president was using a regional expression that meant the official didn't know him at all — or didn't know him from Adam.

"Adam's off ox" is one of the phrases included in the Dictionary of American Regional English, Volume I: Introduction and A-C , part one of a multivolume effort to capture regional expressions.

The DARE project, as it is known, was initiated in the 1950s by Frederic Cassidy, a well-known linguist who sent field workers out across the country in "word wagons" to interview people. Cassidy's catalogers talked to nearly 3,000 people over six years, making recordings along the way in order to capture pronunciations.

The first volume of the DARE was released in 1975, with additional volumes following in time. But the final volume still had not been published by the time of Cassidy's death in 2000, and the linguist's tombstone reads, "On to Z!"

Now, after five decades of research, "S to Z" of the DARE will be published next year. Joan Hall, the book's chief editor, says the dictionary is unique because it tells us how we speak, rather than how to speak.

"It's very helpful because it's really more descriptive than prescriptive," says Stephanie Grayson, the founder of CorporateSpeechTrainer.com.

The DARE also helps capture obscure expressions before they fade away. Grayson says that in some ways, American language is becoming more uniform, and television and the Internet are giving us all a common vocabulary.

"We're living in a world of 140 characters or less on Twitter," she says.

Stanford University linguist John Rickford disagrees. He says people speak one way in e-mails and another way at the local coffee shop: "The primary driving force behind language use and language change is face-to-face interaction. And that takes place in smaller communities and smaller groups, the kinds of people you hang out with."

But when this reporter tested out some words from the DARE at a Starbucks in suburban Detroit, none of the patrons seemed familiar with a "monkey's wedding" (a chaotic, messy situation in Maine); "cockroach killers" (pointy shoes in New Jersey) or "mumble squibbles" (noogies, North Carolina-style).

While it's fun to learn about colloquial language, Hall says, there are serious practical uses for the DARE as well. Forensic linguists once used it when a little girl was kidnapped and police had only a ransom note to go on.

The key phrase in the note was "devil's strip," a term used only in a tiny section of Ohio to refer to the strip of grass between the sidewalk and the street. As it happened, one of the suspects on the police list was a man from Akron. After being confronted with the evidence, linguistic and otherwise, the man ultimately confessed.

Doctors also use the DARE to understand patients who use colorful language to describe their illnesses. A patient complaining of "the groundage" or "pipjennies" likely has a rash on the feet or pimples.

And of, course, there's always a social element to regional phrasings. When the final volume of the series is released next year, the completed DARE, containing 75,000 entries, will help you understand that if you're invited to a "pitch-in" or a "scramble," you're really going to a potluck.

A Rantum Scoot Into Regional Phrasings

The following definitions were adapted from the Dictionary of American Regional English.

elbedritsch (n) An imaginary creature which, as a practical joke, a greenhorn is sent to hunt or capture. (Usage: Southeast Pennsylvania)

honeyfuggle (v) To swindle or dupe; to intend to cheat or trick. (Usage: scattered)

mulligrubs (n) A condition of despondency or ill temper; a vague or imaginary unwellness. (Usage: scattered, but especially the South)

pungle (v) To shell out; to plunk down (money); to pay up. (Usage: chiefly West)

roller bird (n) blue jay (Usage: In the vicinity of Dothan, Ala., bluejays are often called "roller birds" because when chinaberries are ripe, the birds sit in the trees and gorge themselves until they grow drunk. Then they tumble out of the trees and roll on the ground, and the cats creep out and eat them.)