"Where Have All Your Good Words Gone" 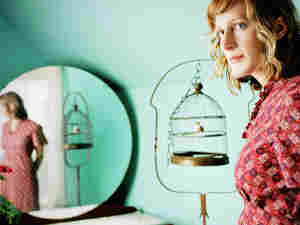 Singer-songwriter Laura Gibson was born and raised in a small logging town in Oregon. Her music, rooted in minimalist folk, reflects those circumstances, while also drawing influence from classical and jazz vocalists. Gibson's latest album, Beasts of Seasons, blends those elements with impressions of country music and even avant-garde folk. In this session with World Cafe, Gibson talks about her music — and Beasts of Seasons in particular.

Gibson wrote Beasts of Seasons in a rented house overlooking a cemetery in Portland. The album is broken into two parts: "Communion Songs" and "Funeral Songs."

"In writing the songs, two themes started to emerge," Gibson says. "They were the idea of reaching out to others, and also the idea of aloneness."

Appropriately enough, her songs grapple with the emotions surrounding death, whether they be fear, denial or acceptance.