Accessibility links
The E-Book Challenge: Amazon Versus Google The book industry as we know it is changing, and Google, the latest contender eyeing the electronic book market, has the clout to give the Amazon Kindle a run for its money. 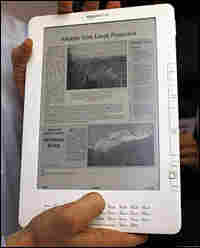 The book industry as we know it is changing, and publishers are hoping that Google, the latest contender eyeing the electronic book market, has the clout to give the Amazon Kindle a run for its money.

Though the Kindle makes it incredibly easy for consumers to buy a book in seconds — anywhere, anytime — from Amazon's online store, Michael Powell of Powell's Books in Portland, Ore., says the device leaves traditional booksellers "totally out in the cold."

"We can sit and press our nose against the window, but we cannot play a role in that," says Powell.

Powell notes that bookstore owners are not Luddites; his store has a sophisticated Web site, and he wants to be able to take advantage of new technology as it becomes available. If he's not able to do so with the Kindle, he hopes that Google might just give bookstores what they need.

The company announced recently that it has an e-book plan in the works that could be ready by the end of this year. The Google model promises a different e-book experience, one that doesn't require a reading device like Kindle. Instead of downloading books, users will buy online access to them. As long as readers are connected to the Internet, they could conceivably access the book from their local bookstores' Web sites — maybe even right from the publisher.

Gabriel Stricker, the director of book search communications at Google, says the company's plan is to create a "digital-book ecosystem," which he describes as "online space where you have the ability to have your books be discovered and make money off of them."

Stricker emphasizes that the idea is still in development, but he says that eventually Google's e-book service should be what he calls "device agnostic."

"We want to be able to have folks search for books anywhere, and not just when they happen to be at a computer," he says. "That could be when they are on a PC or a smart phone or a netbook or a dedicated reading device."

Publishers, who have been concerned that the Kindle would allow Amazon to control not just the e-book market but also the price of e-books, are likely to welcome Google's device-agnostic concept — especially since Google has the size, money and technical know-how to compete with Amazon.

Mike Shatzkin, a publishing consultant and CEO of the Idea Logical Company, says Google may also solve a problem for publishers that has haunted both the recording and film industries.

"What Google accomplishes here is that they totally sidestep the piracy and digital rights management issue, because there is no possession of the file, [and] therefore there is no way for you to give the file to anyone else," Shatzkin says.

But the question remains: Are avid readers — who are just starting to accept the idea of electronic reading devices — ready for an even more intangible notion of the book? Google is betting they are.