Accessibility links
Baghdad Shooting Victim Counseled Soldiers Navy Cmdr. Keith Springle devoted his life to helping members of the military cope with mental health issues. He was one of five service members allegedly gunned down last month by an American soldier in a military counseling clinic. 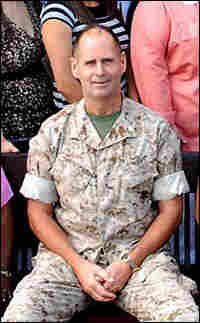 Cmdr. Charles Keith Springle was killed in Iraq last month, allegedly by one of the very people he was trying to help. Springle devoted his life to helping members of the military cope with mental health issues. U.S. Marine Corps/AP hide caption 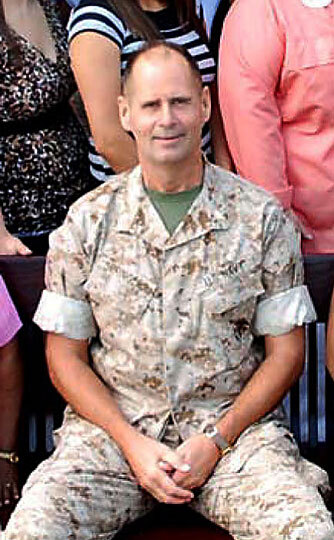 Cmdr. Charles Keith Springle was killed in Iraq last month, allegedly by one of the very people he was trying to help. Springle devoted his life to helping members of the military cope with mental health issues.

Navy Cmdr. Keith Springle devoted his life to helping members of the military cope with mental health issues. Despite his efforts to reach out to those dealing with post-traumatic stress disorder, Springle was killed in Iraq allegedly by one of the very people he was trying to help.

Springle didn't like to take "no" for an answer. When he was stationed in Rota, Spain, he wanted to form a baseball team so his high school-aged son could play ball. His wife, Susan, says everyone told him it wasn't possible.

"The powers that be said, 'You'll never be able to do it. You won't have enough for a team. We haven't been able to do it in the past, that's why we don't do it,' " she says. "And how many kids did we have show up? Thirty-eight kids who just wanted to play baseball."

Springle liked to break down barriers. His daughter, Sarah, says that as a social worker in the Navy, he fought the mental health stigma in a military culture where men and women are supposed to be tough.

"The help is available, but people just don't go get it because you're considered weak if you seek help. And that obviously leads to situations like this," she says.

Springle was one of five service members allegedly gunned down last month by an American soldier in a military counseling clinic in Baghdad. Today, Springle's work encouraging combat veterans to get the help they need continues at a marine counseling center in Camp Lejeune, N.C., where he worked.

Charlotte Wilmer, who works at the center, says it was converted from a schoolhouse a year and a half ago, and Springle was its first director. As she walks through the counseling center, she remembers his hands-on leadership.

"He would go around to every office and say, 'How are you doing? How's it going today?' " she says. "Everybody got a personal greeting, and he'd come to my door and say, 'I need to talk to you about something.' So then he'd sit down and we would hammer out something that he was doing — hash it out."

There are other reminders of Springle as well, such as soothing beach-themed paintings and the quiet hush of white noise machines allowing clients to seek counseling in peace. Wilmer says even with his duties at the center, Springle wanted to be in Iraq so he could work with the battle-tested men and women who needed him most.

"He not only volunteered, he fought for it. He really convinced the commanding officer and the Navy that this is where he should be, and he believed that," she says.

Back at the Springle home, Susan sits at the dining room table while Sarah and her husband switch off rocking their 2-month-old son, Joshua. Susan flips through an inch-thick stack of letters and e-mails she's received since his death. She stops when she finds the one she's looking for.

"Keith was a mentor, a friend and a devoted shipmate. He was a man that we can all only hope to emulate — a proud and loving father, a devoted and steadfast husband, a loyal friend and a courageous sailor," it reads.

Susan is collecting these notes because she wants her family to remember the man who has a baseball field in Spain named after him, the man who started a garage band so the kids could play at neighborhood gatherings — the man who never got to hold Joshua, their first grandson.