Accessibility links
Opportunities Fuel Argentina's Economic Rebound Six years after meltdown drove more than half of Argentina's population into poverty, the economy has stormed back. From a small boot maker to an employee-run textile cooperative, businesses are enjoying export-led gains. 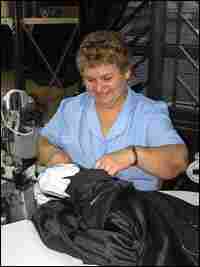 Celia Martinez got the political education of a lifetime when she and about 50 co-workers fought to appropriate Brukman's Textile Factory from its owners in the years that followed Argentina's 2001 economic collapse. Julie McCarthy, NPR hide caption 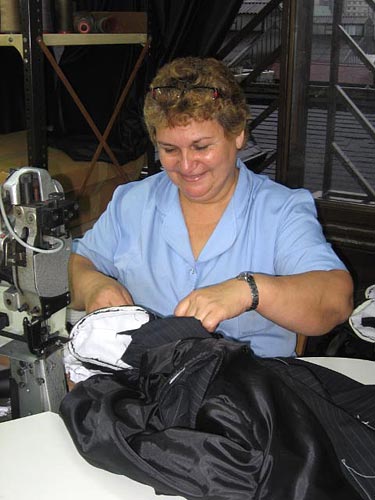 Celia Martinez got the political education of a lifetime when she and about 50 co-workers fought to appropriate Brukman's Textile Factory from its owners in the years that followed Argentina's 2001 economic collapse.

Argentine President Nestor Kirchner, who could seek re-election this fall, is widely acknowledged as having guided South America's economic sick man back to health. 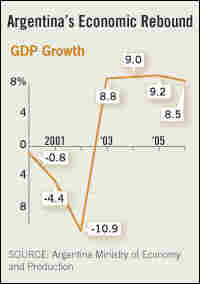 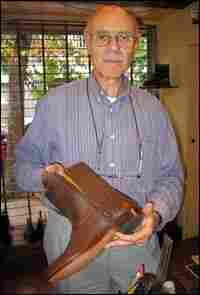 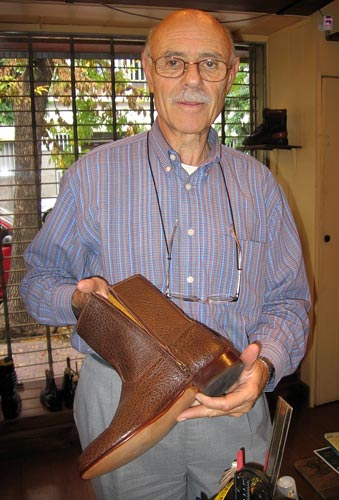 After being forced into the export market, Ricardo Lubieniecki's Buenos Aires-based boot company has seen booming growth in the past four years.

Six years after an economic meltdown drove more than half of Argentina's 38 million people into poverty, the economy has stormed back.

For four straight years, Argentina has posted growth exceeding 8.5 percent, a recovery that looks more like the emerging markets of Asia than of South America.

Booming exports are driving Argentina's economic revival. Economist Pablo Rojo says 60 percent of exports are in the agricultural sector and are guaranteed to hold as long as Asia's appetite for soy and other commodities does.

A depreciated Argentine peso — the currency went from one to the dollar before the crisis to three to one after it — has made Argentina's goods relatively cheap and thus attractive overseas.

It has opened an entire new world for one Buenos Aires boot maker.

Ricardo Lubieniecki owns the small footwear factory that his father founded 80 years ago. A bit of a showman, Lubieniecki entertains visitors in his showroom, interspersing stories of his success with Yiddish renditions of tunes from Fiddler on the Roof. "If I Were a Rich Man," seems apt, as does the lyric, "Sunrise, sunset, swiftly fly the years."

The boot business that Lubieniecki runs with his son Danny has swiftly grown at an annual 30-percent a year for each of the past four years.

Formerly a garden-variety boot store that outfitted local factory workers and jockeys, El Resero boot company has found a new niche as a provider of high-end riding boots to clients around the world. Customers from France, the United States, South Africa, Britain and Bahrain are clamoring for his footwear.

Lubieniecki says he never exported until Argentina's market collapsed along with the economy in 2001. To survive, he ventured overseas, seeking out industry expos and introducing his craftsmen to Europe's best designs.

"In crisis lies opportunity," Lubieniecki says. "Now you can take advantage of a crisis – in this case, an export market that forces you to improve your quality and to emulate the best.

In the rear of the showroom, a small team of employees hand-crafts the boots that sell for $100 a pair and up. The company that Lubieniecki's economist son Danny helped go global is now operating at full capacity. Working 50 hours a week, employees earn up to $500 a month.

"Staying small" is the secret to the company's success, Lubieniecki says.

There are other pockets of economic ingenuity popping up in Buenos Aires.

In a six-story building across town, a no-nonsense female work force wrested control of the Brukman Textile Factory from its owners. Now as an employee cooperative, the factory continues to churn out fine suits for men.

The phenomenon of employees taking over their workplace began in 2000, when owners ceased production, stopped paying wages, and filed for bankruptcy.

Celia Martinez, a leader of the employee fight for the takeover, recalls a fateful night in December 2001 at the start of Argentina's precipitous slide. The women were in a deep dispute with the owners, who had slashed their pay to little more than bus fare.

"They offered us 100 pesos and a suit and said, 'There's no money.'" Martinez says. "We said, 'How is that possible when we were making 200 suits a day?' Finally, one of the Brukman brothers threw the keys to the factory at us and said – 'Okay, if you think you can run this place, you try it!'"

What began as a simple demand for back wages escalated into a worker takeover. The women's struggle for the textile plant became the symbol of the recuperated factory movement in Argentina.

At Brukman's, the women feverishly filled orders and fought eviction. Millions were losing their jobs, and a stake in the factory was their only chance for survival.

When authorities dispatched armed guards to lock the facility down, the women mobilized a tent city that drew international attention and gave them the political education of a lifetime.

"I was a housewife, and this was my first job," Martinez says. "But neighborhood assemblies, leftist parties and the militant students inspired us. I learned about Marx and Trotsky, and workers' control."

After years of legal maneuvering, the women acquired the factory and some of its old debts. They've doubled their salary to about $80 a week. Dishonest salesmen have cheated them. They still struggle to stay afloat. But Martinez says that old clients stayed loyal.

"Many people came to us out of affection and solidarity with our fight," she says. "It was extremely empowering to be your own boss."

Labor experts say the biggest challenge for recuperated factories is getting credit, because many of them are stuck in legal limbo. Angry workers say their hard work and organization staved off greater instability for the country and they continue to demand recognition as permanent owners.

The battle-hardened seamstresses of Brukman's predict more labor unrest before Argentina's fragile recovery is through. The struggle has only enlarged their ambitions.

"As women, we don't just want the bread, we want the roses, too," Martinez says. "Today it's a factory, tomorrow it's a better salary and better health care. And for our children — a good education."

"We want everything," Martinez says.

That's an ambition no one dared dream just five years ago.