Accessibility links
Movie Review - In 'Moon,' Glimpses Of A Lonely Soul's Dark Night Sam Rockwell may be engaging enough to convince audiences that Moon is what it means to be: a brain-teaser for the thinking sci-fi crowd. But the film's plot goes slack just when it should be soaring. 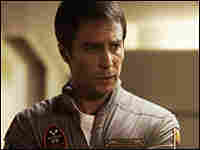 'Moon' Unit: Sam Rockwell plays Sam Bell, a helium-mining contractor who gets a little squirrelly toward the end of a three-year solo assignment on the moon. Mark Tille/Sony Pictures Classics hide caption 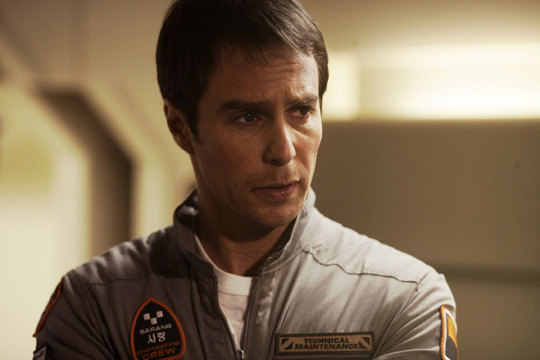 'Moon' Unit: Sam Rockwell plays Sam Bell, a helium-mining contractor who gets a little squirrelly toward the end of a three-year solo assignment on the moon.

'Let Me Go Outside'

Unforgiving Terrain: With a robot for a co-star and some solid special effects to frame him, Rockwell does his best to carry the movie. The story, unfortunately, proves an added burden. Mark Tille/Sony Pictures Classics hide caption

Unforgiving Terrain: With a robot for a co-star and some solid special effects to frame him, Rockwell does his best to carry the movie. The story, unfortunately, proves an added burden.

Actor Sam Rockwell has played his share of villains, but in Moon he's a decidedly engaging presence. So engaging, in fact, that he may well convince audiences that Duncan Jones' film is what it means to be: a brainteaser for the thinking sci-fi crowd.

You can see why Jones might have decided there was a need to be filled. There haven't been a lot of films lately to offer a glimpse of a future that isn't alien-infested or populated by folks for whom photon-blasters are the score-settlers of choice. Danny Boyle's Sunshine, maybe, with its save-the-planet ethos and its overstatedly pretty art direction — but even that devolved into a battle with a monster.

The story in Moon, about an astronaut who starts deteriorating mentally as his three-year solo stint on a lunar mining site is nearing an end, is a throwback to an earlier breed of science fiction: the techno-skeptical, isolated-in-space psychodrama.

The form blossomed for a time after Stanley Kubrick demonstrated its possibilities in 2001: A Space Odyssey, only to be eclipsed a few years later when Star Wars ushered in a cowboys-in-space era.

Still, the psychodrama approach had adherents. Think Silent Running (1971), with Bruce Dern and his droids tending what's left of the earth's plant life in pressurized geodesic domes out near the rings of Saturn. Or Solaris (Andrei Tarkovsky's 1972 Soviet original, not Steven Soderbergh's pallid Hollywood remake), with a distraught space-station crew experiencing hallucinatory episodes, and slowly realizing that they're being caused by the planet they're orbiting.

Moon is as cagey as its predecessors about doling out plot details in snippets. The film opens with an ad for Lunar Industries, a massive corporation that's mining the moon to extract Helium 3, a precious gas that apparently offers a limitless source of clean energy for Earth. Then we meet the corporation's only lunar employee, Sam Bell (Rockwell). He's in the final weeks of his contract, desperately lonely, and looks a bit the worse for wear.

Shaggy, overweight and barely going through the motions, Sam aches to go home to a wife and young daughter he can talk to only via videotaped messages. Good thing he's aided in his lunar activities by a Hal-inspired, emoticon-faced robot named Gerty (voiced by Kevin Spacey), or his tasks might not even get done.

Alas, Gerty's not around when Sam, driving out to retrieve a tank of Helium 3, has a meltdown and crashes into a huge mining machine. Waking up from the crash later in sick bay, Sam appears to be suffering from amnesia. He looks fitter than before the crash, though, and he's being monitored far more closely by Gerty. As he starts doubting his sanity and puzzling out what's happened, the audience will be doing the same, albeit none too feverishly.

The chief problem isn't that Nathan Parker's insufficiently twisty screenplay — based on a story by director Jones (nee Zowie Bowie, son of David) — dabbles overmuch in the psycho half of psychodrama.

Or that Rockwell, who's pretty charismatic as he holds the screen for two hours all by himself, ever stumbles while illuminating a fractured personality that is both at war with itself and its own best friend. The actor proves capable of embodying all sorts of contradictory impulses as his character becomes tragically self-aware.

But he can't overcome a plot that goes slack at precisely the moment it should be soaring, or a corporate-villainy premise that practically begs not to be looked at too closely. I'm as willing as the next guy to believe that unfettered capitalism is the sworn enemy of the working stiff, and that greed can cause a corporation to devalue the humanity of its workers. But start calculating the costs to Lunar Industries of its singular form of devaluing, and Moon's central premise stops making sense.

Jones marshals special-effects wizardry — and Rockwell's charisma — to finesse such objections more or less right up to the final credits. But once you emerge from the darkness of the multiplex, credibility evaporates on the instant.