Accessibility links
Regional Air Safety In Focus Following Buffalo Crash Safety at the nation's regional airlines is coming under intense scrutiny as Congress conducts three days of hearings on the subject in the wake of February's fatal crash near Buffalo, N.Y., that investigators say may have been caused by inadequate pilot training. 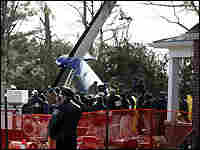 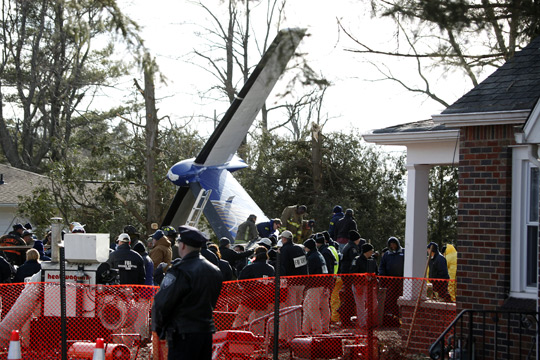 Workers and investigators clear debris from the scene following the Feb. 12, 2009, of the plane crash of Continental Connection Flight 3407 in Clarence, N.Y. 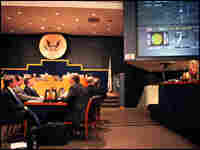 NTSB investigators played an animated re-creation of the final minutes of Continental Flight 3407 during a public hearing on May 12. Robert Giroux/Getty Images hide caption 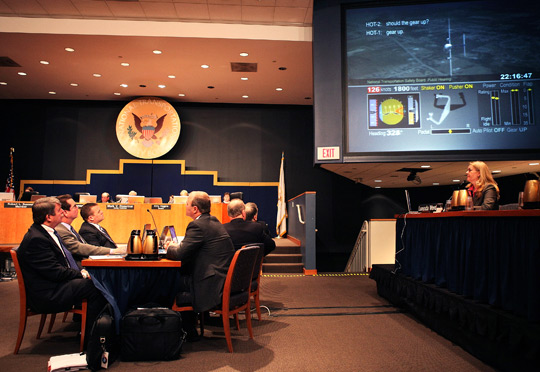 NTSB investigators played an animated re-creation of the final minutes of Continental Flight 3407 during a public hearing on May 12.

Safety at the nation's regional airlines is coming under intense scrutiny as Congress conducts three days of hearings on the subject in the wake of February's fatal crash near Buffalo, N.Y., that investigators say may have been caused by inadequate pilot training.

FAA Administrator Randy Babbitt and acting National Transportation Safety Board Chairman Mark Rosenker are set to appear before a Senate subcommittee to discuss the probe into why a Continental commuter plane crashed on approach to Buffalo Niagara International Airport on Feb. 12 in icy conditions — and how regulators can improve oversight. The House also planned to take up the issue.

Babbitt and Transportation Secretary Ray LaHood issued a joint statement Tuesday saying they planned to increase inspections of pilot training programs at regional airlines in response to the crash. They also are seeking voluntary efforts from the airlines to improve safety.

Call To Action Only 'A Start'

It's a discussion that the Air Line Pilots Association, International, a union representing some 54,000 pilots in the U.S. and Canada, believes is long overdue.

"The hearings are a start. The FAA's call to action is a start. We are looking forward to working with them," said Capt. Paul Rice, the union's first vice president. "This is not just one week to change the course of the industry. It's going to take longer than that."

Rice says many airlines are simply meeting, not exceeding, FAA guidelines, and he thinks that's not enough.

"In many, many countries, the requirement for academic knowledge for licenses is much higher than in the United States," he said.

"A lot of people either go online or go to the bookstore and get a list of questions that might be on the FAA test and memorize them," Rice said. He added that the test may take "a few hours on a Saturday morning," while in other countries, "it might take months of study and multiple days of testing."

The crash of Flight 3407, a Bombardier Dash 8 Q400 turboprop, killed all 49 passengers and crew as well as one person on the ground. The NTSB has said that a series of critical errors by the captain and co-pilot preceded the crash. The agency also raised concerns about pilot fatigue.

"This accident, as unfortunate as it is, has put a spotlight on this problem [of training]," says Keith Mackey, an aviation consultant.

Although the statement from Babbitt and LaHood is short on specifics, Mackey said that flight simulator exposure to icy conditions such as those encountered by Flight 3407 would be valuable.

"Turboprop airplanes have traditionally had issues with tail-plane icing, partly because they tend to fly at lower altitudes," Mackey said. "Particularly when you're flying one like this in the Northeast, where snow and ice are common conditions, extra training is likely needed."

The doomed Continental Connections flight was operated by Colgan Air of Manassas, Va. NTSB testimony has indicated that Capt. Marvin Renslow may not have had hands-on training on a key safety system designed to prevent the aircraft from stalling. That system, known as a stick pusher, noses the plane into a dive to help the pilot recover airspeed in the event of an impending stall. Without specialized training, the pilot's instinct is to pull back on the stick, thus precipitating a stall, which is what investigators determined Renslow did.

As the plane descended for its landing approach, the wings of the turboprop were icing up and Renslow can be heard on the cockpit voice recorder discussing the situation with his 24-year-old co-pilot, Rebecca Shaw. Shaw said she wasn't sure how much ice on the wings was too much and that she lacked experience flying in such weather.

Investigators said Renslow and Shaw then discussed personal matters when they should have been concentrating solely on their approach — something pilots call "sterile cockpit." The NTSB has cited this "nonessential conversation for at least three minutes" below 10,000 feet — a violation of FAA rules — as a possible contributing factor to the crash.

"The sterile cockpit requirements are one of those rules that has been written in blood, and it doesn't appear from the conversation on the cockpit voice recorders that it was being followed in this case," Mackey said.

"There should have been some cockpit conversation regarding recognizing the icing that were prevalent and that proper procedures were being followed as prescribed for such circumstances," he said. "Perhaps the pilot and first officer were not aware of the seriousness of the condition that they found themselves in."

Colgan's director of flight standards, John Barrett, has acknowledged that the flight instruments "were not being monitored, and that's an indication of a lack of situational awareness."

Another factor, crew fatigue, was also cited by the NTSB as a possible area of concern.

The Regional Airlines Association said Tuesday that it pledges "full cooperation" with any new safety measures or procedures that might arise from the investigation.

"Safety always has been and always will be our No. 1 priority," said RAA President Roger Cohen. "We support all steps DOT Secretary LaHood and FAA Administrator Babbitt call for to make this happen."

A spokeswoman for the RAA, which represents 43 member airlines in the U.S. and Canada, said the organization's members would "wholeheartedly comply to meet and, as is often the case, exceed the new training requirements."

Last month, Colgan Air defended the training of the flight crew and its policies on crew rest periods.

Colgan and its parent company, Pinnacle Airlines Corp., could not be reached by NPR. In a May 21 statement, Colgan said news reports that Renslow and Shaw did not receive training specifically to deal with the situation that confronted them "are inaccurate."

The flight crew "had thorough initial and recurrent training on how to recognize an impending stall situation through the stick shaker and how to recognize the aircraft's response to a possible stall. This training is consistent with programs and training equipment employed at all major air carriers," the statement read.

However, the airline said that since the crash, it had "instituted stick pusher demonstrations in a flight simulator, despite the fact that flight simulator training on this issue is not required by the FAA and is not standard in the airline industry."