A Distinctive Ode to Destructive Freedom

A Distinctive Ode to Destructive Freedom 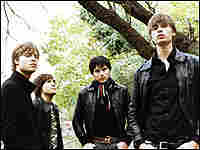 The Swedish garage band Mando Diao views the world from the windows of a tour bus. hide caption

On its new album, the Swedish garage band Mando Diao recounts its experiences in a world it calls Ochrasy — the dingy backstage rooms and after-hours bars inhabited by bizarre characters the group encountered on tour. While the songs often change settings ("Song For Aberdeen," "Amsterdam"), a central theme guides the disc: The world ain't pretty, especially from the windows of a tour bus. Alcoholic artists, drug dealers, people on meds and people who have gone off meds all feature prominently.

One of the most colorful characters is a homeless street musician. Mando Diao departs from rock 'n' roll formula on "Good Morning, Herr Horst," instead adopting haunting chord progressions punctuated by klezmer rhythms. The faintest hint of an upright bass beneath the layers of guitar twang and cymbal crash lends a slight music-hall vibe, but below the whimsical melody and rhythm lies a dark message. "I'm holding every beat steady and low," Bjorn Dixgard croons. "Now I'm bleeding / and I'm freezing / and I'm crying once again." The street musician's plight symbolizes a sort of destructive freedom unavailable to a band like Mando Diao, who must run every idea by labels, producers and one another. Herr Horst's song may be a tragic one, but he alone controls its rhythm.