Accessibility links
Ad Agency Finds 2-For-1 Deal In Downturn To make it through the recession, some companies are throwing out the workplace rule book. One small New York advertising agency has opened its doors to the industry's many unemployed workers, offering them office space to look for work. And in the process, it's making use of their skills. 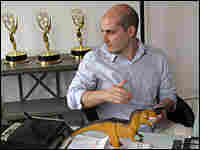 Emmy Award-winning adman Ariel Horn thinks he has a successful business model for his agency in this lean economy. Jim Zarroli/NPR hide caption 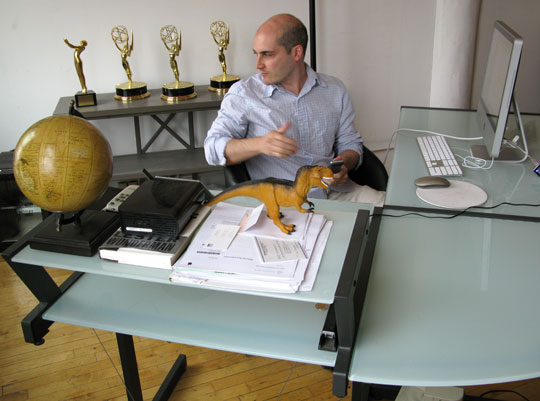 Emmy Award-winning adman Ariel Horn thinks he has a successful business model for his agency in this lean economy.

The lack of income isn't the only hard thing about being unemployed: There's also isolation and a loss of purpose.

Ariel Horn, who runs The Horn Corp., a Manhattan ad agency, has found both a way to help the numerous unemployed ad workers in New York, and a new business model.

"Typically, when times are tough, when you hit a recession, there's the natural tendency to want to shutter up and kind of close down until things wake back up," Horn says. "But we took a very different approach."

What Horn did was send out word that anyone in the advertising business who needed a job could use his office to look for work. They could bring their laptops, sit at one of his empty desks and spend the whole day sending out resumes.

On any given day, there's a small, shifting crowd here, like a pickup basketball game. It's a community of job-seekers.

And they're assets for Horn.

Take 36-year-old Gary Wapnitsky. He's worked at some of New York's biggest agencies. Now he's out of a job.

"It's very unusual to just be able to come into an office and plop yourself down with your computer and work on your own things. We're all trying to find full-time jobs while we're doing this, and we're all trying to help each other out," Wapnitsky says.

And while these job-seekers are here, Horn encourages them to brainstorm with him as much as possible. He wants them to talk about projects they'd like to take on — and they have a real company behind them if they want to pursue them.

Dustin D'Addato, head of production at Horn Corp., used to work in TV production at one of the big networks, but he became bored. He likes the loose, free-wheeling atmosphere here.

"When you're in a more corporate environment, anything that's out of the norm was beaten down right away," D'Addato says. "Here — I don't want to sound hokey — but we dream and give it a shot. We have enough connections where if somebody says, 'Hey, I think this would be a great idea for this company' — OK, well, let's ask them about it. Worst they could do is say no."

If one of the ideas takes, it could lead to a job for Horn and his agency. It's happened before, and when it does, Horn hires the person who came up with the idea. He pays them by the project, with no benefits. For Horn, this kind of business model has a big advantage. The people who come here have all kinds of backgrounds — digital marketing, social networking, music videos. It means Horn's agency can function like a much bigger company than it really is.

"[We] use the power of the people we have here," Horn says. "While we are a group that's been constructed primarily by our open-door policy, we do like to keep the structure of a real corporation."

Horn acknowledges that he's essentially getting free labor out of people. But he says he's also giving something back in a business where personal contacts are essential. Unlike most unemployed people, they have a real company to work at each day — and it might lead to real work.

It's an unorthodox strategy. But the advertising industry is undergoing seismic changes, and Horn says a fresh approach is the only way for a small agency like his to survive.