Accessibility links
'Colbert Report' Broadcasts From Iraq Comedy Central's Stephen Colbert has taken his show to Baghdad to entertain U.S. soldiers. All week, soldiers have been crowding into an old palace hall on a U.S. military base near Baghdad airport to catch The Colbert Report. 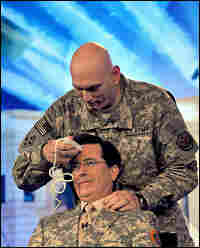 In this handout image from the USO, U.S. Gen. Ray Odierno prepares to give comedian Stephen Colbert a haircut. Steve Manuel/USO via Getty Images hide caption 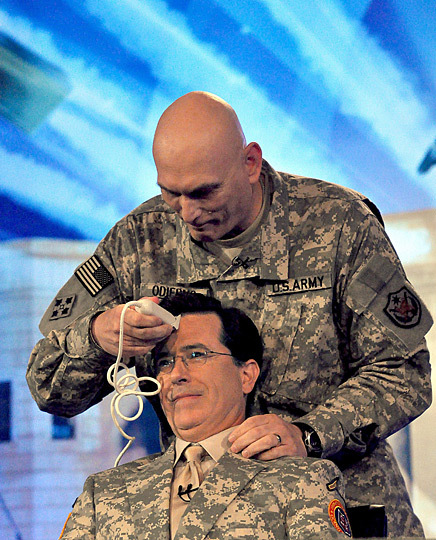 In this handout image from the USO, U.S. Gen. Ray Odierno prepares to give comedian Stephen Colbert a haircut.

All week, soldiers have been crowding into an old palace hall on a U.S. military base near Baghdad airport to catch The Colbert Report.

Most of the troops know by now that Colbert is a large donor to several charities for wounded veterans and their families. And during the first show in the series, he did something to prove his commitment. By video link from Washington, D.C., President Obama ordered the commander of U.S. forces in Iraq, Gen. Ray Odierno, to shave off Colbert's perfect anchorman's hairdo. Colbert spent the rest of the week broadcasting with a crew cut.

"I think it's great that he's out here to help cheer up our troops here," said Navy Cmdr. Otto Lee, a longtime fan. "It's humor; it's a very powerful tool to get people's attention. With the economy in the States, the war in Iraq and Afghanistan has taken a back seat in all of the news reporting."

Colbert's stage character is a parody of a right-wing conservative, but it's understood that his real politics swing in the opposite direction. In 2006, he let loose on President George W. Bush at the White House Correspondents' Association Dinner.

But John Hanson of the USO said there was no hesitation to bring Colbert to Iraq.

"Look at some of the old Bob Hope routines. He jokes about people — he'll say, 'Bet you thought you guys were going home by now,' that kind of thing," Hanson said. "We've brought Al Franken; we've brought Robin Williams. On the other side, we've brought Wayne Newton and Drew Carey, and none of them talked about politics. They're here to entertain the troops, and they all do that."

"We are making progress," Salih said. "We are moving along, thanks to the help of this wonderful U.S. military, who have come from afar to help us and give us a chance at building a decent nation here." The troops in the audience responded with loud cheers and applause.

"Please, sir," Colbert interrupted. "Let me tell you how this works: I do the pandering, OK."

Salih protested that he meant what he said. He is one of the few members of the Iraqi government who will publicly thank American troops for being in Iraq. Salih is from Iraq's ethnic Kurdish minority, which strongly supports the American occupation from its autonomous region in the north of the country.

"Now, sir, you're a Kurd," Colbert said. "You once advocated for a separate Kurdish state. Why is a united Iraq the best answer now?"

"Life is not about perfect solutions," Salih said. "Perhaps every Kurd would like to see an independent Kurdistan still. But we all have accepted — Kurds, Arabs, Shiites and Sunnis — that a democratic Iraq will provide all of these communities of Iraq with most of what they need."

"So you're kind of like Texas?" Colbert quipped. "You'd like to be your own state, but you see the reality on the ground."

The next guest was the head of ground operations in Iraq, Lt. Gen. Charles Jacoby. Again, Colbert demonstrated the growing power and influence of news parody. It was a rare instance in which Jacoby spoke to a journalist — or at least someone who plays a journalist on TV.