Accessibility links
City By City, A Night At The Symphony The San Francisco, Chicago and Boston symphony orchestras have all released new live albums recently; classical music critic Lloyd Schwartz had a listen, and he has a review.

Listen
City By City, A Night At The Symphony 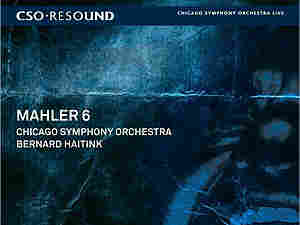 Many of the top U.S. Symphony Orchestras are now releasing recordings on their own labels. CSO resound hide caption

The American record industry has been in trouble. But some artists, classical as well as pop, have tried to do something about it. Following the example of the London Symphony Orchestra, three of the major American symphony orchestras are now releasing recordings of their live performances on their own labels.

On September 12, 2001, the San Francisco Symphony, under Michael Tilson Thomas, performed Mahler's "tragic" Sixth Symphony, an appropriate piece to play right after 9/11. Then the orchestra released a recording of that performance on its own label. It was so well received, the orchestra started to issue a series of their Mahler performances that is now nearing completion. These live recordings have been a good idea from several standpoints: they save money, the performances have greater immediacy and spontaneity without the numerous patchwork takes of recording sessions, and they're valuable souvenirs of memorable concerts.

Two of the so-called top-five American orchestras — the Chicago and Boston Symphony Orchestras — have now also begun to produce their own recordings. Coincidentally, Chicago and Boston have both released, either on CD or as a download, their own versions of Mahler's Sixth Symphony, which is certainly one of the most challenging pieces in the classical repertory — nearly an hour-and-a-half long, darkly intense, full of rhythmic, harmonic, and emotional twists, and with passages of sublime beauty. It's not a display piece, but it certainly shows just about everything a great orchestra can do.

It's fascinating to compare the more youthful, exuberant Mahler performance of San Francisco with the meticulously controlled Chicago version led by principal conductor Bernard Haitink. Then compare both Tilson Thomas and Haitink with the urgency and spaciousness of James Levine and the Boston Symphony, partly achieved by Levine's decision to go back to the old practice, long before stereo, of putting the first and second violins on opposite sides of the stage.

This is a good time for music lovers to be living in Boston. James Levine, who's been the music director of the Metropolitan Opera for more than a quarter of a century, came to Boston five years ago and transformed the orchestra, which had fallen into rough shape under the nearly 30-year tenure of its previous music director, Seiji Ozawa. Levine has wisely waited to release recordings until he was completely happy with his new orchestra, and they with him. I wish that the one contemporary piece they've issued, a Boston Symphony Orchestra commission, had been something other than William Bolcom's Symphony No. 8 — a choral setting of passages from William Blake's mysteriously opaque prophetic books. Despite some interesting orchestral color, it feels to me both bombastic and sentimental, and largely incomprehensible. But I have no reservations about the other releases. The Boston Symphony Orchestra has a famous old recording of Ravel's Daphnis and Chloe, but their new live recording sounds even more glamorous. And the Brahms German Requiem is one of the most moving and muscular versions I know.

The most exciting of the Chicago recordings is the rarely performed Shostakovich Fourth Symphony, a big work the Soviet censors kept from being performed for 25 years. And Shostakovich is one of Bernard Haitink's specialties.

All these recordings have the quality of "being there." Since I live in Boston, I've been to all the concerts that the Boston Symphony Orchestra has released and the recordings capture remarkably well what it was like to have been in Symphony Hall. Since the big record companies have been making fewer recordings with our major orchestras, it's a great thing these superb orchestras themselves have decided to take their futures into their own hands.