Accessibility links
WHO Declares Swine Flu A Pandemic The H1N1 virus has spread to a number of countries and is not stoppable, says World Health Organization Director-General Margaret Chan. But the agency cautions against overreaction; so far the strain remains mild. 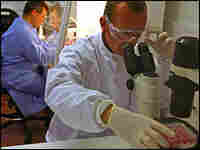 Scientists work in a lab at Vitrology Biotech Company on April 30 in Clydebank, Scotland. The company is attempting to develop a vaccine for the new H1N1 virus. Jeff J. Mitchell/Getty Images hide caption

The WHO Pandemic Declaration
Track The Pandemic
Interactive Timeline Of Cases

The World Health Organization has declared that a new version of an old flu strain has ignited the first global flu pandemic in 41 years.

WHO Director-General Margaret Chan told reporters Thursday morning that its flu experts unanimously agreed that a pandemic has begun.

"Collectively, we are satisfied this virus is spreading to a number of countries and is not stoppable," Chan says.

She ducked questions about what new evidence has emerged in the past few days to precipitate a declaration of something that many public health experts have said is obvious. The tipping point is widely thought to be the spread of flu in southern Australia, where more than 1,200 cases of the new flu have been counted in a matter of days.

But it also could have been the United Kingdom, which has officially reported 666 cases, but is thought to have experienced many more.

Chan did say that one deciding factor came from the Southern Hemisphere, which is just entering its flu season.

In Chile, the new virus is rapidly displacing older H1N1 strains — a sign that it is more "fit" than earlier flu viruses, possibly because no one has specific immunity to the new virus.

The declaration of a pandemic, Chan says, is intended to get nations around the world to get ready for a long and unpredictable battle against the new virus. But the WHO hopes nations will not overreact, for instance, by implementing or continuing draconian "fortress" measures designed to keep the infection outside their borders, or slaughter pigs in the mistaken belief that people can get swine flu from swine.

Beyond that, it's not clear what practical effect the declaration will have. Legal experts say it does not in itself authorize WHO to do anything different. But it does turn up the volume of WHO warnings and pleas.

"Some countries' political leaders worry about unwarranted action," Chan says. "And some are concerned because of the mildness of the disease. People will say, 'So? What's the big deal about the pandemic?' So they have the tendency to go into complacency. This is ... of great concern to WHO."