Accessibility links
Twister Trackers Try To Decode Tornadoes Vortex 2, the largest and most sophisticated tornado chase ever assembled, has been roaming the Great Plains for weeks looking to crack basic mysteries about the wildest storms on Earth. The $12 million federal program hopes to be able to warn people of tornadoes sooner and lower false alarm rates. 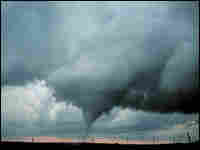 The federal government is spending $12 million to crack the basic mysteries about tornadoes, in an effort to save lives. OAR/ERL/National Severe Storms Laboratory hide caption 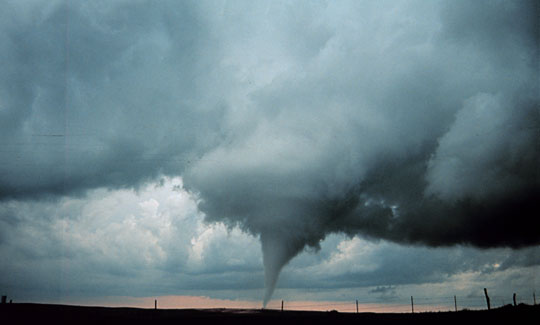 The federal government is spending $12 million to crack the basic mysteries about tornadoes, in an effort to save lives. 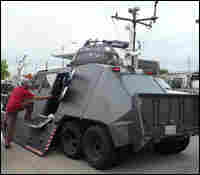 Filmmaker Sean Casey made this tornado intercept vehicle, or TIV, in front of his house in Studio City, Calif. "Tornadoes, you know, they're magical," Casey says. Frank Morris for NPR hide caption 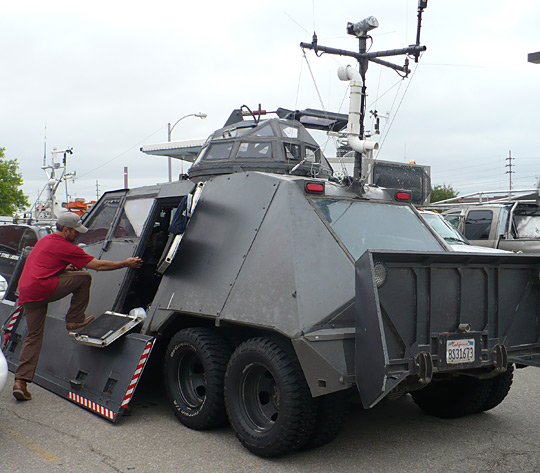 Filmmaker Sean Casey made this tornado intercept vehicle, or TIV, in front of his house in Studio City, Calif. "Tornadoes, you know, they're magical," Casey says. 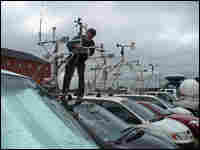 On Vortex 2, about 40 vehicles were deployed to surround and monitor tornadoes. Frank Morris for NPR hide caption 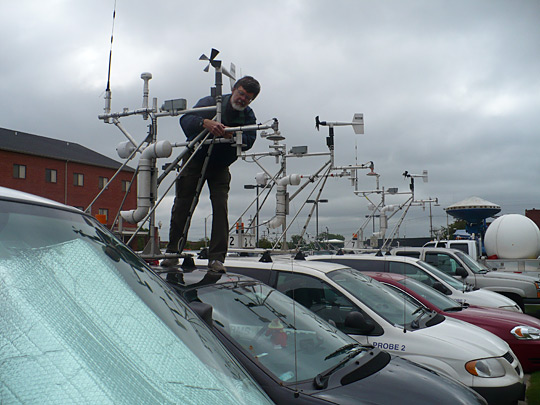 On Vortex 2, about 40 vehicles were deployed to surround and monitor tornadoes.

The largest, most sophisticated tornado chase ever assembled has been roaming the Great Plains for the past five weeks looking to crack some of the basic mysteries about the wildest storms on Earth.

Known as Vortex 2, the experiment winds down Saturday. The original Vortex in the mid-1990s inspired the movie Twister, in which scientists pursued tornadoes past flying tractors and right through an intact, rolling farmhouse.

The actual roving experiment hasn't been quite that kind of a white-knuckle ride, but it's a lot more important because understanding tornadoes will save lives. Even the answer to a seemingly simple question such as "how do tornadoes start?" isn't yet known. So the federal government is spending $12 million to try to find out.

Tornado sirens blare as a fierce storm lashes Maysville, Mo. The sky is dramatic, and a tornado seems imminent. A few miles away, in a truck humming with equipment, Eric Rasmussen watches, looking for clues as to why some intense thunderstorms spawn twisters and some don't.

"Well, that's the question that the whole experiment is about. You get a storm that looks like this, normally we would expect it to produce a tornado, but it's not," Rasmussen says. "So hopefully, all the data we gather, when we analyze it later, we can answer that question."

This truck is the command post for Vortex 2. Rasmussen shifts his attention between the clouds churning outside the window and the radar images and data flashing on his screens. Bright dots map some 40 vehicles he has deployed to surround and monitor this storm.

Ten radar trucks rush into position ahead of the storm — hail-dented minivans and trucks with banks of whirling gizmos on top. They paint a picture of the weather system with very high definition, overlapping images. "If you look at all the data, with all the radar, and it is, it's like little slices through different levels," Stine says.

Documentary filmmaker Sean Casey's homemade tank stands out from the rest. "What we have here is a 14,000-pound armored vehicle called the Tornado Intercept Vehicle, or TIV for short," Casey says.

Although he's not officially part of Vortex 2, he built the turtle-looking, ironclad monstrosity to take on the tornadoes. And getting close isn't good enough for Casey — he wants to drive into tornadoes. He loves them.

"Tornadoes, you know, they're magical," Casey says. "They're these ethereal entities that seemingly appear out of nothingness."

Unfortunately for Vortex 2, the jet stream took a freaky turn late this spring and all but shut down the High Plains tornado season. The fleet roamed for a month without seeing a single twister.

It was in Wyoming when the drought finally broke. Baseball-sized, windshield-cracking hail pummeled the Vortex 2 armada as it caught its first actual tornado. Josh Wurman, who co-directs the experiment with Rasmussen, says they were all over it.

"We got more scientific instruments, more different kinds of data, different varieties, more radars, more surface instruments, than we ever had before," Wurman says. "So it is by far the most studied tornado ever."

Those mountains of data will come in handy.

"If we can understand more about tornadoes, then we can make better warnings," he says. "If we can get the warning lead time up from its current 13 minutes to 20 or 30 minutes, that's great. People's lives will be saved. If we can reduce the false alarm rate from its current 70 percent down to 50 percent or even lower, then those warnings will be more precise. People might take action more if they know there's a lower false alarm rate."

Mission Complete, But No Tornado

Back in the command truck in Missouri, Rasmussen is tapping out a message to the rest of the fleet: "No tornado today."

"[The] mission has ended. Nice deployment here," Rasmussen says as he types. "OK, that's it. And now we start looking at tomorrow."

Rasmussen brings up a complicated looking weather map and plots the next day's course. He's also looking ahead to the second year of this experiment and perhaps to better hunting when Vortex 2 goes on the chase next tornado season.