Accessibility links
'Yours Truly,' Jason Lytle After 15 years with the band Grandaddy, frontman Jason Lytle packed his bags and moved to big sky country. In Montana, he built a home studio, then spent two years recording his first solo album, Yours Truly, the Commuter. 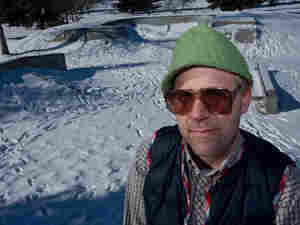 After 15 years with the band Grandaddy, singer Jason Lytle packed his bags and moved to big sky country. In Montana, he built a home studio, then spent two years recording his first solo album, Yours Truly, the Commuter.

Lytle's fresh start in Bozeman, Mont., worked. In a new town, far from the ghosts of his hometown of Modesto, Calif., he reinvented himself and reconnected with his passion for music. Fans of his Grandaddy material, however, needn't worry about a radical departure from his old sound.

The finished project, Yours Truly, the Commuter, sounds much like a Grandaddy album. There's a familiar balance between electronic and acoustic instrumentation, and a thematic throughline from his previous work. It seems Lytle has grown no more comfortable with his time on the road, and his struggle between life as a working musician and life as a solitary, responsible citizen peeks through.

Jason Lytle is on tour through July. Rusty Miller, singer for the group Jackpot, joins him here.

Jason Lytle got his start as the frontman for the Modesto, Calif., rock band Grandaddy. Through the '90s, until the group disbanded in 2006, Grandaddy built a loyal audience by making beautifully orchestrated, neo-psychedelic space-pop. It was a carefully crafted blend of gentle acoustic strums and swirling electronics, with Lytle's lyrics exploring the lives of the lonely, the heartbroken and robots with drinking problems.

This year, Lytle returns with his debut solo album, Yours Truly, The Commuter. It's his first release since the breakup of Grandaddy, and it essentially picks up where the band left off, confirming Lytle's place as that group's primary creative force.

Lytle showcased some of his new songs during several brief performances at this year's South by Southwest music festival. He took time out of his schedule to meet with NPR Music for this video shoot at the historic (and cavernous) Driskill Hotel in Austin, Texas. He's joined by Rusty Miller, singer for the group Jackpot.