Accessibility links
A Better Life Through Home Dialysis After several months of spending three hours a day, three times a week at the dialysis center, Christopher Moore started using a home dialysis machine. Now the 28-year-old has not only found more time to enjoy life, but has also seen his health improve. 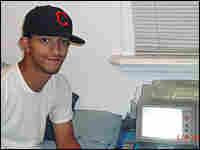 Moore began home dialysis a couple of months after being diagnosed with chronic kidney disease. The machine cleanses his body of toxins while he sleeps. Courtesy Christopher Moore hide caption 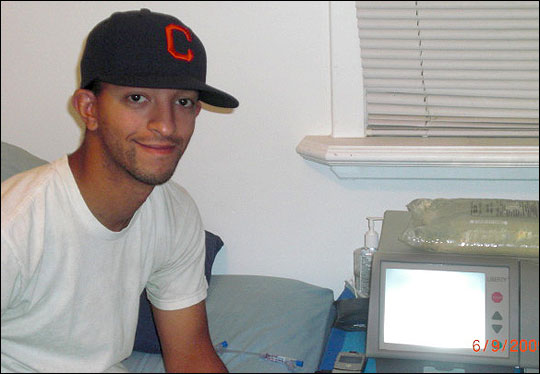 Moore began home dialysis a couple of months after being diagnosed with chronic kidney disease. The machine cleanses his body of toxins while he sleeps. 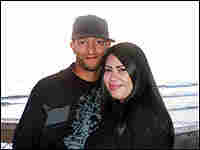 Christopher Moore and his partner, Lisa Cadenas, have been dealing with his chronic kidney disease since last October. Now with home dialysis, Cadenas says Moore has more time and energy to do what he loves. Courtesy Christopher Moore hide caption 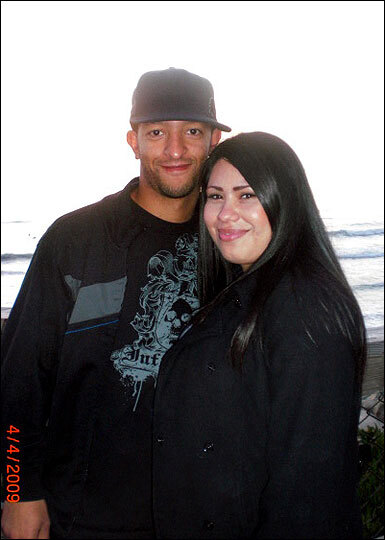 Christopher Moore and his partner, Lisa Cadenas, have been dealing with his chronic kidney disease since last October. Now with home dialysis, Cadenas says Moore has more time and energy to do what he loves.

An increasing number of people with kidney disease are turning to home dialysis. Not only does this practice save patients hassle and time, but studies are finding that those who do home dialysis also do more frequent cleansings, which can lead to better overall health.

For Christopher Moore, being able to take care of health problems at home means a life worth living, he says.

This past October, Moore, just 28 years old, returned to Los Angeles from a trip to Baltimore tired and with a terrible headache.

"On the flight back, I just didn't feel good at all," he says. He rested a few days, but still felt quite ill. His partner, Lisa Cadenas, urged him to go to the doctor.

Moore balked, but finally went to a local emergency room. Doctors at first thought he had meningitis because his headache was so severe. After a number of tests and blood work, they diagnosed chronic kidney disease. They immediately inserted a catheter into Moore's shoulder so hemodialysis could be started to filter toxins that had built up in his blood. Moore was in the hospital for about two weeks.

Doctors never figured out exactly what happened to Moore to trigger the disease. In kidney disease, tiny structures in the kidneys called nephrons are attacked, causing them to lose their filtering capacity. The nephrons are destroyed slowly and silently, so that only after years or even decades does the damage become apparent. Moore's doctors think his disease could have been a reaction to an antibody from a childhood illness similar to chicken pox, which, over the years, slowly caused his kidneys to lose function. Today, Moore's kidneys have less than 15 percent normal function.

For the first few months, Moore was treated at a nearby dialysis center. "I liked the people at the center," he says. "I just didn't like going to the center." Moore says that even with dialysis, he was always tired and had to stop working. He went to the center three days a week for three hours each day. When his doctors suggested that he try a different type of dialysis, one he could do at home during the nighttime while he slept, he enthusiastically agreed.

A growing number of kidney disease patients are turning to home dialysis. There are several ways to do the treatment at home. The system Moore uses is called continuous cycling peritoneal dialysis (CCPD). CCPD and other versions of peritoneal dialysis filter out toxins in the blood, like hemodialysis does, but use the peritoneum, the lining of the abdomen, as the filter. An electrolyte fluid, usually containing glucose and sodium among other minerals, is pumped into the abdominal cavity via a permanent catheter in the abdomen. The fluid draws toxins out of the blood and then is pumped out of the body, clearing the toxins.

Moore keeps his dialysis machine on the nightstand next to his bed. It works automatically while he sleeps. Moore says that "throughout the night, the machine will go through a series of drains and fills. I do about four a night. The machine will drain, and then it'll refill, and it will dwell for two hours; and then it will refill, and then it will dwell for two hours; and it does that four times throughout the night."

The used solution drains into a plastic bag, which is later thrown away.

"He's happier," says Moore's partner, Lisa, and this type of dialysis doesn't take up so much of his day. She says he is not as tired as he was when he underwent dialysis at a center, and he doesn't nap all the time, she says. And now, he has energy to get on with his life, hang out with friends, play with his two dogs and work with his buddy on his truck — a 1967 Chevy he hopes to prepare for an auto show sometime next year.

Deciding If Home Dialysis Is The Right Option

For home dialysis to work, patients need to have at least some kidney function left. Otherwise, hemodialysis, which directly filters the blood and is complex to deliver at home, may be a more effective option.

Patients also have to be trained to set up and use an automatic dialysis machine like the one Moore uses. Training consists of simulating the process, studying the manual and, finally, practicing the real thing. The training takes a few hours a day for about a week. Moore says it was well worth it.

"There's always a risk of infection; it's the No. 1 risk," says Dr. Dylan Steer, a kidney specialist at Scripps Memorial Hospital La Jolla in California. Steer says the infection risk comes from the catheter, which connects the "outside world where there are a lot of germs. It's a dirty, dirty place" to the "sterile environment of the abdomen."

A lot can go wrong, he says. "Even one small lapse in technique can lead to a very severe abdominal infection."

So, during the preparation for dialysis, patients like Moore methodically wash and rinse their hands three times before making that connection. They also wear a mask over their mouth and, when the connection is actually being made, anyone else in the room also has to don a face mask.

Still, there can be mishaps: Air can get into the tubing; a connecting line can kink. If this happens, an alarm will go off, and the machine will start beeping, alerting the patient who will wake up, reset the machine and begin again. "It's not a big deal," Moore says.

Steer is enthusiastic about home dialysis. "Patient outcomes are better," he says. And patients who do dialysis at home tend to do it more often than those who travel to centers to have dialysis three to four times a week.

Those who do dialysis at least six times a week or more have "exceptional" control of their metabolic function and toxins, says Dr. Bryan Becker, a kidney specialist at the University of Wisconsin School of Medicine and current president of the National Kidney Foundation. Well-controlled studies have shown that the extra amount of time on dialysis makes a big difference, he says.

Every year, Becker says, about 6,700 dialysis patients opt for peritoneal dialysis at home. And most of them do it at night, which puts them at greater opportunity for health benefit. About 5,000 patients are on home hemodialysis. Overall, Becker says about 25,000 patients with chronic kidney disease get home treatments, nearly 8 percent of the roughly 320,000 patients nationwide who are on dialysis.

Moore says that by doing dialysis at home, he can better cope with his disease. And he can travel: The CCPD machine is about the size of a carry-on suitcase and weighs less than 30 pounds. And, other than not going in oceans, lakes or hot tubs because of potential bacterial infection, Moore says he can do pretty much anything. He plans to return to college this fall, get a degree in business and then get a full time job. He's also waiting for a kidney transplant. Both his sister and Cadenas are currently undergoing tests to see if they are a match and can donate a kidney.