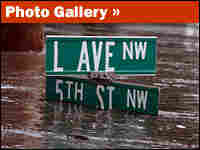 On June 13, 2008, the Cedar River crested almost 20 feet above flood level. That was more than 11 feet higher than the previous record flood. Heavy winter snows and an exceptionally wet spring, capped by torrential thunderstorms, swelled the river as wide as the Mississippi. Ten square miles of Cedar Rapids was under water — including about 1,000 businesses and more than 5,000 homes.

"We had 8 foot of water in the building," said flower shop owner Al Pierson. He's 6-foot-3 and stretches up to show how high the water rose in his shop in the northwest section of the city. It is a mostly working-class neighborhood across the river from downtown. It's full of older houses, many of which are boarded up or hollowed out.

That community, and the adjacent Czech Village neighborhood to the south, were the hardest hit by the floodwaters.

"We lost everything," Pierson said. "Everything in here looked like a bomb went off."

Pierson says that includes the adjacent house his grandparents built, and the one next door that he grew up in. His grandparents started the shop 80 years ago. It suffered $1 million in damages. Pierson didn't have insurance.

"What went through my mind: "I'm done. I'm finished. I'm out of business," Pierson said.

He eventually decided to clean up, repair and try to reopen. He became frustrated trying to obtain government assistance, but with a loan from the local credit union, the flower shop was able to reopen last November.

What Pierson lacks is many of his neighbors and customers. Few displaced residents have been able to repair or rebuild their homes.

There is some home rebuilding under way. Sometimes it's just one or two homes on a block, and much of the work is being done by volunteers. The few residents who can afford it are renovating their homes themselves.

The majority of the homes damaged or destroyed were small. They were valued at $50,000 to $80,000 and were occupied by lower income homeowners or renters. Few had flood insurance.

"For one flood survivor who is trying to rebuild their house, they have to go through nine steps with the federal government in order to get payment," said Lu Barron, chairwoman of the Linn County Board of Supervisors. "That is very cumbersome, it's very discouraging, and it makes recovery so slow."

Those who don't want to rebuild — or can't — are waiting for possible government buyouts. Many residents have run out of emergency government aid. Hundreds remain in FEMA trailers, while others struggle to pay for both rental housing and the mortgage on a flood-damaged home.

Housing and Urban Development Secretary Shawn Donovan, who was in Cedar Rapids this week, promised that the Obama administration would work to streamline the bureaucratic process.

He also announced $500 million in new federal flood recovery funds for Iowa. Some of that money will go toward the long-awaited buyouts.

But local officials say much more federal funding is needed, and it may take 10 years or more for Cedar Rapids to fully recover.