Accessibility links
Polls Close In Iran's Presidential Vote Iranians jammed polling stations from the capital city of Tehran to the countryside Friday to choose between President Mahmoud Ahmadinejad and his reformist rival. The fiery campaign unleashed passions that bought huge numbers of voters to the polls. 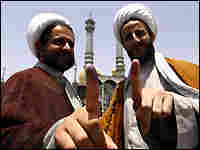 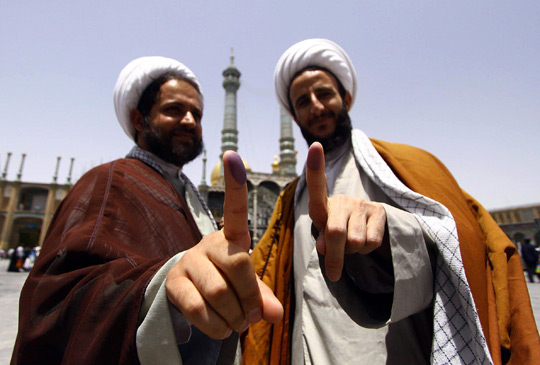 Iranian clergymen show their ink-stained fingers after voting Friday in the Shiite holy city of Qum, south of Tehran. 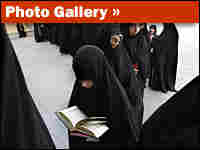 A Look At The Campaign In Iran 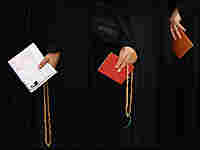 Women hold prayer beads and registration cards as they line up to vote in Qum. Amir Hesami/AFP/Getty Images hide caption 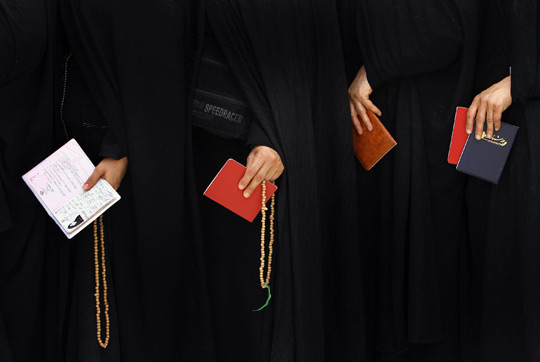 Women hold prayer beads and registration cards as they line up to vote in Qum. 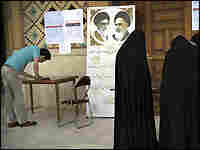 Iranian women and men choose their candidate before casting their ballots in a mosque transformed into a polling station in Tehran. Olivier Laban-Mattei/AFP/Getty Images hide caption 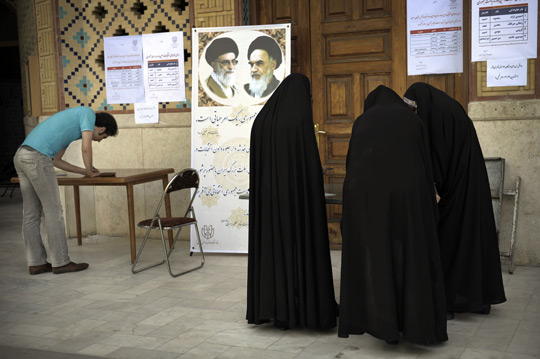 Iranian women and men choose their candidate before casting their ballots in a mosque transformed into a polling station in Tehran.

After a day that saw a massive voter turnout, polls have closed across Iran and both leading candidates in the race for president are claiming victory Friday.

Iran's state news agency, IRNA, reported that President Mahmoud Ahmadinejad won re-election Friday, but his main reformist challenger also proclaimed himself the winner at a news conference moments earlier. Neither the report from IRNA nor the competing announcement by former Prime Minister Mir Hossein Mousavi gave details as to what the claims were based on.

Turnout was reported to be heavy — perhaps unprecedented — as lines began forming immediately and people waited for hours to cast ballots at some stations. Authorities permitted polls to stay open an additional six hours until midnight (3:30 p.m. EDT). More than 46 million Iranians are eligible to vote.

The stakes are high, with Ahmadinejad facing his stiffest challenge from Mousavi. The two men were in a neck-and-neck battle going into the election.

The Interior Ministry, which oversees voting, said all rallies or political gatherings would be banned until after the announcement of results, expected Saturday.

The race will go to a runoff June 19 if no candidate receives a simple majority of more than 50 percent of the votes cast. Much depends on how many votes are siphoned off by the two other candidates: conservative former Revolutionary Guard commander Mohsen Rezai and moderate former Parliament speaker Mahdi Karroubi.

President Obama said Iran's "robust debate" leading up to Friday's presidential elections is evidence that change is possible, and he expressed optimism that U.S. diplomatic efforts could get a boost no matter who wins.

"Ultimately the election is for the Iranians to decide, but ... you're seeing people looking at new possibilities," Obama said at the White House. "And whoever ends up winning the election in Iran, the fact that there's been a robust debate hopefully will help advance our ability to engage them in new ways."

The outcome, however, is not likely to alter Iran's main policies or sway high-level decisions, such as possible talks with Washington. Those crucial policies are all directly controlled by the ruling clerics headed by the unelected Supreme Leader Ayatollah Ali Khamenei. Khamenei cast his ballot Friday and urged others to do the same.

A campaign organizer for Mousavi said about a dozen of the president's supporters attacked one of Mousavi's campaign offices in Tehran with tear gas. No one was injured. The incident could not be independently confirmed.

Earlier, Mousavi's campaign lodged a protest charging that election monitors had been blocked from taking up their posts at some voting stations. There also were reports that Tehran's cell phone text messaging system was experiencing technical problems. The Mousavi camp has used text messages as a means to send campaign information quickly to large numbers of people.

A top Mousavi aide, Ali Reza Beheshti, also said some polling stations in Iran's northwestern and southern provinces ran out of ballots, claiming it was a "deliberate attempt by the government to keep people from voting."

Mousavi's rallies in Tehran drew tens of thousands of cheering supporters who spent their nights shouting anti-Ahmadinejad slogans and dancing to Persian pop songs on the streets.

The highly charged atmosphere brought blistering recriminations against Ahmadinejad — who Mousavi said was moving Iran to a "dictatorship" — and a stunning warning from the ruling establishment. The political chief of the powerful Revolutionary Guard warned Wednesday that it would crush any "revolution" against the Islamic system by Mousavi's "green movement," the signature color of his campaign.

Iranians around the world also took part in the vote. In Dubai, home to an estimated 200,000 Iranians, the streets around the polling station at the Iranian Consulate were jammed with voters who overwhelmingly seemed to favor Mousavi.

With the race considered too close to call, a top election official predicted that turnout could surpass the nearly 80 percent in the election 12 years ago that brought President Mohammad Khatami to power and began the pro-reform movement. A strong turnout could boost Mousavi. He is counting on people younger than 30, who account for about one-third of Iran's electorate.