Accessibility links
Even In Bleak Times, The Ukulele Thrives Some music shops have reported that sales of musical instruments are down 20 percent nationally. But even in that climate, ukuleles are flying off the shelves at retailers from Michigan to California. 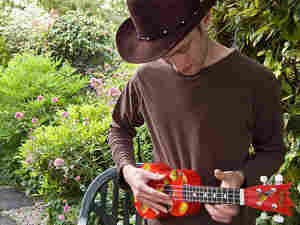 At Oz's Music in Ann Arbor, Mich., about 20 people cram into a studio for a monthly ukulele jam, and it's cozy. Everyone strums a ukulele. They cruise through song after singable song.

At 22, Danielle Willner is one of the youngest people in the room. Willner, who sports a ukulele necklace and has a ukulele tattoo, recently got laid off from her job at a cafe. She says the instrument helped her take her mind off not having a job and helped her focus on something more productive.

"I had a really rough time with it," she says. "I wasn't sure what I was going to do. The economy's not great here in Michigan; job market's not great. I went home and pretty much played for three days straight to help me get through the initial shock. It was very helpful and very therapeutic."

Stan Werbin owns Elderly Instruments in Lansing. He sells ukuleles, among other instruments. During the holidays, he says, he sold out of ukuleles. This year, he estimates that his sales are up by 10 to 15 percent — a big deal, given that overall, instrument sales are down by around 20 percent.

Ukulele sales are up nationally as well as locally. Mike Upton, president of Kala Ukulele in California, says he's selling ukuleles faster than he can make them. Upton says ukes don't cost a ton of money — you can pick up a decent instrument for $30. His best-selling ukulele goes for $100. He says his sales of ukuleles are up 76 percent from 2007 to 2008 and he expects that trend to continue this year.

Then there's the ukulele's sound. Many people associate the uke with Hawaii and that tropical vibe. But actually, the ukulele was brought to the islands by Portuguese immigrants. Upton calls the ukulele's tone bright and beautiful.

"Just the sound of the instrument is wonderful," he says. "It has a happy sound. It's tuned in a major key when you strum the open strings. It's hard to be sad when playing the ukulele."

At the jam, the musicians have been playing nonstop for two hours. John McAuliffe is one of those jamming musicians. He teaches ukulele workshops at senior centers, children's camps and RV parks.

"If you've had a rough day, whatever you're doing, if you're working or you have difficulties, you pick up the ukulele and strum it a few times," McAuliffe says. "Then pick out a song you want to try, and all of a sudden, things are better."

He says playing the ukulele might not make things better forever. But for the moment, it can, and for him, it does.