Accessibility links
American Christian Funding Flows To Jewish Settlers President Obama has called on Israel to stop expanding Jewish settlements in the West Bank. But U.S. evangelical Christian groups continue to raise millions of dollars for the communities, which many others see as an obstacle to peace between Israel and the Palestinians. 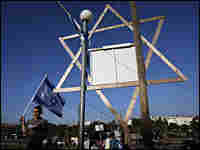 An ultra-Orthodox Jewish boy holds an Israeli flag as he walks in a Jewish outpost outside the settlement of Kiryat Arba, near the West Bank city of Hebron. Menahem Kahana/AFP/Getty Images hide caption 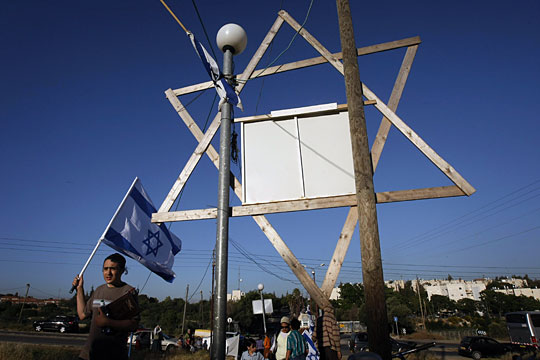 An ultra-Orthodox Jewish boy holds an Israeli flag as he walks in a Jewish outpost outside the settlement of Kiryat Arba, near the West Bank city of Hebron. 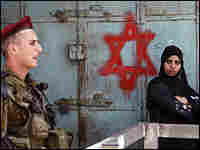 An Israeli soldier stands guard at an army checkpoint in the center of Hebron as a Palestinian woman looks on. Menahem Kahana/AFP/Getty Images hide caption 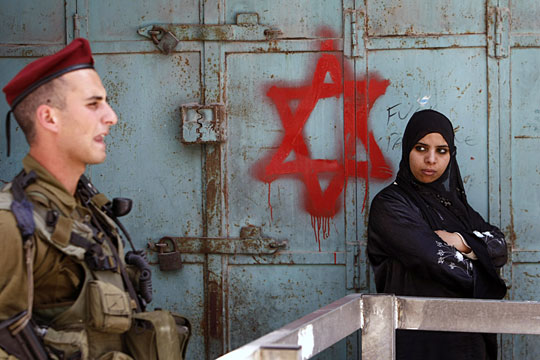 An Israeli soldier stands guard at an army checkpoint in the center of Hebron as a Palestinian woman looks on.

As President Obama calls on Israel to stop expanding Jewish settlements in the West Bank, support for the settlers remains strong among evangelical Christian groups across America. They are raising millions of dollars for the settlements, which critics view as a major obstacle to peace between Israel and the Palestinians.

On a recent afternoon in a Jewish settlement in the heart of the West Bank city of Hebron, a group of visiting American Christians peruses a display case of olive wood crosses amid the blaring music of Jewish Bible verses set to song. Several of the visitors wear pins of interlocking Israeli and American flags. It's a sign, they say, of their commitment to the Jewish state.

Christian support — through tourism and donations — brings in millions of dollars, leading anti-occupation groups to accuse the U.S. of sending mixed signals. While successive U.S. administrations have called Jewish settlements a stumbling block to peace, the American government allows U.S. citizens to directly fund them.

David Wilder, a spokesman for the Jewish settlers in Hebron, says the support is important.

"There are many people who are not Jewish, who very much love the state of Israel, they love the land of Israel, they understand the necessity for the Jews to be here, and they express that love in different ways. One of those is financially," he says.

Much of the support comes from fundamentalist Christians, who believe in biblical prophecies that Jews will inherit the land of Israel. Ardent followers also embrace literal interpretations of the Bible that a thriving state of Israel is a prerequisite for an apocalyptic end-time and the return of Jesus to earth. Often led by the charismatic leaders of megachurches, these grass-roots groups across the U.S. raise millions of dollars each year.

More than 270,000 Jewish settlers are estimated to be living on West Bank territory captured by Israel in 1967. They claim they have a right to be on the land, while Palestinians consider the West Bank part of a future Palestinian state.

Sondra Oster Baras is the director of Israel's branch of the Christian Friends of Israeli Communities — a liaison office for donors wanting to give to the settlements. At her office in the Karnei Shomron settlement, she sits amid posters and pamphlets that call for Jews to settle Judea and Samaria, the biblical name for the West Bank.

She estimates that more than half of the Jewish settlements in the West Bank receive direct or indirect funding from Christian communities.

Baras says donors can choose among several programs, including one called "adopt a settler," in which money goes toward the daily needs of the settlers: helping build new schools, health facilities and synagogues.

"Our major donors are themselves organizations or ministries or churches. They themselves have raised those monies in small amounts — $5, $20 from a line of people — and put it together, so it's very much grass-roots," she says.

Palestinians in Hebron say that they are outraged by the support these American groups give.

Because 650 Jewish settlers live in the heart of Hebron, Israel has erected checkpoints and closed off roads to the thousands of Palestinians in the city.

Huda Abar Khud has watched Christians pass by her Hebron neighborhood as they make their way to the Jewish settlers.

For their part, settler organizations are now worried that the money could begin to dry up.

Wilder says the Obama administration knows what is happening and could make it more difficult for Christians to directly fund Jewish settlements.

"Today, there are no secrets," he says. "In the United States, the people in the administrations there know who is helping whom, and how much money is coming over, and what kind of support is being given here and there and everywhere else. The question is, what is the counter to that?"

But no one in the settlements has begun pinching pennies yet. And no matter what happens, Wilder says, the settlements will remain — and he hopes so will Christian support of them.