Accessibility links
Going Gluten-Free At Age 13 Jacob Rosenblum has celiac disease, an autoimmune condition that keeps his body from processing foods with wheat gluten. Even though he can't eat his peanut butter and jelly sandwiches on wheat bread anymore, or most cereals, his family is finding new ways to cook gluten-free and keep him healthy. 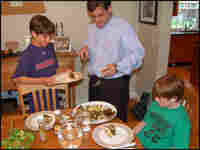 Since Jacob was diagnosed with celiac disease in 2008, the Rosenblums have tailored their family dinners to his gluten-free diet. Allison Aubrey/NPR hide caption 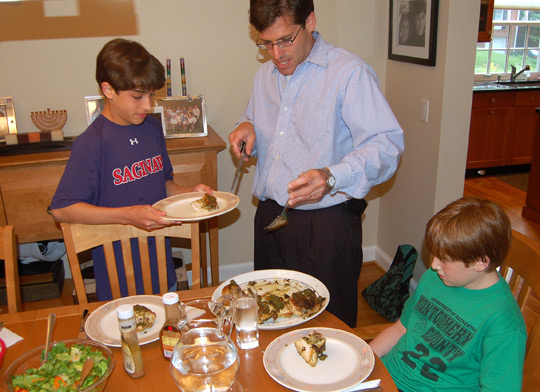 Since Jacob was diagnosed with celiac disease in 2008, the Rosenblums have tailored their family dinners to his gluten-free diet.

For more on the signs and symptoms of celiac disease, and for additional tips on cooking gluten-free, listen to this week's On Health podcast. 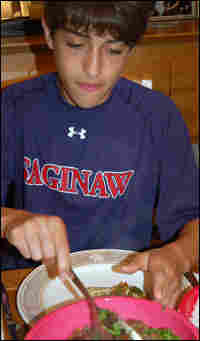 This quinoa, black bean and cilantro dish is a protein-rich, gluten-free meal. "It's tough and has more of a bitter flavor," Jacob says. "But it's still good." Allison Aubrey/NPR hide caption 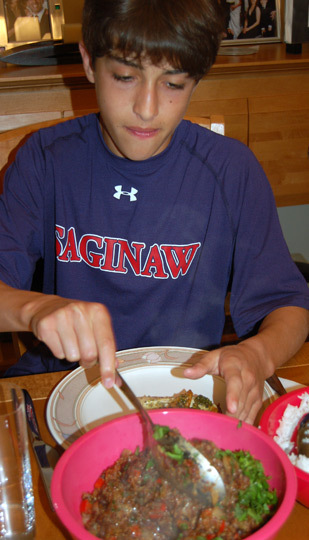 This quinoa, black bean and cilantro dish is a protein-rich, gluten-free meal. "It's tough and has more of a bitter flavor," Jacob says. "But it's still good."

The Rosenblum family makes these two gluten-free recipes from Bon Appetit: Quinoa With Black Beans And Cilantro and Chicken Breasts With Pistachio-Cilantro Pesto 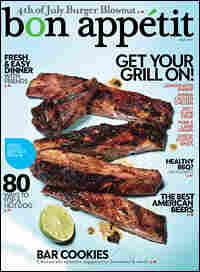 Jacob Rosenblum, 13, used to take peanut butter and jelly sandwiches on whole wheat bread to school for lunch. Then he learned that the gluten in the bread was making him sick. Last fall, he was diagnosed with celiac disease — an autoimmune condition that afflicts about 1 percent of Americans. Experts say it is likely that a few million people have the disease but don't know it.

Bloating and abdominal pain are common symptoms of celiac disease. And, while it's normal to pass gas, experts say that people with celiac disease often have a lot of smelly gas. Increasingly, experts have identified a broad range of additional symptoms that include hair loss, fatigue, canker sores, itchy skin rashes, and tingling in the hands and feet. See the National Foundation for Celiac Awareness for a complete checklist. A blood test is used to diagnose the condition.

Since Jacob was diagnosed in the fall of 2008, the Rosenblums have restocked their pantry. Jules Gluten-Free Flour has replaced Bisquick, and they use it to make the traditional Toll House chocolate chip cookies.

The Rosenblums have tried lots of new recipes. Recently, they've been turned onto red quinoa — a nutritious, protein-rich grain that is gluten-free. Jacob's father, Jay, tried a new black bean, cilantro and quinoa recipe from Bon Appetit recently. Jacob says the grain is similar to rice, but it has a funny texture and flavor.

"It's more tough, and it has a more of a bitter flavor," he says. "But it's still good." He says he eats a lot of corn- and potato-based foods.

"Utz chips are gluten-free," he says, as he points to the labeling on the bag. For lunch, his mom, Robin, reheats leftovers and packs them in a thermos. If they're in a rush, Jacob says, pocket sandwiches by the organic food company Amy's are easy to take and heat up.

Diagnosis Is The First Step To A Solution

Jacob used to have excruciating stomach pains. During seventh grade, he remembers dashing off to the bathroom during tests. "Then I had less time to take the test." And after sports practices, he'd come home doubled over in pain.

At the time, his family had no idea the pain was triggered by eating gluten — a protein found in wheat, barley and rye grains.

"It got to the point where I had to miss sports practices and games because I was so sick," Jacob recalls. "It was really painful."

His mom says that, in hindsight, she recalls Jacob having bouts of stomach problems. At one point, she'd suspected he was lactose intolerant, but the symptoms always seemed to pass. When she took him to the pediatrician, she was nervous.

"I thought there was something seriously wrong," she says. She had read about celiac disease on the Internet after searching around for clues. "It was in the back of my mind, so I mentioned it to the doctor."

At the time Jacob was being tested, she didn't know her husband carried the genes for the disease. When Jacob's blood tests came back positive for celiac, she was surprised.

The day after Jacob's diagnosis, she got a little teary in a grocery-story aisle after realizing how many foods contain gluten. It's not just breads and baked goods: The list includes soy sauces, salad dressings and many other processed foods. It stressed her out, but she says she realized pretty quickly how lucky they were.

"I was elated," says Robin. "There's no medicine, no surgery." She said it was such a relief to know he could get better by changing his diet.

Diagnosis And Diet Changes Lead To A Quick Recovery

Jacob's turnaround was quick. Once he gave up his peanut butter and jellies on whole wheat, along with his breakfast cereals and pasta, he says he got almost immediate relief.

"Within like one or two weeks of going gluten-free, I didn't have any symptoms I had before," Jacob says.

"In about 90 percent of patients, they get almost complete relief of whatever symptom they came in with — anything from hair loss to fatigue to diarrhea," says Dr. Daniel Leffler, who directs celiac research at the Beth Israel Deaconess Medical Center.

"With diet alone, the symptoms can really be almost completely ameliorated."

The symptoms of celiac disease overlap with many other conditions, and the symptoms come and go. In many instances, stress brings on an episode of intense symptoms. These factors help explain why people with celiac disease endure an average of 10 years of symptoms before getting the right diagnosis, according to the National Foundation for Celiac Awareness.

The Consequences Of Not Treating Celiac Disease

People with celiac disease have a hard time absorbing nutrients, and they are often fatigued due to anemia. The disease damages part of the small intestine called villi, which are absorptive, finger-shaped projections that line the intestine. Damage to the villi can put untreated celiac sufferers at higher risk of osteoporosis, diabetes and the onset of other autoimmune diseases, according to the celiac foundation. There is also evidence that untreated celiac disease may increase the risk of some cancers. 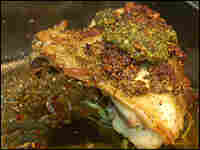 This recipe is reprinted with permission from Bon Appetit.

An unusual pesto made from pistachios and cilantro gives the chicken a Middle Eastern flavor.

No substitutions here: all these ingredients are naturally gluten-free. Jay Rosenblum says it looks more complicated than it really is. The key: a food processor for the pesto.

Total cooking time is about 50 minutes, with 25 minutes of prep time. Makes 4 servings.

Using fingers, gently loosen skin from 1 side of each chicken breast, forming pocket. Spread 1 tablespoon pesto evenly under skin of each. Sprinkle chicken generously with salt and pepper.

Heat 1 tablespoon olive oil in heavy large ovenproof skillet over medium-high heat. Add chicken, skin side down. Cool until skin is dark golden, about 5 minutes. Turn chicken over and transfer skillet to oven. Roast chicken until cooked through, about 25 minutes.

Quinoa With Black Beans And Cilantro

This recipe is reprinted with permission from Bon Appetit.

Robin and Jay Rosenblum say this dinner is a little fancy for a Monday night, but it's pretty simple and tasty. Hearty and high in protein, this can serve as the main dish. Quinoa is a great whole grain, gluten-free alternative. Or, you can substitute with rice, which is also gluten-free.

Heat oil in heavy medium saucepan over medium-high heat. Add onions and red pepper; sauté until beginning to soften, about 5 minutes. Stir in next 4 ingredients.

Add water; bring to boil. Cover, reduce heat to medium-low, and simmer until quinoa is almost tender, about 14 minutes.

Add beans and 1/4 cup cilantro; cook uncovered until heated through and liquid is fully absorbed, about 3 minutes. Transfer to bowl; sprinkle with 1/4 cup cilantro and cheese, if desired.