Accessibility links
Justices May Strike Down Part Of Voting Rights Act The law has been credited with breaking down barriers to minority voting, but some say its policies are unfair and outdated. According to sources, a team of Justice Department lawyers has been strategizing for weeks on a speedy response in case part of the act is invalidated. 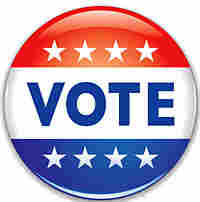 As the Supreme Court wraps up its term, the Justices seem likely to strike down a key part of the Voting Rights Act. According to sources in and outside of the Justice Department, a team of the department's lawyers has been strategizing in private for weeks to plan a speedy response to a potential loss in court.

The case, Northwest Austin Municipal Utility District Number One v. Holder, challenges the 2006 renewal of the 1965 Voting Rights Act. The act targets places with a history of discrimination against minority voters. Jurisdictions covered by the law need Justice Department approval to change their voting procedures. The law has been widely credited with breaking down barriers to minority voting and getting minorities into elected office, but the people who brought this lawsuit say the law's policies are unfair and outdated.

The Voting Rights Act is "really one of the crown jewels of the civil rights movement of the 1960s," says election law professor Rick Hasen of Loyola Law School Los Angeles. "For the court to now consider striking down a major portion of it would be at least symbolically monumental."

A Complicated Game Of Chess

When the Supreme Court strikes down a significant law, the Justice Department often comes back with a proposed change that would address the court's concerns. Sources say civil rights is such an important part of this administration's agenda that the Justice Department does not want to wait weeks or months to respond to a decision gutting the Voting Rights Act.

That's why lawyers at the Justice Department are playing a complicated game of chess right now, trying to forecast the Supreme Court's potential moves so the department has responses ready.

The leader of the Justice Department team is election law expert Sam Hirsch. He arrived at Justice a few months ago from private practice. Neither he nor anyone else at the Department would comment for this story.

"You could imagine, for example, the administration saying, 'OK, we now have an opportunity to rethink from the ground up what's the best way of ensuring that every American who wants to cast a vote is able to do so,' " says Stanford Law professor Pam Karlan. "They might revisit a whole host of issues that simply weren't on the table when Congress reauthorized the existing voting rights act in 2006."

Such issues could include voter registration, voter identification laws or polling place accessibility. But members of Congress would have to pass any new law, and they might not be eager to endorse a sweeping overhaul.

"I think it would be an enormously complex task and politically very challenging," says attorney Bill Yeomans. He spent 25 years in the Justice Department's civil rights division and recently worked for Sen. Edward Kennedy (D-MA) on the Judiciary Committee.

Yeomans says an easier fix might be to change part of the Voting Rights Act known as the bailout provision. When states or counties can show a judge that they have not discriminated against minorities in years, they can get an exemption from having to seek Justice Department approval for changes to voting procedures.

Of course, everyone in this debate is simply reading tea leaves. Only the Supreme Court knows how it will rule on this case. The Justices will issue their decision by the end of June.