Accessibility links
Israel's Netanyahu To Deliver Major Mideast Speech Israeli Prime Minister Benjamin Netanyahu delivers what is being billed as a major address Sunday, outlining his proposals for a revival of peace talks with the Palestinians. The speech comes amid tension in relations with the Obama administration over West Bank settlements. 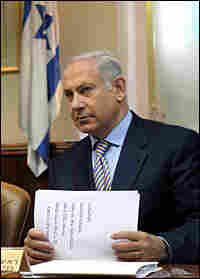 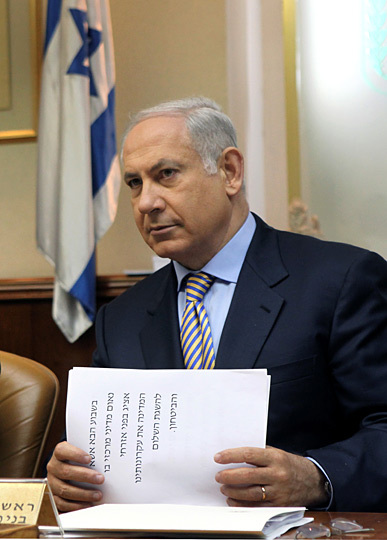 Israeli Prime Benjamin Netanyahu attends the weekly Cabinet meeting in Jerusalem, June 7. He is scheduled to deliver a major policy address on Sunday that lays out his plans to restart Middle East peace talks.

Israeli Prime Minister Benjamin Netanyahu will deliver a major speech Sunday outlining his proposals for reviving peace talks with the Palestinians. The speech comes at a time of tension in relations with the Obama administration, which insists that Israel must halt the expansion of West Bank settlements in order to allow a resumption of the peace process.

Israeli analysts say Netanyahu will express support for the "road map," a U.S.-brokered document adopted in 2003 that outlines a series of obligations that both the Israelis and Palestinians must meet.

It was devised by the Bush administration as a framework for negotiations to pursue lasting peace between Israelis and Palestinians. The road map requires Palestinians to abandon violence against Israel and make democratic reforms, while Israel must freeze settlement expansion and recognize and support a reformed Palestinian Authority.

In return for the resumption of peace talks, Netanyahu aides say, Israel will make a series of demands. Chief among them will be that Palestinians acknowledge Israel as a Jewish state.

Despite reports in the Israeli media that Netanyahu will embrace a "two-state solution" — Israel and a Palestinian state existing side by side — a Netanyahu adviser says the prime minister will demand conditions.

"Will he say two-state solution? My feeling is not. And I don't really think he should. We are in a process of a quid pro quo with the Palestinians, at least we should be. ... It's not just Israel giving and giving and giving and giving, and making unilateral concessions," says Zalman Shoval, a former Israeli ambassador to the U.S.

Instead, Shoval says the Israeli prime minister will set out a vision for some sort of future autonomous Palestinian entity — but with limitations.

At the entrance to the city of Jerusalem Thursday, a group of young Jewish settlers handed out fliers to passing motorists in advance of Netanyahu's speech.

In part, the fliers read, "Barack Hussein Obama is putting pressure on Netanyahu that is unrealistic and unfair. ... The people of Israel need to remember for whom they voted and remind Netanyahu that he needs to stand up to the Americans."

Attempting To Strike A Balance

Netanyahu leads a mostly right-wing coalition that strongly supports the West Bank settlers. But he also has to narrow the growing divide with the Obama administration.

Shoval says Netanyahu is a pragmatist.

"He is not a dogmatic ideologue. And therefore he understands that he will have to make an effort because of our relationship with the American administration," he says.

But there is only so much the prime minister should give, Shoval says.

He says Netanyahu will stand firm on the issue of settlement expansion, backing limited growth in large settlement blocks.

Shoval also says the prime minister may announce some goodwill gestures, such as the dismantling of some roadblocks in the West Bank and even possibly the easing of restrictions on goods going into the Hamas-controlled Gaza Strip.

Dimitri Diliani, a spokesman for the Fatah movement of Palestinian Authority President Mahmoud Abbas, predicts Netanyahu will try to navigate a course that will satisfy neither the Obama administration nor the Palestinians.

"I expect his speech to be, basically, a bunch of sentences beating around the bush — in a way not defying President Obama, but stressing on points that Palestinians cannot accept," Diliani says.

He says Palestinians won't call Israel a Jewish state because they believe it disrespects the roughly 20 percent of Israel's population who are Arabs and citizens of the state.

Diliani adds that peace talks should resume only after the settlement issue has been resolved.

"So talks will start right after [Netanyahu] announces that [Israel] will put a halt to all settlement activities in [the] occupied West Bank," he says.

Gideon Deron, who teaches at Tel Aviv University, says the situation between the Israelis and the Palestinians is at a deadlock.

Deron says Netanyahu has the difficult task of placating both the Americans and his own coalition.

"He has the room to maneuver. Does he have the guts? That's a different story. We'll see it on Sunday," Deron says.