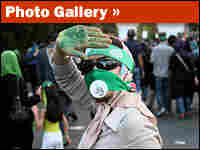 Iranian President Mahmoud Ahmadinejad says his overwhelming re-election was "free and healthy" and a reflection of the popular will. Ahmadinejad rejected allegations of vote fraud by his nearest rival, whose supporters clashed with police in the streets of Tehran on Saturday, a day after the election.

Election officials said Ahmadinejad gained more than 62 percent of the vote, compared with nearly 34 percent for his main rival, former prime minister Mir Hossein Mousavi. Mousavi issued a statement after the results were declared calling the count a "dangerous charade," and accusing the government of "manipulating" the vote.

U.S. officials reacted cautiously. White House spokesman Robert Gibbs issued a statement saying "like the rest of the world, we were impressed by the vigorous debate and enthusiasm that this election generated, particularly among young Iranians. We continue to monitor the entire situation closely, including reports of irregularities.

Secretary of State Hillary Clinton didn't mention the alleged irregularities. During a visit to Canada, she said, "The United States has refrained from commenting on the election in Iran. We obviously hope that the outcome reflects the genuine will and desire of the Iranian people."

Iran's supreme leader, Ayatollah Ali Khamanei, congratulated Iranian voters on what officials said was a record turnout of 85 percent, and he warned the opposition to avoid what he called "provocations."

Despite that, young protesters wearing Mousavi's green election colors threw rocks and scuffled with police. Police told reporters that a scheduled Mousavi news conference in Tehran on Saturday was canceled.

The election results surprised many observers outside the country, who had been predicting a close race between Ahmadinejad and Mousavi, with the possibility of a runoff if neither candidate got more than 50 percent of the vote.

Iran's Guardian Council proclaimed Saturday that the election was the cleanest in the 30-year history of the Islamic Republic. The council is an un-elected body of jurists and clerics that supervises politics in Iran. Its members decide which candidates are allowed to run for office, and they oversee election results.

"My own presumption is that [the] outcome was rigged," says Suzanne Maloney, a senior fellow at the Brookings Institution's Saban Center for Middle East Policy. "The facts we've been given so far -– that two-thirds of the voting public supported Ahmadinejad -– really strains credulity."

Maloney adds, however, "as a caveat, we don't know how far the public excitement about Mousavi had reached, whether it extended into the provinces."

Flynt Leverett, a senior fellow at the New American Foundation and a professor at Pennsylvania State University, says he believes this is a real victory for Ahmadinejad. "I think he's won big," Leverett says. "It's going to be interesting to see if Mousavi really persists in his line about election irregularities. You can't explain a margin this big with the kind of irregularities he's citing."

Leverett says Iran watchers in the West were indulging in "an extraordinary amount of wishful thinking" about the chances for a pro-reform vote. He says Western media didn't pick up on the fact that Ahmadinejad was perceived to be "a very clear winner" by the public in closely watched debates with Mousavi and other rivals.

He says Ahmadinejad succeeded in linking Mousavi with former president Ayatollah Ali Rafsanjani, who has been accused of acquiring a fortune through corruption. Ahmadinejad won the presidency in 2005 by defeating Rafsanjani in a runoff.

Mousavi, 67, was Iran's prime minister during the Iran-Iraq war but has been out of politics for nearly 20 years. He ran a pro-reform campaign that energized many younger voters, especially in Tehran, which is regarded as far more liberal than Iran's provinces. In the days just before the vote, his followers staged massive rallies that appeared to equal those of Ahmadinejad, leading to predictions of strong voter turnout that could favor reformists.

Ahmadinejad, 52, has been a favorite of working-class and rural voters, in part because he promoted spending programs aimed at helping Iran's poor. Mousavi and other opponents accused him of fiscal mismanagement that left the country with 25 percent inflation and high unemployment.

Ahmadinejad also has been a controversial figure abroad, refusing to suspend Iran's nuclear program despite United Nations sanctions. The Iranian government insists that the program is designed only for peaceful purposes, but the U.S. and other nations charge that Iran is really seeking to develop nuclear weapons.

Ahmadinejad has also issued statements that were widely interpreted as denying the Holocaust and Israel's right to exist. The U.S. has accused his government of supporting militias and terrorist groups in Iraq, Lebanon and the Palestinian territories.

Maloney says the election results are a message from Iran's ruling elite that is "blatant and unashamed."

"They want to make clear to the public that public opinion is not what they're concerned with," she adds.

Maloney says she believes the unexpected excitement generated by Mousavi's campaign worried Iran's leadership. "Khamenei and some around him looked at what was happening on the streets and saw the harbingers of a soft revolution."

She says the question now is whether Mousavi and his supporters will try to negotiate an outcome with the government, or whether they're willing to risk more confrontations between their supporters and the police. "Iranians have proven in the past that they're not willing to go to the streets in mass numbers," she says.

Leverett says the turmoil over the election results is likely to make it harder for Washington to accept the idea that it's going to have to deal with Ahmadinejad for another four years.

But even if Mousavi had won, Leverett says it's unlikely that Iran's basic policies would have changed. "Our comfort level with the Iranian leadership might have been better, but the U.S. administration is going to have to come to terms with the fact that this is a system, and on core issues of national security and foreign policy, at the highest levels of the leadership, there is fairly strong consensus."