Accessibility links
Urban Coyotes Have Streetwise Ways Look closely enough, and you'll find wild animals lurking in the alleyways of the most urban cities in America. And if you listen closely, you'll find coyotes are among the most vocal. Once confined to the Plains, these lanky canines now find refuge from hunters in populated areas. 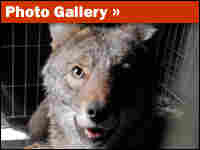 Coyotes In The City

When coyotes snarl and bark, yelp and howl just a few yards from your front door, the chills go straight to the base of your spine. I've seen this pack roam the city streets near my house. It's just a few miles from downtown Phoenix, and a few feet from a desert park. Darren Julian, who tracks urban wildlife for the Arizona Game and Fish Department, says this area is a sanctuary for urban coyotes.

Here, "coyotes and other wild animals have a place to escape and not be bothered," Julian says. "[They'll] hide under many of these creosote bushes or paloverde trees, but then go find food sources in your yard."

Julian says a pack of coyotes can claim up to 3 square miles of territory. Sometimes the only evidence of their existence is a hairy pile of scat left behind in some alleyway. They hide in overgrown yards. They den in oleander hedge rows and prowl the streets looking for colonies of feral cats to munch on. One morning, Erin Luker let her 8-pound Yorkie, Lucy, into the backyard with grim results.

"When she didn't come back inside, I went out to find her," Luker says. "I opened the door, I heard her yelp, and she ran back inside. She was just mangled."

Lucy died later that day. But as you quarantine your Chihuahua, you should know this: Urban coyotes actually do more damage to rats and goose eggs than anything else. That's according to Ohio State University's Stan Gehrt, who spent the past 10 years studying wild coyotes — in Chicago.

"At first we discovered there were many more coyotes living in the city than we had ever guessed." Gehrt estimates that more than 2,000 coyotes thrive in the Windy City, which is about 2,000 more than you might expect. Many thrive in the concrete nooks and crannies of the downtown Loop. His favorite lived virtually unseen near a retention pond right next to a post office.

"There were literally hundreds of people walking a few feet away from an alpha female coyote without ever knowing it," he says.

Gehrt says these animals are relative newcomers to cities like Chicago. He says that in the past decade, hunting in rural areas has pushed the animals into the urban fringe, where their biggest problem is now avoiding contact with the front wheel of a Hummer.

"And we're not nearly as good at killing coyotes with cars as we are with guns and traps," he says. "So their survival rate is actually higher in the city."

Five times higher, actually, for pups in the city compared to their siblings in the country. Gehrt says their success in places like downtown St. Louis, Washington D.C., and Phoenix depends on their secrecy. He calls urban coyotes "ghosts" of the city who emerge at night — on their own terms.