Accessibility links
Japan Pushes for Wider Whale Hunt One of the environmental movement's greatest victories – the 21-year-old ban on commercial whaling – could be reversed at the International Whaling Commission's annual meeting this year. Japan has been leading the effort to resume the hunts, but anti-whaling forces are trying to block the effort. 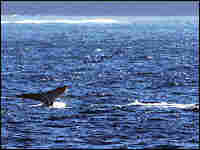 A humpback whale's fluke appears from the water as it dives in the waters off Sydney, Australia, June 14, 2006. Ian Waldie/Getty Images hide caption 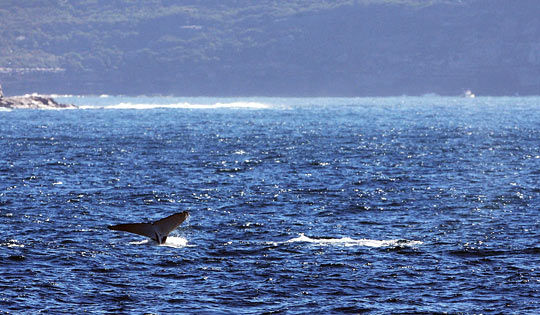 A humpback whale's fluke appears from the water as it dives in the waters off Sydney, Australia, June 14, 2006.

One of the environmental movement's greatest victories – the 21-year-old ban on commercial whaling – could be reversed at the International Whaling Commission's annual meeting this year. Japan has been leading the effort to resume the hunts, but anti-whaling forces are trying to block the effort.

Since 1986, the IWC has banned whale hunting with just two exceptions. Nations may take a certain number of whales for "scientific research" and aboriginal people are allowed quotas for subsistence purposes. Japan annually hunts about 1,000 whales under the research exemption, even though the meat routinely makes its way to the consumer market.

In Alaska, where the IWC meeting is taking place, a small plane, brightly painted with humpback whales taxied to a stop before a crowd of school children. Patrick Ramage has flown here from Cape Cod with artwork from kids asking the commission to keep Japan from killing more than a thousand whales this season. Henry, his 12-year-old son, was with him.

"We are bringing the artwork to the government officials to show them that whaling needs to stop," Henry said. His father, Patrick, of the International Fund for Animal Welfare, is a veteran of these meetings, and the older man said this time the outcome is too close to call.

"Japan wants to kill whales, if necessary they're ready to kill the IWC to do it," Ramage said. "We've seen a multi-year, persistent effort to recruit countries and achieve through the power of Japan's currency what they're unable to achieve through science or the powers of persuasion."

But Ramage and delegates of anti-whaling nations have done some recruiting of their own. The result has been a sort of arms race, as each side tries to find more votes. Laos, Croatia, and Cyprus are some of the latest allies in the fight.

At last year's IWC meeting, Japan rallied a one-vote majority for a resolution to end the ban. Although it would take a three-quarters vote to reverse the ban, the move was considered a symbolic victory for Japan.

He explained that the meeting of CITES, the body that manages international trade in endangered wildlife, comes right after the IWC meeting.

"CITES basically follows the line that the IWC takes," he explained. "So, if the IWC is saying 'we have a moratorium,' then CITES says, 'well, we'll have an international trade ban on all these whale products.'"

"What we are asking for is limited, regulated whaling for abundant species only," he said. "So, you don't need to lift the moratorium, and we think that regulations and control are very important."

At this meeting, the commission must also renew or reject a five-year bowhead quota for subsistence whaling. The last time this so called "aboriginal" quota was up, Japan tried to block it as leverage for resumption of its own whaling program. Morishita said it is only fair to approve both.

"As long as both of them are utilizing their local resources in a sustainable manner, I don't think there should be any different treatment," he said.

But anti-whaling nations and groups such as the World Wildlife Fund, said subsistence hunting — which involves tiny boats and a limited number of whales for cultural purposes — is far different from commercial whaling.

Simmonds of the Whale and Dolphin Conservation Society said with the IWC's membership expanding every day, it is impossible to predict the outcome of either issue.

"A the moment, the vote looks like the pro-conservation side probably just about has the majority, but it completely depends on who is sitting in their seats at a particular time, and it's so close," he said.

Key votes were planned for later this week.