Accessibility links
China's Gay Pride Week Mixes Celebration, Caution Described as "one foot firmly inside the closet," China's largest ever gay pride festival shows both how far the country has come — and the limits that still exist on official tolerance of homosexuality. The authorities, citing a lack of proper permits, stopped several events. 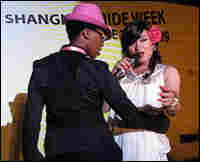 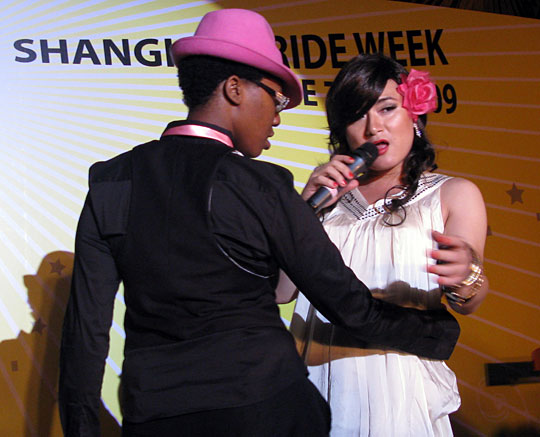 One of China's most famous jazz singers, Coco Zhao — known in drag as Cocolicious — takes the stage June 13 during gay pride week in Shanghai.

Described as "one foot firmly inside the closet," China's largest ever gay pride festival shows both how far the country has come — and the clear limits that still exist on official tolerance of homosexuality.

The authorities, citing a lack of proper permits, stopped several events in the weeklong festival that concluded Sunday.

But a panel discussion on gay cruising spots in Shanghai demonstrated how much has changed in China for the gay community.

Men used to gather at one newspaper board, a panelist told the audience of more than 100 people gathered at one of Shanghai's swankier restaurants. He described standing there, pretending to read the news.

"Your hands would be trembling as you edged closer to another man. You'd ask, 'What's in the news today?' If the other man had no idea, you'd know he was gay," the panelist recalled.

The concept of gay pride is so new that even Gao Yanning isn't entirely sure about it. He teaches China's first course on homosexuality at Fudan University in Shanghai.

"I'm not sure whether the meaning of pride is the same," he told NPR. "We don't say that. But I think it's a good word, and we can express we are gay and lesbian in this positive way, right?"

The official China Daily newspaper called the festival "a good showcase of China's social progress," an event of "profound significance."

But plainclothes police were evident at the Shanghai panel and videotaped the proceedings. Inspectors from Shanghai's administration of industry and commerce also closed down some events, including a film screening and a play, saying the venues didn't have the licenses needed to stage the events.

"That was very frustrating. We were confused because we'd just gotten praise from the government, and we didn't understand. So we had to cancel three events. We were worried that we wouldn't get to go on. But it was OK and we got through it," she says.

By Saturday, a daylong party was in full swing, with a hot body competition, a drag show and a fashion show. The police had visited just once to advise organizers to keep the numbers down.

On stage, one of China's top jazz singers was in drag as Cocolicious, wearing a white silk dress and lots of bling, singing with a woman in a snazzy black tuxedo and pink trilby hat.

"This is quite important, not only for me, for China, for the whole world. It's a great statement of how China's gay scene is ballooning right now," says Cocolicious, who's also known as Coco Zhao. For the singer and a younger generation of Chinese gay people, sexuality clearly has nothing to do with the state.

"I love my country, I would do anything to protect my country, as well, so I don't think anything will cause me trouble. If I dress up like a girl once in a while, be [homosexual], that's my personal [affair]."

During a charity auction, the crowd was in high spirits. But several people interviewed for this story requested that their jobs not be mentioned, for fear of retribution.

Yu Tian was happy and celebrating, his face painted with a rainbow. But he says that China still doesn't have true openness.

"I think this gay pride festival is allowed because it's organized by foreigners. When Chinese people try to do things like this, they often get closed down. In Beijing, three times the queer film festival was closed on its opening day," he says.

The day festival featured gay wedding ceremonies. Four couples, including two local ones, swap vows on stage. The ceremonies aren't legally binding, but they are sign of commitment for the couples.

One of the Shanghainese couples, Michael and Kurt, have only been together three months. "It's a good opportunity to let everybody know that we are lovers," Michael says.

However, Kurt admits his parents still don't know the two are an item. "They just know we live together," he says nervously.

On stage, the two men swapped pink and blue plastic rings, sweating under the spotlights with nerves. Then they kissed each other passionately, as the crowd cheered wildly.

Internet May Be New Battlefield

But China's gay men and women know they have battles ahead. One of the earliest could be against the Internet filtering software that must be provided with all new computers beginning July 1.

The software blocks access to, among others, any sites using the word "homosexual" — at a stroke blacklisting those gay community Web sites that helped make Shanghai gay pride week a reality.

"They are not more tolerant, but they cannot control it, because it's the trend," he says. "They choose not to do anything now, maybe [they want to] see what's going to happen [if they don't do anything] and they would adjust afterwards."