Accessibility links
Part Swamp and Part Soul-Stomp The diversity of songs and styles makes Dale Hawkins' LA, Memphis & Tyler, Texas an odd artifact: It's part Southern boogie and part sun-kissed psychedelic rock, yet it feels like an original stew rather than a patchwork.

LA, Memphis & Tyler, Texas was made at a time when many in the music business functioned in several capacities — as producers, scouts and artists. What are some of the best examples of records made by business insiders?

Heavy on My Mind 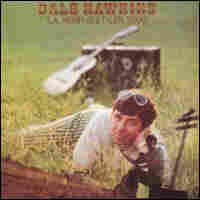 Louisiana-born guitarist, singer and songwriter Dale Hawkins owns one of the most unlikely resumes in rock 'n' roll. He's the author of the swamp-rock classic "Suzy Q," which he recorded for the powerhouse blues label Chess in 1957; it's been covered countless times since, most famously by Creedence Clearwater Revival. After four years at Chess, Hawkins hosted a TV dance party, worked as a DJ and eventually went behind the scenes, landing a job at Bell Records as a producer and talent scout. Among his successes was "The Letter," a massive hit for The Box Tops. Hawkins then went on to work for the rock division of RCA Records, where he shepherded works by Michael Nesmith and Harry Nilsson, among others.

While still at Bell, Hawkins began working on his second solo album. With help from the amazing guitar triumvirate of Ry Cooder, Taj Mahal and James Burton (the guitarist who backed Elvis Presley, Ricky Nelson and others), he put together loose, irreverent, wholly original renditions of blues and rock classics, among them Jimmy Reed's "Baby What You Want Me To Do" and Presley's hit "Hound Dog" (audio). As Hawkins recalls in the liner notes of the Rev-Ola reissue, "The tracks needed a lot of work." So he took them to Memphis, where, with help from Dan Penn and Spooner Oldham, they underwent significant tweaking. (In some cases, the famed Memphis Horns were added.) Hawkins then went to Tyler, Texas, where he recorded lead vocals on several of his own tunes, including the hard-charging "Heavy on My Mind" (audio).

Hawkins and his Tyler backing band, Mouse and the Traps, also did a version of "Ruby, Don't Take Your Love to Town" (audio), which had been a hit for Kenny Rogers. Sung from the perspective of a crippled war veteran, it's a disconcerting song made more so by Hawkins' dramatically unhinged vocal, as well as the band's fitful groove, which is punctuated by odd stops and starts. Where Rogers plays up the sadness of the situation, Hawkins gets at something darker: a proud man's almost uncontrollable rage.

The diversity of songs and styles makes LA, Memphis & Tyler, Texas an odd artifact: It's part swamp and part soul-stomp, part Southern boogie and part sun-kissed psychedelic rock, yet it feels like an original stew rather than a patchwork. Even if it had been easily classifiable, the album faced long odds: It was released just as Bell was being sold to the larger Screen Gems, and this and other projects fell through the proverbial cracks. It wasn't until 2006 that the obsessive fans at the British Rev-Ola label gave it the reissue it's long deserved.