Accessibility links
Conservatives Have 'Originalism'; Liberals Have ... ? Conservative Supreme Court nominees espouse originalism, the theory that the Constitution's meaning remains static. With Sotomayor's nomination, liberals are looking for a way to sell their own view that interpretation must reflect the changing norms of society. 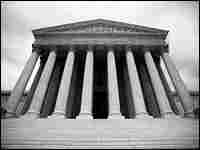 Each Supreme Court nominee over the past 15 years has ascribed to the conservative legal theory known as originalism, which seeks to interpret the Constitution the way it was written. Sonia Sotomayor's nomination changes that. iStockphoto.com hide caption 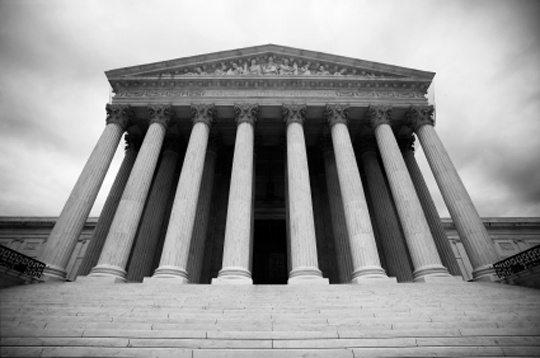 Each Supreme Court nominee over the past 15 years has ascribed to the originalist conservative legal theory. Sonia Sotomayor's nomination changes that.

A collection of theories calling for adherence to the "original intent" of the creators of the Constitution. Types of originalism include strict interpretation and strict constructionism.

Constitutional law scholar Paul Brest, the former dean of Stanford Law School, is thought to have coined the name.

"The Constitution is not a living organism, it is a legal document. It says something and doesn't say other things." — Justice Antonin Scalia

"Very often, the history simply does not tell you the answer." — Justice Stephen Breyer

A few years ago, the online magazine Slate hosted a contest. Senior Editor Dahlia Lithwick asked readers--If you don't believe in interpreting the Constitution the way it was written more than 200 years ago, what do you believe in?

"The left was in this funny defensive crouch," says Lithwick. "It was saying, 'Whatever we're for, we know we're not for [Supreme Court Justice Antonin] Scalia and originalism.' "

Scalia is the bete noir of the liberal legal establishment and the prime spokesman for the view that the meaning of the Constitution does not change over time. He defended his position in a 2008 NPR interview, saying, "If you somehow adopt a philosophy that the Constitution itself is not static, but rather it morphs from age to age to say whatever it ought to say — which is probably whatever the people would want it to say — you eliminate the whole purpose of a Constitution. And that is essentially what the so-called living Constitution leaves you with."

On Slate.com, Lithwick asked for a liberal counterargument, and the mail poured in. "I think the conclusion was originalism just has a better agent," says Lithwick. "They have better PR, and living constitutionalism has really lost the PR war and needs better representation."

That was four years ago. Now, liberals are back in the fray.

A Unique Time To Present A Countertheory

They see this as a unique moment in American history: the first time in decades that progressives could actually win the legal debate over theories of constitutional interpretation.

For the first time in 15 years, the country is evaluating a Supreme Court nominee who does not believe in originalism. The president is a Democrat who used to teach constitutional law. And progressive legal scholars have published a pile of books exploring the best alternative to conservative legal theories.

"In the public debate, it has been a great challenge for the liberal and progressive side to capture this notion in a bumper sticker," says Goodwin Liu, editor of the new book Keeping Faith with the Constitution. Liu teaches law at the University of California, Berkeley, and he chairs the board of the American Constitution Society, a progressive legal group.

Philosophies In The Running

As Liu points out, President Obama recently added another word to the mix.

"We have felled many trees coming up with a term," says Liu, "and then President Obama mentions a single word — empathy — and the entire debate swirls around that word."

In a news conference after Supreme Court Justice David Souter announced his retirement, Obama said, "I view that quality of empathy, of understanding and identifying with people's hopes and struggles, as an essential ingredient for arriving at just decisions and outcomes."

Obama has long advocated a view that the Constitution must be interpreted to reflect the changing norms and understandings of an evolving society. In his book The Audacity of Hope, he wrote, "Before the ink on the constitutional parchment was dry, arguments had erupted, not just about minor provisions, but about first principles. Not just between peripheral figures, but within the revolution's very core."

Yale law professor Reva Siegel is one of the progressive legal scholars at the forefront of this debate. She argues that judges can neither ignore the past nor give it unquestioning loyalty.

"The Constitution is neither an agreement that was made by persons long dead, nor is it something that simply reflects the understandings of living Americans," Siegel says. "In fact, it's a living tradition that links the struggles, commitments and beliefs of Americans past, present and future."

Balkin argues that the Founding Fathers intentionally made some passages of the Constitution very specific — such as the requirement that the president be at least 35 years old — and other passages intentionally vague.

"They spoke in general terms because they expected that people who came along later would have to do their part," Balkin says. "They would have an obligation to continue the project."

"I think that's gobbledygook," says Eric Posner, University of Chicago law professor. "It's just kind of a pun on what fidelity means."

Posner says he believes neither in originalism nor in the academic philosophies that liberals are describing.

Posner says he believes everyone is trying to disguise the fact that judges are basically political actors, on the left and right.

Even if these progressive ideas take hold, the courts will not shift any time soon. The Supreme Court has five solid conservative votes, and one new nominee won't change that.

Balkin is not worried.

"My view of the Supreme Court is sort of like the husband in the French farce," Balkin says. "He's always the last to know."

Balkin adds, "Essentially, stop bothering about the Supreme Court. Start thinking about what the Constitution means in the general public. The courts will catch up in good time."

Justice Scalia, the Great Dissenter, Opens Up April 28, 2008
Obama Could Appoint 2 Supreme Court Justices Jan. 2, 2009
The New Republic: What I Hope The Supreme Court Battle Will Look Like May 11, 2009