Howard County's health commissioner, Dr. Peter Beilenson, is in charge of a new program in Maryland that offers low-cost insurance to those who are eligible. But not many people are signing up. Katie Hayes/NPR hide caption 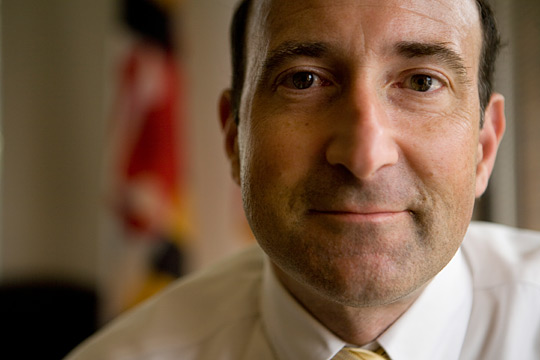 Howard County's health commissioner, Dr. Peter Beilenson, is in charge of a new program in Maryland that offers low-cost insurance to those who are eligible. But not many people are signing up.

Eligibility: People who live in the county whose incomes are no more than three times the poverty level

With health care overhaul back on Washington's agenda, NPR went to one locale to see how the big national issues play out there. In Howard County, Md., near Baltimore, we spoke with patients, doctors, administrators and employers about the costs of health care and access to the health care system.

Howard County is not typical: It's rich. It's progressive. Maryland's state government sets hospital fees. The local hospital is part of the elite Johns Hopkins system. And last year, the county launched its own program for the uninsured.

About 275,000 people live in Howard County, and about 20,000 of those people have no health insurance. (The figure does not include illegal immigrants.)

Last fall, the county launched a special program called the Healthy Howard Access Plan to provide the uninsured with access to health care. It's still very new, but it offers lessons that could be applied nationwide.

Howard County Health Commissioner Peter Beilenson is in charge of the program.

For between $50 and $85 per month, he says, each person who qualifies gets six or seven visits to the primary care center per year, depending on whether the person is male or female. Under the plan, hospital and emergency room costs are waived, as are charges for about 17 specialties, including mental health. Many prescriptions are free, or are subsidized.

"We have prescription medication subsidies for those that we are unable to get for people for free," Beilenson says. "We are leveraging existing pharmacy assistance programs that Big Pharma has out there — that almost no one who is uninsured knows about."

And every person in the plan is assigned to a personal health coach who develops a health action plan, Beilenson says.

One recent morning in Rockburn Park in Elkridge, Md., Van Wensil met with her health coach, Maureen Pike. Wensil, who has chronic obstructive pulmonary disease, lost her health insurance after her divorce several years ago. She is unemployed, in her mid-50s.

This was their second meeting: in person, in an informal setting, on neutral ground. No office. No waiting room. No white lab coat.

"There's just no pressure on me," Wensil says.

Pike had created an action plan for Wensil. The emphasis of the action plan is on a healthful lifestyle, on taking responsibility for oneself. The point is to keep people healthy and out of the hospital emergency room.

Part of Wensil's plan is to get new walking shoes — and she says she'll do it when her daughter comes to town in two weeks. "I'm not a shopper," Wensil says with a laugh.

What Wensil is most pleased with is that Healthy Howard negotiates great bargains on her four drug prescriptions.

Beilenson is both proud of the Healthy Howard program and mindful of the cautionary lessons he has learned in its first few months.

The first lesson he learned is that the ranks of the uninsured include a lot of people who are actually entitled to existing public coverage. Of those 20,000 uninsured in Howard County, 5,000 were children. About 25 percent of them were enrolled in short order in the existing Children's Health Insurance Program, also known as CHIP.

Of the 15,000 adults younger than 65 who were uninsured, about one-third of them also turned out to be eligible for some existing state or federal health plan, even though they didn't know it or hadn't bothered to enroll.

Beilenson says that confirms what people think about the uninsured, nationally.

"All the studies we've seen nationally show that between 25 and 30 percent of the uninsured in the country are eligible for existing entitlement programs and either don't know it or don't sign up," Beilenson says. "That is an important lesson to be learned. Because of the 48 to 50 million uninsured Americans, you could say — even to be conservative about it — 10, 12, 14 million of them, you don't have to have any new program whatsoever. You just have to do better outreach and better targeting of people to get them enrolled in those programs."

But words like "outreach" and "targeting" turn out to be much easier said than done, which leads to lesson No. 2.

Of the 10,000 uninsured adults who were eligible for Healthy Howard — people whose incomes are no more than three times the poverty level — only 200 people fully enrolled in the program that was designed specifically for them. An additional 390 are in the queue, which means they have passed the screening and are eligible, and are in the process of providing documentation to get enrolled. Total, that's not quite 600 people — less than 6 percent of the 10,000 who are eligible. And the program has been up and running for seven months.

Beilenson admits that if the program had been deluged with thousands of applicants from Day 1, it would have been overwhelmed. But if health coverage is the huge concern that some say it is, and Healthy Howard has such a low price tag, why have so few people enrolled? Beilenson attributes the low numbers to the "young invincibles" in their 20s and 30s who think they're going to live forever.

"The costs are somewhat problematic, even though it's very reasonable: $50 to $85 per person per month — far less than insurance," Beilenson says. "Nonetheless, it is something, and for a lot of people who are having trouble holding jobs during this recession or have lost their jobs, economics plays some part of it."

Even the cheapest health care program will strike some low-income working families as too costly.

Beilenson and others cite another reason for the low enrollment: There just isn't adequate public awareness. The county has now added a marketing budget to get the word out.

But the paltry enrollment figures have also confirmed Beilenson's belief in the need for a reform that isn't even on the table in Washington.

"I am 100 percent convinced that if we are going to have comprehensive affordable quality coverage for all and spread the risk amongst the entire population, you have to have individual mandates," he says.

That means people would be required by law to have health insurance, something President Obama campaigned against.

Here's another question posed by Healthy Howard. The average American adult spends almost $8,000 per year on health care. The Howard County program charges no more than 10 percent of that. But it makes ends meet, in part, by getting specialist care donated pro bono.

With just a few hundred potential patients, that's handled easily enough. But if the program were better subscribed, specialists would probably not donate that much service free of charge, and — if they were reimbursed — the costs of the program would obviously mount. Then the question is: Who pays?

Beilenson is a medical and public health professional, but he also knows a few things about politics. He grew up as the son of a California Democratic congressman. He was health commissioner of the city of Baltimore and ran second in a Democratic congressional primary there.

Can Washington cut through the Gordian knot this time? Or could it make some small incremental improvements? He says he thinks big reform is possible — and he's "very much not an incrementalist."

"This is one of the rare instances, certainly in a generation, where at least most of the stars are coming together at the right time," Beilenson says. "My experience has been overwhelmingly, here in Maryland particularly, that if you make incremental changes, that's it for the entire term, the entire session. The cuts at the Gordian knot are twofold: If the federal government has an individual mandate plus subsidizes the cost to help those who couldn't otherwise afford it get it, I think that is the only way we are going to get to universal coverage."

Beilenson's aims may sound a lot more palatable in a wealthy county, in a liberal Democratic state, than they do elsewhere in the country. They do reflect his experience of Healthy Howard.

The incentives are impressively crafted, but — so far — they haven't gotten the county's uninsured to sign up in significant numbers.