Accessibility links
Sarah Siskind: Surveying The Wreckage In "Say It Louder," Siskind second-guesses a failed relationship, her voice exuding the ache of disappointment. Looking back, she's not really wishing she'd done anything differently, so much as she's wishing she'd done more: "If I had the chance to say it again," she sings, "I'd say it louder." 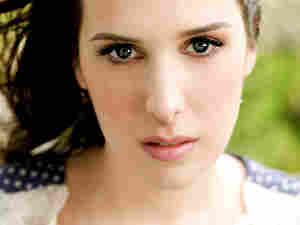 "Say It Louder" finds Sarah Siskind looking back on a failing relationship and wishing she'd done more. courtesy of the artist hide caption

Though she's self-released several fine records and worked with guitarist Bill Frisell, Nashville-based singer-songwriter Sarah Siskind is finding a new audience through the fandom of Bon Iver, which often performs her song "Lovin's for Fools" at its concerts. A few years ago, having a song covered in a few scattered encores wouldn't mean much, but in the YouTube age, fans don't need to pay the cover to see and hear it performed in New York City or Milwaukee or, with Siskind herself, in Nashville.

Now, with a bit of name recognition on her side — and a few tours with Bon Iver under her belt — Siskind is releasing Say It Louder, a fine new album that splits the difference between confessional folk and the rootsy side of her hometown country-music scene. Marrying her warm, sweet twang to winsome ruminations on love, loss and regret, the disc won't disappoint those who know her only for having written one great song. (Believe it or not, Bon Iver doesn't quite do her version of "Lovin's for Fools" justice: It's an absolute knockout.)

The title track to Say It Louder is particularly ingratiating, as Siskind second-guesses a failed relationship, her voice exuding the ache of disappointment. Surveying the wreckage, she's not really wishing she'd done anything differently, so much as she's wishing she'd done more: "If I had the chance to say it again / I'd say it louder," she sings. Along the way, Siskind imparts a lesson or two about missed opportunities — "Love doesn't slip away / You let it" — but "Say It Louder" isn't about hindsight so much as wishing she never had to look back at all.